More than 600 Pinot Noir fanatics descended on Wellington in New Zealand earlier this month to take part in what organisers described as “the best Pinot Noir event on the planet” – Pinot Noir NZ 2017. While it does have some competition for that title, the event proved New Zealand’s unbridled passion for Pinot, offering attendees three days of tastings, talks, hot tubs, Kiwi cuisine and entertaining events on an impressively ambitious scale.

Over three days, New Zealand’s entire wine industry gathered alongside a host of international sommeliers, buyers and writers to debate all things Pinot, letting their hair down in the process, in true Kiwi fashion. It was the sixth time that the Pinot Noir NZ event had been held, hosted every four years, with 115 New Zealand wineries showcased this year representing seven regions.

Actor and winemaker Sam Neill was among the attendees, as was James Maynard Keenan, the frontman of US rock band Tool and now Arizona-based winemaker, Jancis Robinson MW, Australian wine writer Mike Bennie and Professor Dame Anne Salmond, who in 2013 was named New Zealander of the year.

the drinks business was in attendance for the three-day celebration, with this pictorial snapshot highlighting the thrills and spills of a typically Kiwi celebration of New Zealand’s most revered red grape – Pinot Noir.

Click through for a pictorial snapshot of the three-day event… 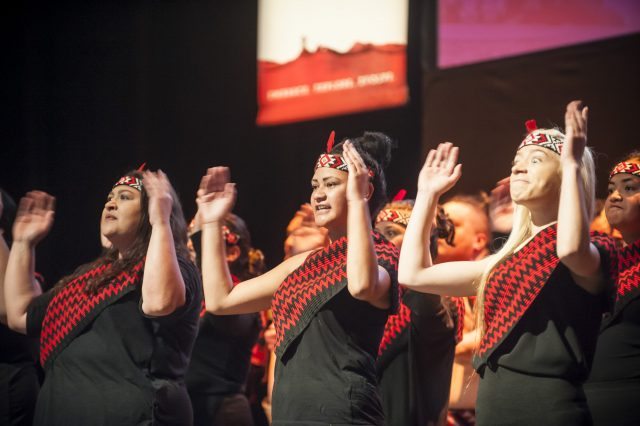 The event kicked off in true Kiwi style with the country’s First Nation Maori people honoured by the organisers in a ceremony that involved a traditional Pōwhiri welcome. 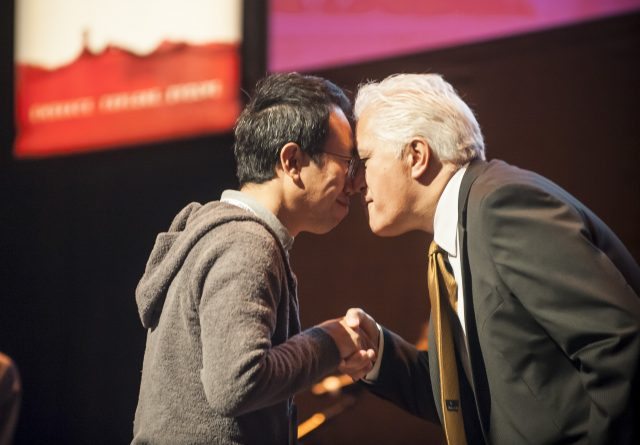 Kenichi Ohashi MW receives a traditional ‘hongi’ greeting – an act which involves touching one’s nose and forehead to another person’s. In the Maori culture it is considered the equivalent of a formal handshake. 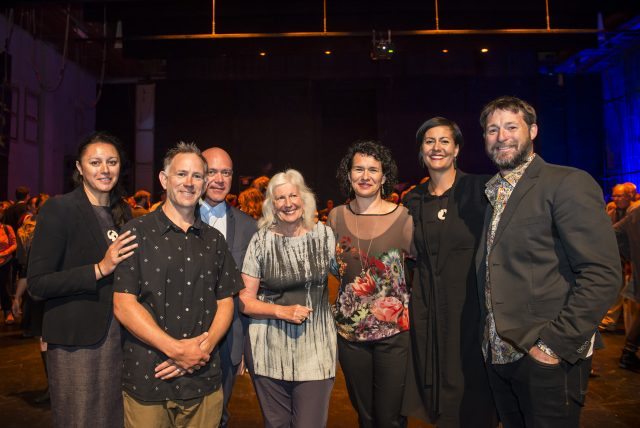 The first day of discussion centred on the exploration of ‘Turangawaewae’ – a Maori concept which refers to the places we feel especially empowered and connected to – and how this translates into the world of wine. Speakers included Rachel Taulelei, CEO of Kono NZ (Tohu Wines and Aronui), Professor Dame Anne Salmond, 2013 New Zealander of the Year, and the enigmatic Nick Mills, winemaker at Rippon in Wanaka, Central Otago. 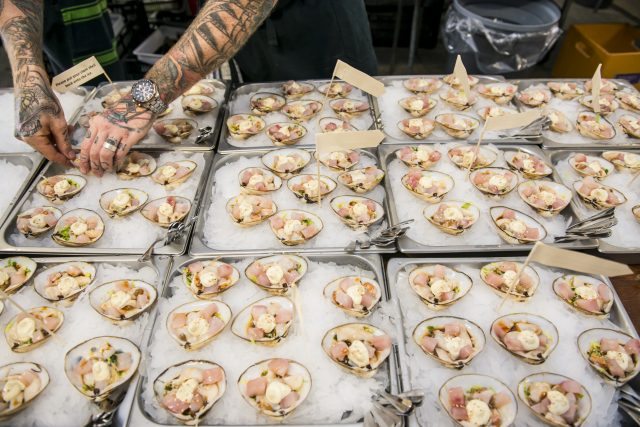 Lunch was not taken lightly, with a slap up lunch provided daily some by of New Zealand’s top chefs. The first, created by New Zealand chef Al Brown, featured Trevally sashimi and Cloudy Bay storm clams with seaweed salad, ginger and lime syrup and wasabi mayonaise. 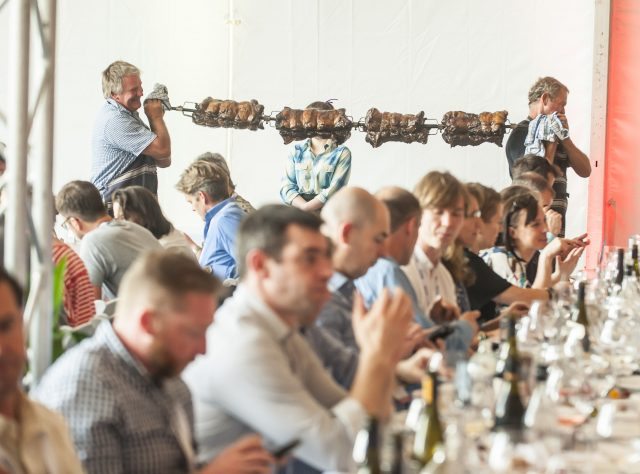 Brown’s sous chefs heave a rack of freshly roasted lamb shoulder to the kitchen for preparation, providing the first day’s main course. Day two saw chef Graham Brown take to the kitchen to whip up a selection of plates focused on grass-fed New Zealand venison, while Josh Emett wrapped up the culinary programme with a menu that included smoked salmon, seaweed butter and king fish sashimi. 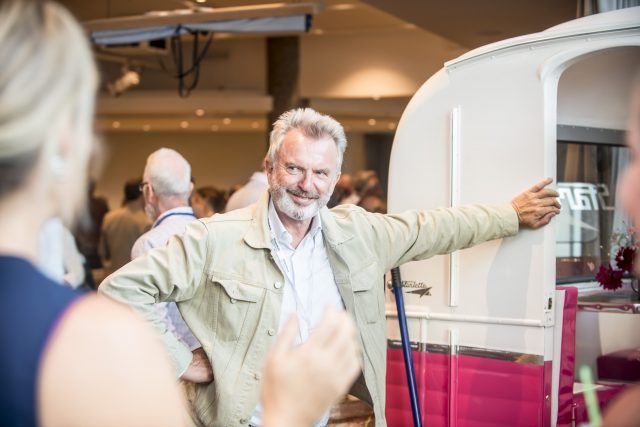 Actor and winemaker Sam Neill was among the attendees and speakers at the event, presenting his Two Paddocks Pinot Noir from Central Otago…. 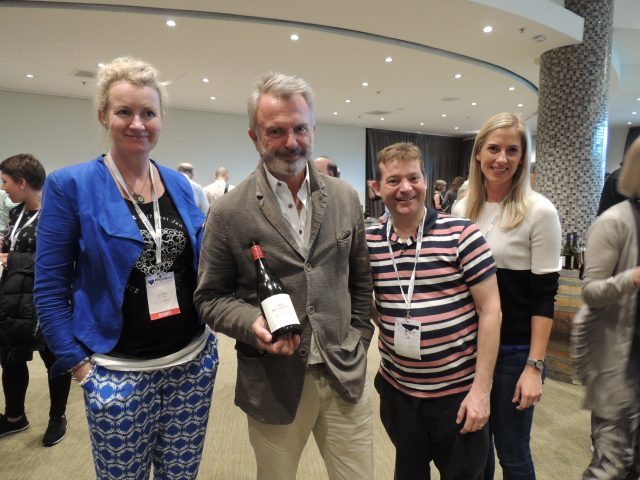 …. and was gracious enough to pose for the camera, pictured here with Jacqui Murphy, manager of Two Paddocks, and two of the NZ Winegrowers team, Chris Stroud, marketing manager for Europe, and communications manager Sarah Szegota. 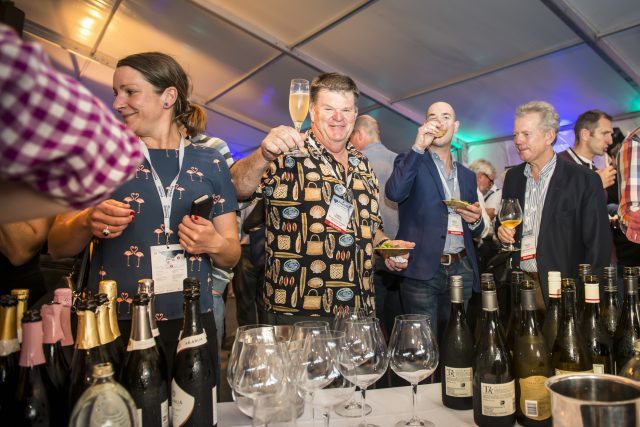 Larry “Mr Pinot” McKenna raises a glass at the Pinot Pavillion on Wellington’s waterfront – the location of much conviviality over three days of entertainment. Larry is the winemaker and owner of Escarpment in Martinborough in the Wairarapa Valley, and also consults with other wineries, including Sam Neill’s Two Paddocks. 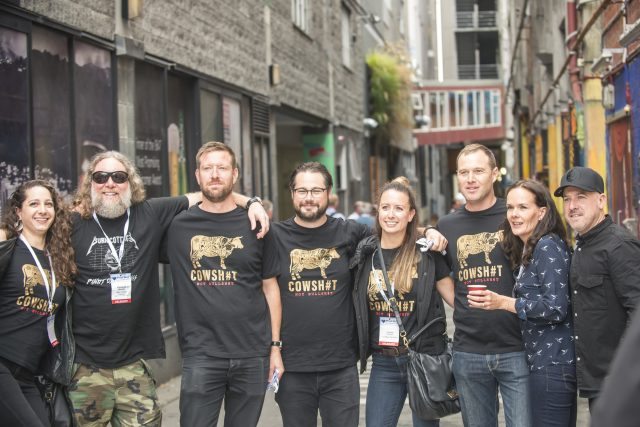 Winemakers Anna and Jason Flowerday (second and third from the right), of Marlborough’s Te Whare Ra winery, lead their band of supporters brandishing their motto ‘cowshit not bullshit’, referring to their no nonsense, organic approach to winemaking. 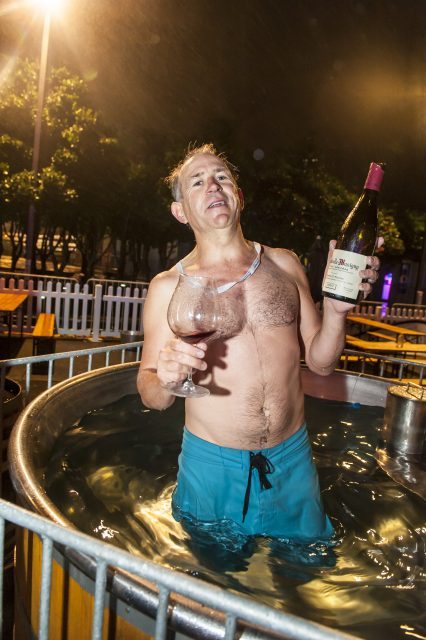 The wonderful Nick Rippon of Rippon wines in Central Otago made good use of the hot tubs provided, enjoying what looks suspiciously like a bottle of French Burgundy… 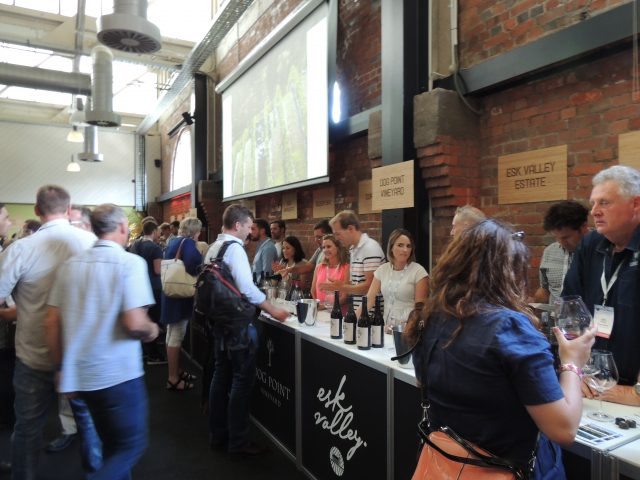 The event also featured free pour ‘Road Trip’ tastings of New Zealand Pinot Noir, with guests free to visit one of three tasting rooms each afternoon. Each road trip tasting showcased the wines of  a different collection of regions, from Central Otago and Waitaki; Auckland, Hawkes Bay, Wairarapa and North Canterbury; and finally Nelson and Marlborough. 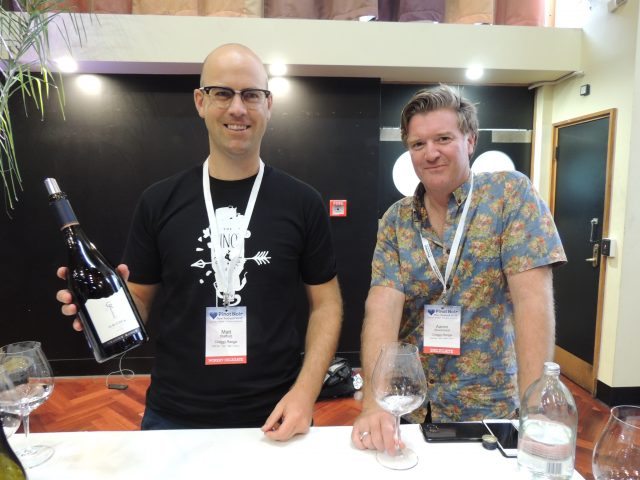 Winemaker Matt Stafford and Aaron Drummond of Craggy Range show off their Pinot in the Hawke’s Bay portion of the Road Trip. 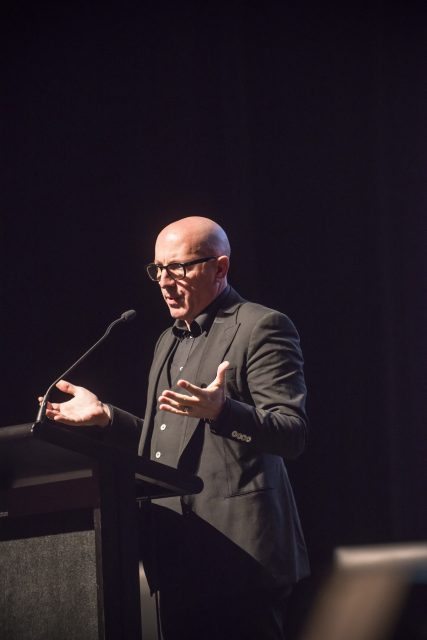 Among the speakers was James Maynard Keenan, frontman of the US rock band Tool, who now makes wine under his Caduceus Cellars winery in Arizona. During his speech, Keenan spoke of the challenges posed by Arizona’s hostile climate, but how more winemakers are gradually establishing vineyards in the region and helping its economy to thrive, providing jobs to families living there.

“I’m not the only one in Arizona, but I am one of the crazy ones,” he said. “We have an industry with 100 wineries growing everything under the sun. It’s an extremely diverse area.” 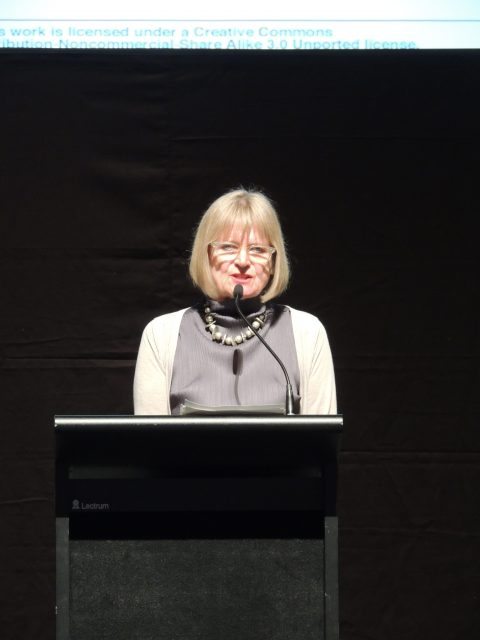 Jancis Robinson MW was also among the event’s attendees and was one of its keynote speakers, delivering a presentation during the third day on the various research being undertaken on microbial terroir. 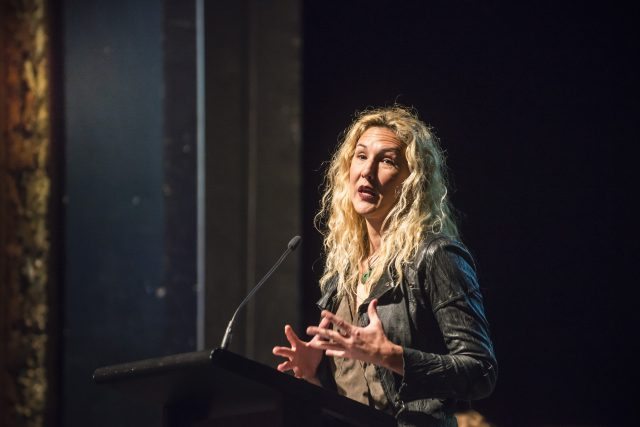 Wine writer Elaine Chukan Brown delivered a moving closing speech drawing upon New Zealand’s Maori roots and the concept of Turangawaewae and her own Inuit heritage, having been born and raised in Alaska. Elaine is now the US specialist for jancisrobinson.com, but first became known for her illustrated tasting notes and wine reviews via her Hawk Wakawaka Wine Reviews site. 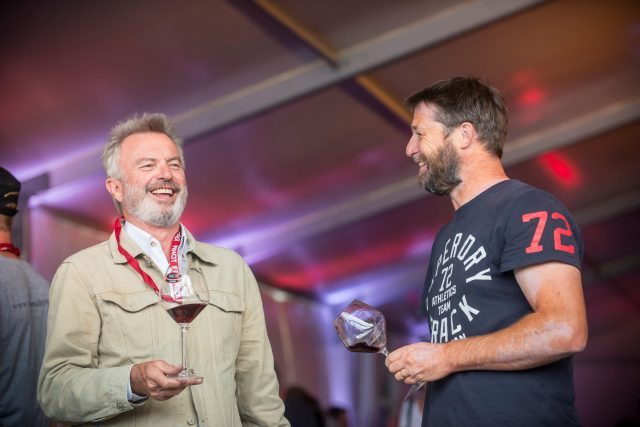 Ben Glover, chair of Pinot NZ 2017 (pictured here with Sam Neil), closed the sixth Pinot NZ 2017, with the date of the event’s next outing no doubt ringing in his ears. The seventh Pinot NZ will take place in 2021, in what will be the event’s 20th anniversary.