Inspired by the opening scene of Terrence Malick’s 1998 war epic A Thin Red Line, the Absolut Art Bar will set up camp at Potato Head from 17 March–2 April as part of Hong Kong’s Art Week 2017.

Absolut has teamed up with Hong Kong-based artist João Vasco Paiva for the project entitled Room Service and Kamil Foltan of Potato Head has created a series of Absolut cocktails (HK$128) in conjunction with Paiva. Inspired by ‘castaways’ – both real and imagined such as Private Witt, Fletcher Christian and Paddy Button – the cocktails use exotic ingredients including Sichuan pepper infused maple syrup, peat bitters, basil and lemongrass.

“Room Service is a moment in time in which visitors will have the opportunity to escape their daily realities and be immersed in a new world. I wanted to recreate the feeling that Sargent Witt had in A Thin Red Line as he wandered lost around the atoll within an environment that was intrinsically Hong Kong-based,” said Paiva.

Click through to discover the artsy cocktails on offer at Potato Head. 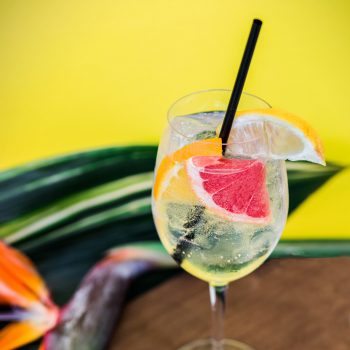 In the beginning of Terrence Malik’s A Thin Red Line, Sargent Witt wanders through a Melanesian atoll. He drifts, swims, paddles, in clear turquoise waters, white sand and lush vegetation, while he questions the nature of conflict between man and between nature, conflict as a catalyst for progress within mankind and within nature itself.

The pensive Private Witt cocktail is made with Absolut Blue, Lillet Blanc, tonic water, sugar syrup, garnished with slices of lemon, grapefruit and orange and served in a wine glass. 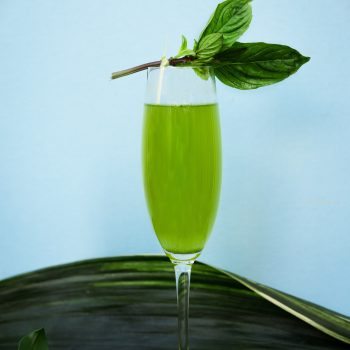 Fletcher Christian was master’s mate on board the HMS Bounty during Lieutenant William Bligh’s voyage to Tahiti for breadfruit plants.

In the Mutiny on the Bounty, Christian seizes command of the ship from Bligh and from then on, was considered an outlaw.

The feisty Fletcher uses Absolut Elyx, lemon juice, lemongrass syrup, basil leaves, Chartreuse and is topped with Champagne and strained into a chilled flute glass served with a sprig of fresh basil. 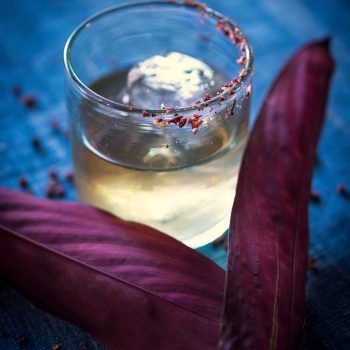 Paddy Button was the galley cook who together with two children survives a shipwreck in the novel The Blue Lagoon.

On the island, he finds a barrel of rum, from which he – with very good reason – drinks every evening before dancing and then eventually succumbing to the demon drink.