Cognac exports reached their highest ever level in 2016, driven by the expansion of the North American Free Trade Agreement (Nafta) zone, according to the Bureau National Interprofessionnel du Cognac (BNIC). 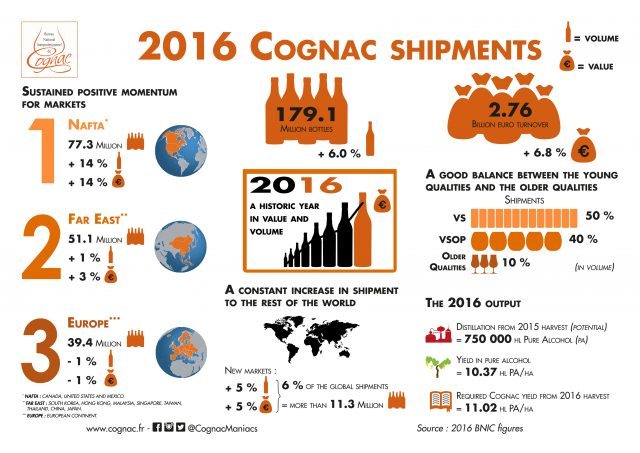 Such rises have been attributed to a steady increase in shipments to the US – Cognac’s largest market for the past 25 years – with 74.1 million bottles shipped in 2016 alone.

Exports to the Far East were stable during the same period, with export volumes up 1% to 51.1 million bottles and value up 3%. A stabilising Chinese market remains an important factor in levelling regional results, BNIC said.

These figures contrast with those for Europe, where difficult economic conditions have contributed to a slight decline in total shipments, to 39.4 million bottles. Volumes and value in Europe in 2016 were down 1.2% and 1%, respectively.

The pattern of increased exports to the rest of the world (regions such as Africa and the Caribbean) also continued to rise in 2016 in terms of volume (+5.4 %) and value (+5.1%).

Growth in the US has also contributed to steadily rising VS quality volumes (+9.6%) and value (+13.0%), with VS now accounting for half of all Cognac exports.

Meanwhile, old quality Cognac exports have experienced a revival, with an 11.7% increase in volumes and value up 8.3%.

Despite challenging weather conditions (frost, hail and drought), production volumes remained satisfactory last year at 101.94hl per hectare (versus 126hl/ha for the previous harvest), BNIC said. This amounted to a yield of 10.37hl of pure alcohol/ha and a harvest distillation level that should produce 750,000hl of pure alcohol, BNIC said.

The annual Cognac harvest yield for 2016 is 11.02hl of pure alcohol per hectare.

db reported in June last year how severe hail had swept through parts of Cognac, along with Chablis and Beaujolais, on 27 and 28 May causing extensive damage to some vineyards.

However, BNIC said that the ‘climate reserve’ – established in 2008 to allows producers to hold back a reserve of pure alcohol in case of poor harvests – would help to mitigate the effects of any harvest shortfall among winegrowers who did not reach regulatory annual yields.