Menu
In the Magazine Sponsored story

A rare masterclass in vintages from the Almaviva winery left an audience in Hong Kong in no doubt of Chile’s ability to challenge anywhere in the world. Patrick Schmitt MW reports. 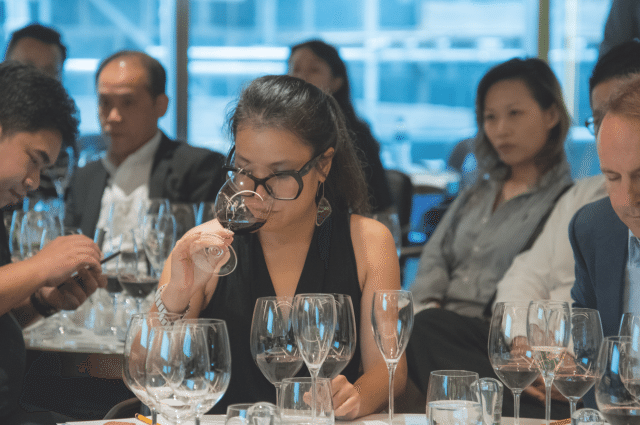 If one were in any doubt about Chile’s ability to craft fine age-worthy red wine then the Almaviva masterclass at Vinexpo Hong Kong would have changed your opinion forever. The wines, a library collection of seven vintages back to 1998, all in magnums, proved that Bordeaux grapes planted in the poor rocky soils of Chile’s Puente Alto can produce something that is powerful, structured and layered in its youth, but also elegant, complex and lingering with maturity. Importantly, the wines, whatever their vintage, were distinctive: Almaviva manages to deliver a style that is hard to replicate, one that stems from Chilean terroir, but also the winemaking traditions of Pauillac. The project was jointly established in 1996 by Baron Philippe de Rothschild of Château Mouton-Rothschild and Eduardo Guilisasti Tagle of Concha y Toro, Chile’s biggest wine producer.

Today, 20 years since the winery’s foundation, Almaviva has earned a reputation as one of the world’s great wines. But cementing such an image requires truly global exposure, and the Hong Kong event, called ‘The Almaviva Experience’, was designed to properly introduce the Asian market to the particularities of this great Chilean wine, as well as gauge people’s responses to it.

To lead the event, Almaviva invited Ch’ng Poh Tiong, wine judge, consultant and writer, as well as publisher of Asia’s The Wine Review. Ch’ng, enthusing about the opportunity ahead of the panelists and attendees, said at the start of the masterclass: “It is really very rare to sit down and go on a journey with a wine over seven vintages, one third the lifetime of this wine, and it means that we will become the most experienced Almaviva tasters.”

Ch’ng acknowledged that the history of Almaviva is relatively short in the world of wine, but said that this had not diminished its ambitions. Drawing a comparison he said, “America is barely 300 years old and it is such a dynamic country: sometimes it’s not the length of time but the purpose you put behind something that makes it great.”

Mouton-Rothschild and Concha y Toro “came together to produce a very special wine, having sensed that they had the fundamentals to make something great,” Ch’ng told the audience, “but let’s hold our judgment until we taste these wines.”

Turning his attention more broadly to Chile, Ch’ng said that the country was “a very special place for all scholars of wine… and in a sense it is more Bordeaux than Bordeaux.” That, he explained, was because “in the 1860s phylloxera decimated the vineyards of Europe – of course, Bordeaux wasn’t spared, but strangely enough, Chile is so isolated that phylloxera never spread there, and because of that, the original rootstocks of all Bordeaux are now found in Chile.

“It was as though Chile was locked in time… so the rootstocks for Cabernet Sauvignon, Merlot, Cabernet Franc, Petit Verdot and Carmenère are more Bordeaux than what you find in Bordeaux. It’s like Kew Gardens: a repository of the plants of the world.” 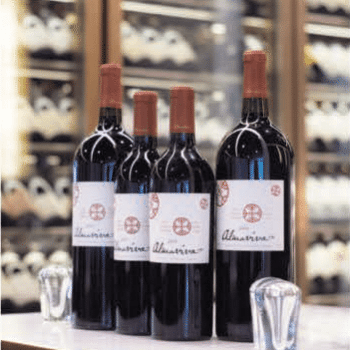 Noting in particular the inclusion of Carmenère in the Almaviva blend, a grape that was commonplace in Bordeaux before phylloxera, Ch’ng said: “These seven wines are going to be a revelation… these wines are like tasting nineteenth century great Bordeaux.”

Tasting began with the oldest wine in the line-up, Almaviva’s third release, the 1998 vintage. Of the panelists (listed in the boxout on page 50), Fongyee Walker, co-founder of China’s Dragon Phoenix Wine Consulting, was the first to comment, saying: “It is riper than a ‘98 Bordeaux would be on the left bank, but it has a savouriness and structure to it that shows an Old World pedigree. It really shows how the two worlds can come together and create something with great ageability.”

For Andres Ballesteros, Asia director at the Almaviva winery, this remark was significant, prompting him to add, “This is what we want to show, we want to highlight that Almaviva is a great wine of both worlds: a wine with the elegance and finesse of a Bordeaux Grand Cru in the great terroir of Chile.”

Katsuyuki Tanaka, Japan’s leading wine writer and taster, then commented: “The wine has serenity, it has peace, it is quiet and tranquil. This is a character I like to see in all great wines of the world. It is not forward fruitiness, but if you pay attention, the flow of taste goes backward, like the wine is pulling your palate into a dark forest – and this is the first Chilean wine I found with this characteristic.

“The character of an ungrafted vine is evident in this wine. It has verticality. Feel the flow of taste in your throat, it is like roots going deep; you feel a lot of energy in your stomach. Grafted wines, no matter how beautiful they are, don’t have this very deep taste, this downward verticality.”

Yang Lu, corporate wine director at Shangri-La Hotels, said: “I am a sommelier working on the floor, it is a very practical job, so we can’t get too philosophical, and for the general consumer who doesn’t have much wine knowledge, the strong tie with the Old World is important. The Mouton name definitely helps the image. And this wine is not a copy of Bordeaux, it expresses the terroir of Chile, while this 1998 vintage would be great for guests to show the ageability of New World wines.” 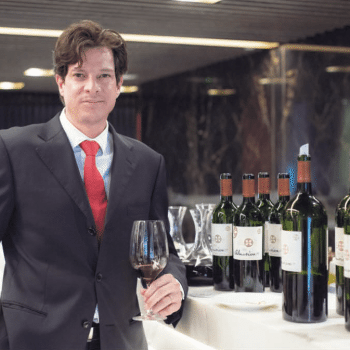 Picking up on this point, Andres Ballesteros said that Almaviva was proof that Chilean Cabernet-based blends can age brilliantly.

“This [Puente Alto] is one of the best terroirs in the world and we know how to produce fine and elegant wines: people says that Chile produces wines with low acidity and no ability to age wine but this 18-year-old wine clearly tells us that wines of Chile can evolve and age in the same way as the greatest wines in the world.”

Katsuyuki Tanaka then discussed the impact of Almaviva’s specific soils and climate on the wine. “The terroir of Puente Alto has a lot of gravels, but they are different to the gravels of Bordeaux.

“That’s because the original material of Puento Alto was volcanic rock, and that brings a more upward nose – for example, you can see a much more upfront nose in Soave grown on volcanic soils.

“Also, the soil is Chile is slightly alkaline because irrigation water has a lot of calcium… so you feel openness from the volcanic rock and a grippy kind of acidity, which is very present in almost all Chilean wine. One reason is diurnal temperature shift, but another reason is calcium content in the irrigation water. So that’s why this wine has the openness and roundness of left bank of Bordeaux with the tightness and fresh acidity of the limestone part of the Right Bank; openness and spice from volcanic gravelly soil and the elegance of limestone, even though it is not there. This kind of terroir is very rare, and it is complete.”

Once the 2003 vintage had been tasted, Nelson Chow, president of the Hong Kong sommelier association said that Chilean reds were associated with “power and alcohol” but “if you can show them a style like the Almaviva 2003, with Bordeaux style and a New World sense, a wine with round tannin, richness, and at same time elegance, then they will realise they are drinking a good quality wine.” 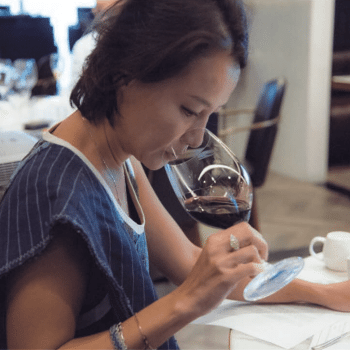 Yang Lu, corporate wine director at Shangri-La Hotels, spoke about the balanced character of Almaviva: “The 2006 is amazingly fresh and young, it has lot of intensity on the palate, and a consistency from the beginning to the finish, which is a sign of a great wine.

“Most people have the perception that New World wines are powerful and jammy, but this is very elegant and balanced with minerality and restraint – you can use this glass to wow your guests. And the last thing is the price.

> Almaviva was established in 1996 by Baron Philippe de Rothschild of Château Mouton-Rothschild and Concha y Toro. Their aim was to create the first Bordeaux Grand Cru Classé equivalent in Chile using grapes from the best Puente Alto vineyards.

> Puente Alto, located in the Maipo Valley, was recognized over 20 years ago as offering ideal conditions for growing the Cabernet Sauvignon grape. It is here that 85 hectares have been reserved exclusively for Almaviva. The characteristic features of Puente Alto include its stony soil, cold, rainy winters, and the hot days and cool nights of its summers.

It is top, top wine, the crème de la crème from Chile, but if you think of the cult wines of California, the first growths, or the Super Tuscans, not many can afford them. Almaviva offers so much value for the guests, which is a further tool for promoting it.”

“So people see that, and instantly they are interested in purchasing it, and for gifting, it works.

“For each category, and each country, the top of the top always has a market in China – and Almaviva is the best from Chile.”

In addition, for Yeung, Almaviva, which today produces between 15,000 and 17,000 cases of wine annually – similar to a First Growth – offers an “investment potential for the future.”

Looking back over the seven vintages that had been tasted, Ballesteros said: “Having gone through the process of tasting the different vintages, I can see that the 1998 and 2000 have a more Bordeaux character, which comes from our French team working hand in hand with our people in Chile, and from 2006 I can see Almaviva building its own character and style.

“It is not a Bordeaux and it is certainly not a fruity Chilean wine but something that seems to balance the best of both worlds.”

For Ch’ng, the different character of Almaviva depending on the vintage was a sign that this was truly a fine wine. “A great winemaker is very sensitive: like a sensitive parent, you can’t treat all your children same way, and you can’t treat every vintage the same way – if you did, you will not make sensitive wine but a recipe wine,” Ch’ng said.

Concluding he said, “The technical team from Mouton-Rothschild are involved in Almaviva, and that’s because they sense that there is something special here, something unique, and something that is worthy of ageing and translating into a great wine.”

Returning to his opening point, Ch’ng said that he hoped that after their tasting, the Hong Kong audience who had participated in the masterclass would now become ambassadors of Almaviva.

Judging by the applause from the attendees, that hope had already become a reality.