Haul of fake Scotch hints at wider world of counterfeits

Fake Scotch whisky worth close to £1 million has been removed from the market in what one broker has called “just the tip of the iceberg”. 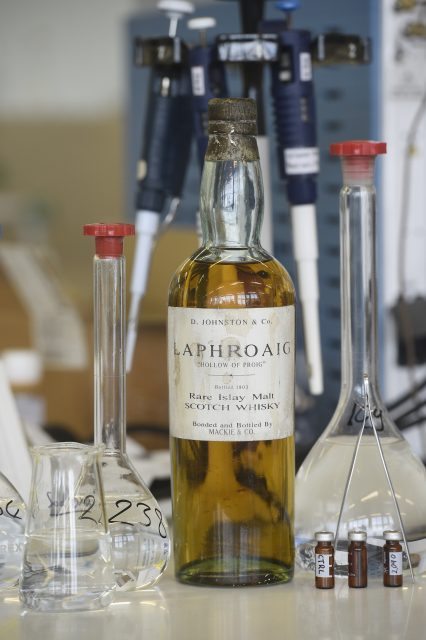 Rare Whisky 101, a whisky analyst, broking and investment company, has said it has found a haul of fake Scotch of very high quality that has been in the auction market for some time.

Rare Whisky 101’s founders, Andy Simpson and David Robertson, reportedly acquired the bottle of Laphroaig at an auction in 2015 (the Macallans were simply authenticated) and subjected it to a series of tests over six months; including examinations of its glass, cork and capsule and an analysis of its peat derived compounds and malt and grain compounds to prove its provenance.

A sample was even carbon dated at Oxford University’s Radiocarbon Accelerator Unit. Although this method generally cannot return absolutely precise findings, the results suggested a 75% chance that the liquid was created between 2007 and 2009.

Coupled with results from other tests which showed it was a blended Scotch not a single malt, the conclusion, very clearly, was that it was a modern fake.

Simpson said: “This experiment was a first for us, a chance to try and prove the provenance of a bottle of single malt Scotch which purported to be among the oldest surviving bottles in the world. We had our suspicions from the start, but the forensic testing has enabled us to examine each and every component. Despite a very convincing aesthetic, our bottle, which had been circulating at auctions for a good few years, was most certainly a fake and quite possibly the most expensive young blended scotch in the world! This result, whilst personally disappointing, goes to show that we’re really dealing with some top class imitations.”

The whisky was supposedly bottled by Mackies, which is clearly a ‘unicorn’ bottling for collectors of Scotch – and therefore one of the more counterfeited liquids.

A well-known Dutch collector of Laphroaig, Marcel van Gils, told Scotchwhisky.com in an interview this February that while his “Holy Grail” of bottlings would be a genuine Mackies: “I think the 1903 Mackies you see today are ‘inventions’.”

With the secondary market for whisky in the UK alone forecast to trade around 55,000 bottles of whisky worth around £12 million by the end of this year, both Davidson and Simpson stated that as whisky of all kinds continues to grow as an investment category so the number and sophistication of counterfeits is growing – and is likely already much larger than many estimates.

Robertson said: “The risk for the market is that we’re seeing an increasing number of old, rare archive or antique bottles coming to market, and it’s very difficult for the untrained eye to verify authenticity. Our Laphroaig 1903 would seem to suggest that there are now some very good quality fakes which have been recently created to fool unsuspecting connoisseurs, collectors and investors into parting with serious money. Indeed, the forgeries that we’ve uncovered could be just the tip of the iceberg. So our message to whisky fans is buyers beware! Don’t take the chance to acquire rare, old, antique looking whisky unless you can be 100% sure of its provenance.”

Simpson stressed to the drinks business that the problem is not confined to Scotch whisky either. He explained how he had come across some counterfeit examples of the much admired and collected Japanese whisky Hanyu earlier this year as well.

Simpson’s statement that the Laphroaig had been “circulating at auctions for a good few years” has parallels with a claim made recently by fine wine authenticator Maureen Downey, who said that millions of dollars worth of fine wine faked by Rudy Kurniawan was still doing the rounds at auction.