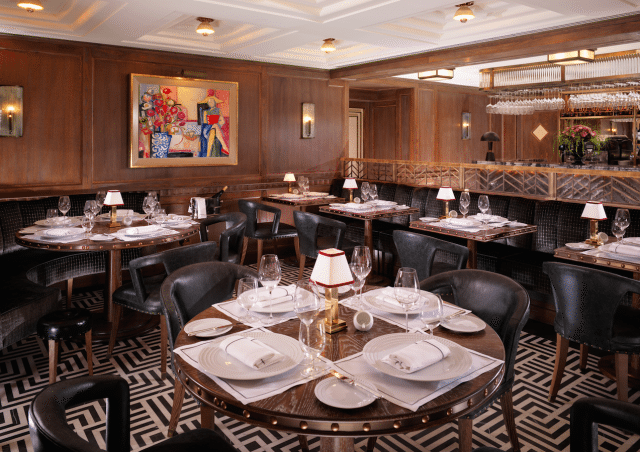 The concept: An ormer, for those who don’t know, is a ritual mating dance of the lesser white-toothed shrew… It isn’t really – though, like the lesser white-toothed shrew, it is Jerseyan. It’s actually the name of the prehistoric-looking mollusc, and culinary delicacy, known in other parts of the English-speaking world as abalone… and of Michelin-starred Shaun Rankin’s restaurant in Jersey, of course, which has just spawned a London version in the fine dining nexus of Mayfair.

This is the shiny new dining space within the shiny refurbished Flemings Hotel, founded in 1851, done up with all the bells and all the whistles in 2016 at a cost of about £15m. The new restaurant even has windows now (impressive to those who remember the windowless Flemings Grill). Shaun Rankin brings his impeccable seafood supplies, his salty fingers and his commitment to smartly presented, seasonal British produce to a demanding, powerfully unimpressable West End audience.

The décor: Definitely has that new feel, and sheen, about it. An overall ‘art deco library’ aesthetic is punctuated by shimmering velvet banquettes, flawless wood-panelled walls, smart leather-upholstered chairs (very reminiscent of those at Ormer Jersey), and a parquet floor of such glitch-inducing geometry that it’s probably best if you don’t look at it. You’ll find smart crockery and silverware but no white tablecloths. If this latter aspect is meant to dial down the sense of formality, it doesn’t especially. Neither does the tinny lift music that was playing for the first hour or so when I was there – that felt like someone had accidentally left the radio on.

The food: We chose from the à la carte menu but there’s also a tasting menu comprising the bulk of what’s on offer on the former for £75. Ther are also vegetarian and vegan menus available on request. Starters of foie gras with grape jelly, Granny Smith apple and hazelnut in a light, silky Beaufort cheese velouté; and scallops with confit chicken wings, creamed corn and basil were pleasingly indulgent, well-balanced dishes paired well with Nyetimber demi-sec and Condrieu, respectively. A main of perfectly cooked and seasoned turbot with pine nut crust, partially dehydrated cauliflower, cockles, samphire and sea fingers (£32) was very good; the duck fillet, caramelised endive with maple syrup, turnip, duck hearts and pistachio cream (£30) a touch too sweet with the maple syrup caramel and already-sweetish duck sauce. A pudding of Rankin’s signature treacle tart with clotted cream ice cream and raspberries had a base that was hard to cut through but, taste-wise, was hard to argue with. (Don’t argue with Shaun Rankin’s treacle tart. Just don’t.)

Signature dish: The rich turbot with the salty sea tang of cockles and sea vegetables is classic Shaun Rankin and, as suggested by head sommelier Andreas Rosendal, pairs very well with the soft, fruity, low-tannin Pinot Noir/Dunkelfelder red from Denbies.

The drinks: Rosendal has previously worked as head somm at Michelin-starred Brasserie Chavot and as assistant head somm at the two-star Restaurant Sat Bains in Nottingham. He also looked after the largest list in the UK for a time – at The Greenhouse.

He’s working with considerably fewer than 3,600 bins at Ormer Mayfair – just 150 for the moment, but with the capacity to grow to around 300. For Mayfair, this makes the list very approachable, as do the prices, which determine the order of the wines – so wines in the £20s, then the £30s, then £40 and upwards, then the ‘Library’ wines. If you do have money to burn, the Library section offers Guigal’s 1990 La Landonne for £1,240.

Pride of place is given to English sparkling, with an extensive range of Nyetimber and Ridgeview (as well as Devaux Champagne) available by the bottle – Nyetimber’s 2009 Classic Cuvée is ageing very well, while you can also sample wine from the Sussex estate’s very first vintage – the 1992 blanc de blancs. Gusbourne and the aforementioned Denbies also get a look in.

There’s also a full-page tea menu to enjoy with your petit fours.

Who to know: Restaurant manager Agnieszka Josko can’t be missed by virtue of the fact that she’s about 9ft tall (she jokes that Rankin had to get the builders to adjust the ceiling so she could stand up straight). She’s been working with Rankin since Ormer Jersey opened nine years ago and will be able to tell you everything you need to know about the menu, the restaurant and its ways of working.

Don’t leave without: Scoping out the refurbed cocktail bar, Manetta’s, with its Agatha Christie-themed drinks menu and swarthy, glammed-up décor.