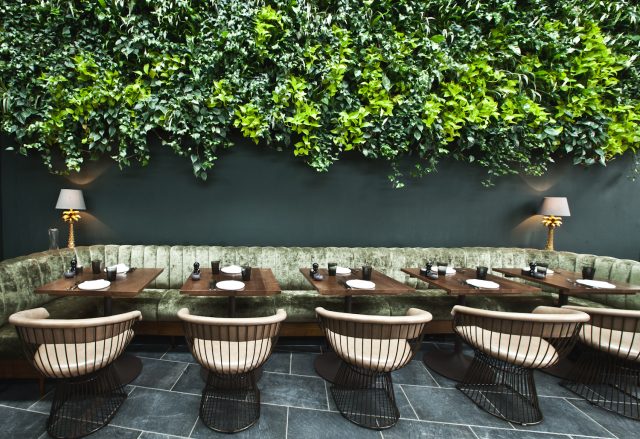 The concept: Tattooed provocateur Tom Sellers burst onto the London restaurant scene three years ago with his instant hit debut venture Story in London Bridge, which won him a Michelin star aged 26. Serving playful dishes like beef dripping candles and three bears’ porridge, Sellers sought inspiration from childhood memories and the imprint they made on his impressionable palate.

Three years on he opened his second London venture, Ours on Brompton Road, where he serves as ‘culinary director’. While Story is rooted in truth, Ours feels a little contrived, from the name to the catch-all modern European menu. Without Sellers there to man the stoves, it seems like a rudderless ship lost at sea.

The décor: Housed in what used to be The Collection, the restaurant is accessed via a walled catwalk with an illuminated glass floor, which will no doubt delight the fashionistas and Made in Chelsea stars who meet there for lunch.

The outside is brought into the cavernous space via a giant tree in the centre festooned with fairy lights and a plethora of giant house plants.

A vaulted white ceiling and open brickwork add to the conservatory feel, recalling Kew Gardens, Sky Garden in the City and Philippe Starck’s The Hudson hotel in New York. Olive green banquettes, an open kitchen and a funk soundtrack complete the look.

The starters, bar bites, sides and sharing plates are more exciting and better executed than the mains. A decadent bowl of chunky triple cooked chips slathered in foie gras and shaved pecorino is worth the detour alone, though my main of truffle tagliatelle left me deflated. Served tepid, the pasta could have been more al dente and the truffle more generously administered.

Signature dishes: There were moments of brilliance on the menu, such as a playful shrimp and yuzu toastie rammed with juicy, creamy shrimp laced with the Japanese citrus fruit, which proved that the kitchen is at its best when it has a bit of fun with the dishes.

Also exemplary were silky scallops gremolata served in their shell that were so perfectly cooked they left me craving for more. Winning on the theatre front were the crudités, served in a mossy box billowing with dry ice.

The drinks: Cocktails are a must at Ours. While classics like the Aviation and Martini are done well, venture to the signature sips for more fun. Our firm favourite was the Childhood Memories, featuring Appleton Estate rum, Mandarine Napoleon, lime, gingerbread syrup and bitters.

Served in a copper cup with a smiling gingerbread man, it charmed with nostalgic notes of orange, ginger and biscuit in an adult twist on infantile flavours.

Who to know: You’ll spot floppy-haired Latvian head sommelier Alvis Nemiro swaggering around the room insouciantly in a beautifully cut blazer and retro specs. He’s a font of wine knowledge and the star of the show here, on hand to talk you through the wine list with interesting nuggets of info on each of the estates on pour.

On his recommendation we enjoyed a zippy Grüner Veltliner from Wagram producer Josef Ehmoser, which paired perfectly with the scallops, and a juicy glass of 2010 Château de Moulin-à-Vent Beaujolais that harmonised with the earthy notes in the tepid truffle tagliatelle.

Don’t leave without: Scoping out the jungle-like loos plastered in leafy wallpaper that could have come from the hand of French post-Impressionist primitive painter Henri Rousseau.

Last word: Ours has good intentions, and is no doubt a regular haunt for well-heeled Sloanes, but my experience was hit and miss. The venue is easy on the eye, the cocktails are fun and the bar snacks are brilliant, but the mains were lackluster and the service often felt rushed. Sellers should spend more time at the venue to help give it a distinct identity. At the moment it seems a little lost.