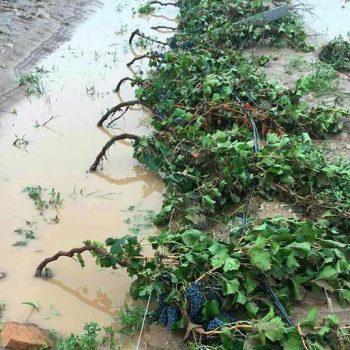 August 22 early morning, a sudden rainstorm unleashing over 200mm rainfall mercilessly hit Ningxia’s East Helan Mountain Area, causing complete destruction to several vineyards and severe damage to a number of wineries. The worst-hit wineries are those situated in the Lower Jinshan Experimental Zone (金山试验区), including Deda(德大), Zhuode (卓德) and Hua Er Hong (花儿红). According to the initial assessment of damages as reported to the local authority, the latter winery estimated its overnight loss at over 4 million RMB and it would take multiple years of hard work to recover.

Head of Ningxia’s Lei Ren Shou (类人首) Winery, Feng Qing, also expressed his deep sorrow, “I went to check the vineyards just a few days ago and the average yield was estimated to be below 200kg/mu (1 mu is roughly 0.165 acre). The veraison is almost over and we are about to harvest next month, but now the tragedy happened.”

Ningxia’s East Helan Mountain Area sits in China’s north-west inland plateau. With a typical dry continental climate, its annual rainfall is normally only 150-240mm. Therefore, flood drainage is generally insufficient in the region, with shallow and narrow waterways. In the situation of a natural disaster like this, both local government and wineries, despite their best effort in damage control, lack the necessary experience and facilities to minimise the loss.

Fortunately, the soil of the region is mainly sandy gravel, which provides good drainage and helps affected areas drain away excess water. As of now, the affected vineyard area is estimated at under 2000 mu (about 330 acre). Most wineries admitted that although they were severely affected, the damage was still under control. Hopefully, this will not cause devastating damage to this year’s overall yield.