A futuristic winery and cellar designed by renowned French architect Phillippe Starck to look like a “raw metal blade plunged in the terroir” has officially opened at Château les Carmes Haut-Brion in Bordeaux. 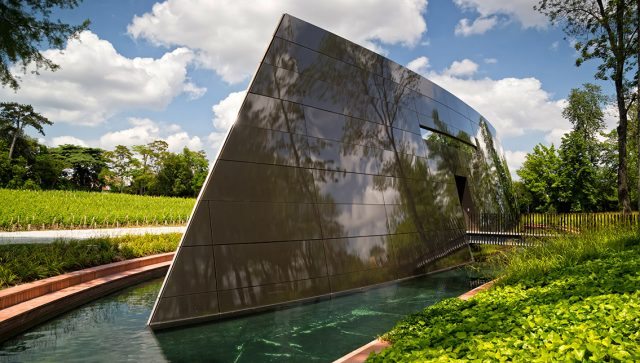 The 2,000 square metre cellar, designed by Starck and Luc Arsène-Henry, is clad in stainless steel panels and is partly submerged in a man made lake. Spread across three floors, it contains a vat house, a barrel cellar, a series of reception rooms and a large roof terrace.

The concept behind the design was for it to appear as if a raw metal blade had been “plunged in the terroir.”

“As a blade fallen from the sky in a superb copse of tall trees on either side, flanked by vine-covered slopes, the new cellar distributes the four levels of various wine-making and reception areas,” said Arsène-Henry. “Free from any architectural gesture, it symbolises the qualities of the wine that is made there: finesse and elegance.”

Of the cellar’s three storeys, one is submerged underwater with the remaining two above ground. The lower level contains the barrel room which has the capacity to store 300 barrels, with its subterranean location helping to maintain a constant temperature. The level above contains two rows of wine vats, including wood, steel and concrete, with a tasting room and panoramic roof terrace on the top floor.

Work on the cellar began in 2014 and completed in time for the 2015 harvest, with the cellar officially opened at a ceremony held at the Pessac-Léognan wine estate this week.

“[The wine’s] home had to be evocative, a minimum, an institution, a reflection,” added Starck. “The wonder of Château les Carmes Haut-Brion deserved this consistency, I hope we did not prove unworthy.”

The 10-hectare Château les Carmes Haut-Brion estate in the Pessac Léognan region was bought by businessman Patrice Pichet in 2010.

Other high profile estates to enlist the help of top architects on winery projects include Marqués de Riscal in Rioja, who collaborate with American architect Frank Gehry on a futuristic winery in 2006, as did Santiago Calatrava at neighbouring Ysios in 2001.

In 2010 Lord Foster designed the winery for Bodegas Portia in Ribera del Duero for the Faustino group, and more recently at Chateaux Margaux in Bordeaux. In 2006 Dame Zaha Hadid completed her project for the tasting room pavilion beside Lopez de Heredia in Rioja.

Click here for our round-up of top 10 architectural wonders of the wine world. 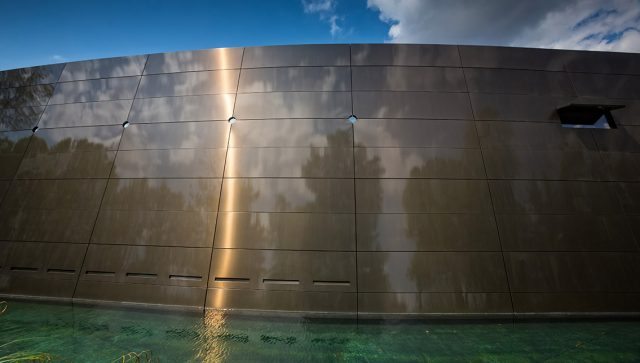