You don’t have to look far to find stunning examples of architectural prowess in the world of wine, but this collection of avant-garde, boundary-breaking wineries are perhaps among the most impressive. 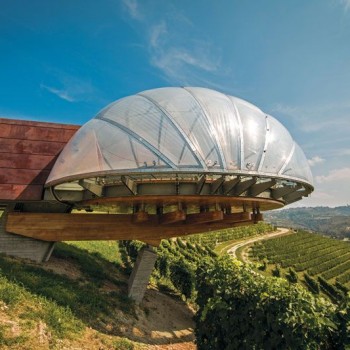 While the quality of the wine is arguably more important than the visual aesthetic of the winery in which it was made, there is no doubt that a striking building can help boost a winery’s profile. Not to mention the environmental and economic benefits that can come with a bespoke, state-of the art winery.

Scroll through for a look at some of the most outlandish, avant-garde wineries in the world… 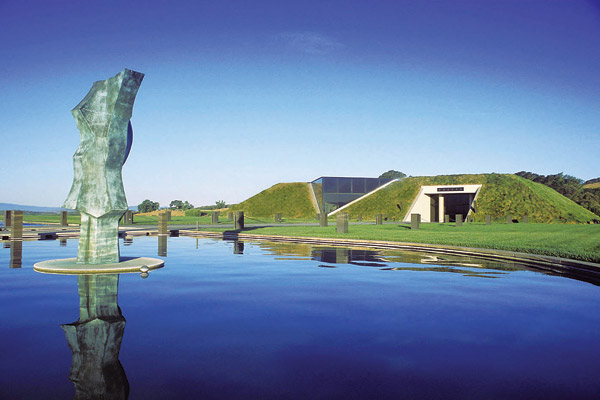 Designed by Barcelona architect Domingo Triay and built in the early 1990’s, Artesa’s avant-garde winery is built directly into a hillside in Carneros near to the town of Napa. Built with the intention of blending seamlessly into its surrounding landscape, the winery is covered with a protective layer of native grasses, with subterranean cellars deep below. Its winemaking operation is overseen by director of winemaking Ana Diogo Draper – a Portuguese native who moved to California in 2005. 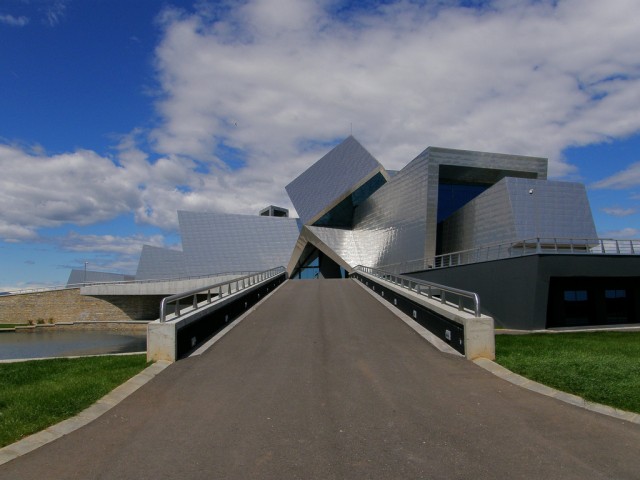 Located in Spain’s Somontano DO in the province of Huesca, in the north east region of Aragon, Bodegas Irius is one of Spain’s most modern and innovative wineries opening in 2008. Much of the winery is built into the ground hiding much of its 30,000 square metres underneath the vineyards that surround it. Designed by J. Mariano Pascual, the building is supposed to resemble a butterfly and cost €90 million. 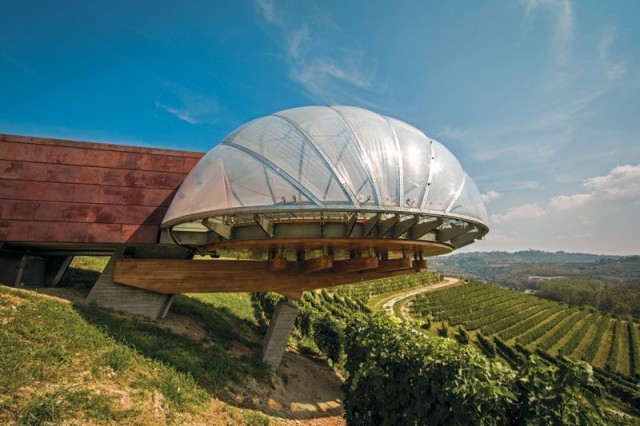 This former 19th century farmstead was acquired by the Ceretto family in 1987 and transformed into its winemaking headquarters, described by the family as its “nerve centre”. The winery’s highlight is undoubtedly its futuristic, spaceship-like observation deck which juts out over the vines affording visitors panoramic views of the estate. Known as the Acino, the Italian word for a single grape berry, it overlooks the vineyards of the Barolo hills. 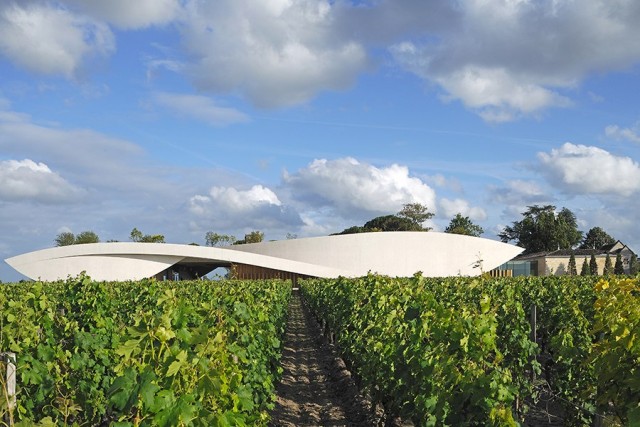 In 2006 the owners of St Emilion’s Château Cheval Blanc, Bernard Arnault and Baron Albert Frère, asked French architect Christian de Portzamparc to design a new facility to improve its wine production. Drawing inspiration from the concrete fermentation vats used by the château, Portzamparc created a concrete structure topped with a white concrete canopy, which appears to float weightlessly atop the vines. The barrel cellar below is described as “like a crypt”, surrounded by perforated brick walls to allow natural ventilation. 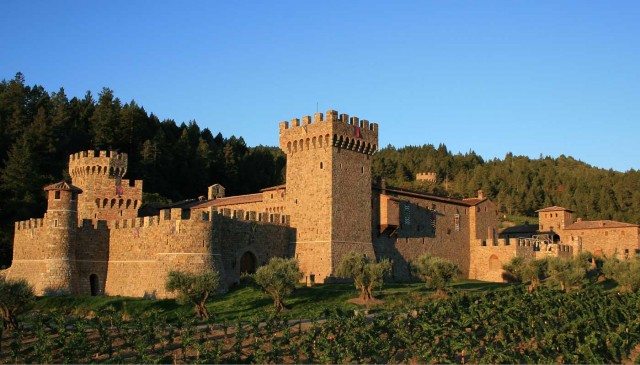 Castello di Amorosa is the result of one man’s dream to build an authentic medieval Italian Tuscan castle and winery in America. Dario Sattui, a 4th-generation Italian winemaker and entrepreneur, began building Castello di Amorosa in 1994, finally opening it for business in 2007. Across its 121,000 square feeet are 107 rooms, 90 of which are devoted to winemaking and storage, and a Great Hall with two-story replica Tuscan frescoes painted by Italian artists and a 500-year old fireplace. Built from 8,000 tons of hand-chiseled stones, the building is set over eight levels and features a drawbridge, dungeon and even torture chamber among numerous cellars. It remains the only building of its kind in North America. 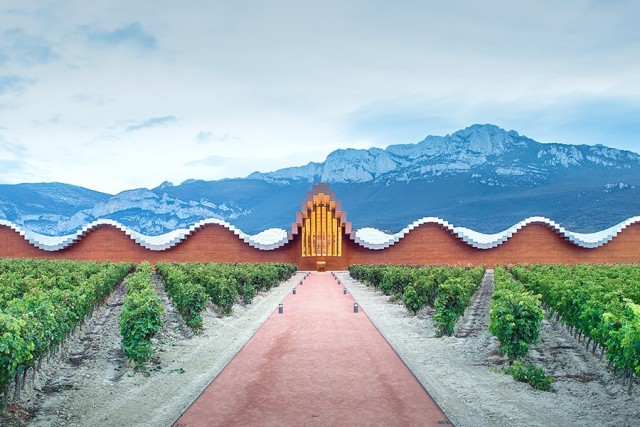 Designed by architect Santiago Calatrava in 2001, the Ysios Winery in Rioja is known for its pixelated, undulating roof set against the backdrop of the Sierra de Cantabria mountains of Spain. It is named after two Egyptian gods; Isis and Osiris. It is owned by Domecq Bodegas, who in 2013 sued Calatrava over repeated leaks in the roof of the winery, claiming it had “seriously deteriorated” in the 12 years since it opened with temperature changes causing fixtures to tear and aluminium parts coming loose in strong winds. 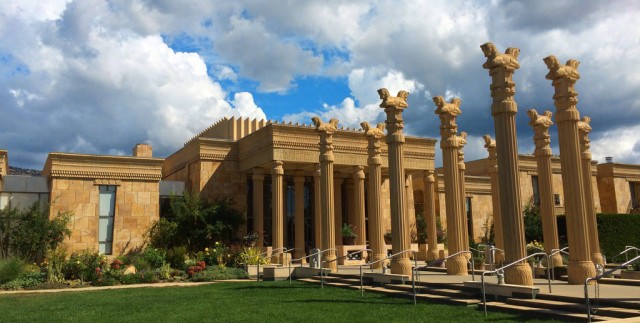 Darioush winery in Napa was built to resemble a Persian palace, reflecting the heritage of its owners Darioush and Shahpar Khaledi. It was founded in 1997 by Darioush, who grew up in Shiraz, formerly one of Iran’s prominent wine-growing regions. Designed by architects Ardeshir and Roshan Nozari, the winery took five years to build and pays homage to Persepolis – the ceremonial capital of the Achaemenid Empire (550–330 BC), located 40 miles from modern day Shiraz in the Fars Province of Iran. Set over 120 acres in the Southern Napa Valley, the estate’s vineyards cover parts of Mount Veeder and Oak Knoll AVAs.

This futuristic, pink-hued titanium hotel was designed by world-renowned architect Frank Gehry. It opened in September 2006 in the middle of the Vinos de los Herederos de Marqués de Riscal’s vineyard in the Rioja Alavesa. The expansive vineyard dates back to 1850s, making its the oldest winery in the region. Along with the winery, the complex is also home to a Michelin-starred restaurant and spa.

Mission Hill Winery is a Canadian wine grower and producer based in the Okanagan Valley wine region of British Columbia. It was first established in 1966 by a group of businessmen. In 1996 Olson Kundig Architects were commissioned to rebuild the winery, completing the project in 2002 at a cost of CA$35 million. Its centrepiece is a 12-storey, 85 foot high bell tower featuring four bells cast by Fonderie Paccard in Annecy, France. At the same time the winery began purchasing its own vineyards, and now owns 900 acres in the southern Okanagan Valley, Naramata and Mount Boucherie areas of British Columbia. 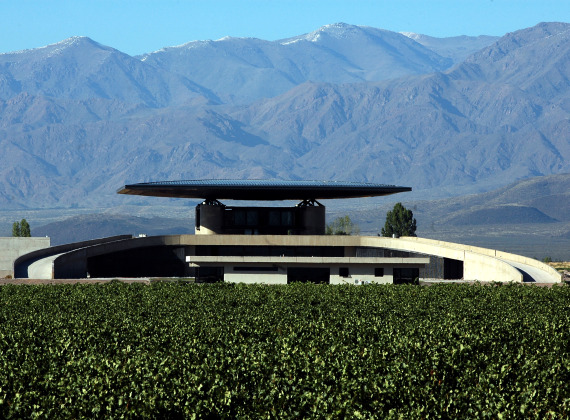 Standing 1,200 meters above sea level, the Ortega Gil Fournier family, from Burgos in Spain, bought the land on which the O Fournier winery stands in 2000, building a winery with the intention of producing fine wines. It is located within 263 hectares in the department of San Carlos, 130km from the city of Mendoza. Harvested grapes are brought up to the winery via ramps to an elevated reception area where they are deposited into four holes in the floor that lead to its underground barrel room. Its most striking feature however is its giant black roof, which not only makes it stand out, but provides shade and temperature control.