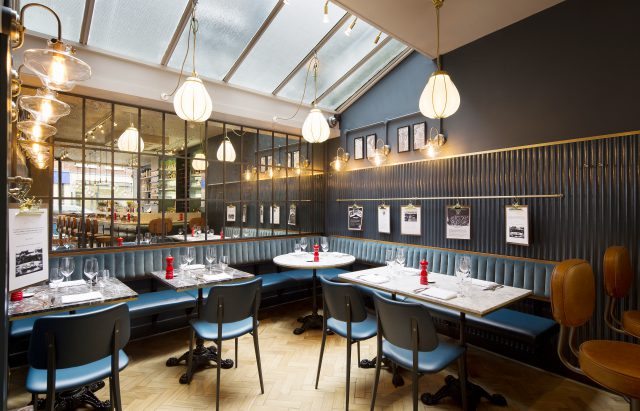 The Concept: Having won a Michelin star at his debut venture Texture in Marylebone with business partner and head chef Agnar Sverrisson, and carved a successful niche with his ‘wine workshop and kitchen’ concept 28°-50° in Mayfair, Marylebone and the City, restless master sommelier Xavier Rousset has struck out with his first solo venture, casual bistro Blandford Comptoir, named after the buzzy Marylebone street it resides on.

The décor: Space has been cleverly made the most of in the tiny 40-cover venue. You can either keep it casual up at the lemon and lavender lined bar on tan leather stools, or slide into one of the turquoise banquettes for a slightly more formal experience. Mirrors on the far wall help give the impression of space, while light fixtures are low and French in feel.

The majority of the dishes on the menu are available in both starter and main course format and are priced accordingly – a clever concept I hope more restaurants in the capital adopt.

Signature dishes: The ruby red Sicilian prawns are unmisssable and were perhaps inspired by a similar dish on offer at the now defunct Rex & Mariano in Soho. The courgette flower stuffed with goat’s curd is equally divine, as is a rich, creamy side of polenta and Parmesan.

The wines: As you’d expect from a master sommelier, wine plays a starring role rather than a cameo at Blandford Comptoir. The 250-bin list features over 50 Champagnes, a ‘celebrity guest list’ compiled by Gerard Basset OBE and an interesting by the glass and carafe selection featuring the likes of Brokenwood Hunter Valley Semillon and Bassona Dei Vino Nobile di Montepulciano.

France and Italy are strongly represented on the list, which is spilt down the middle with white on the left and red on the right in six price brackets from £23-60. For die hard oenophiles, the ‘Older & Wiser’ list at the end might appeal, where Tondonia ’98 costs £66, Château Cantemerle 2010 goes for £69 and Penfolds Grange 1997 is listed at £342.

Who to know: Californian head sommelier Devon Pryor is worth seeking out – she’s always got a daring pairing up her sleeve and will expand your wine horizons irrevocably.

Don’t leave without: Indulging in the lemon tart with a glass of Guiraud 2002.