Soave and Colli Euganei in pictures 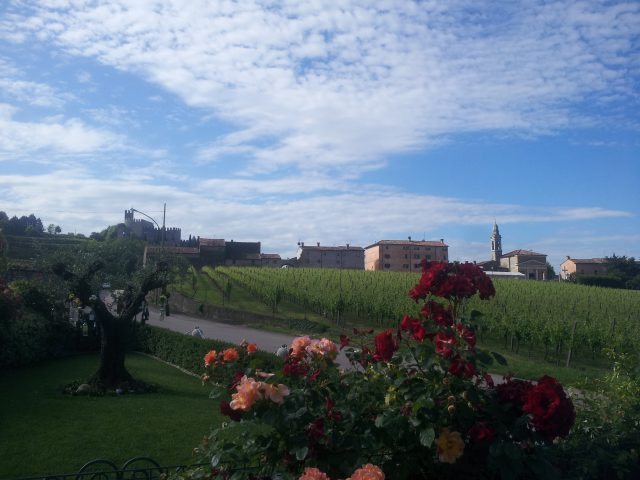 The four-day trip began in Soave with a chance to sample the region’s 2015 vintage wines as well as sampling a collection of the world’s best volcanic wines at the International Volcanic Wines Forum.

In the top-left of this picture, overlooking rows of the region’s native Garganega vines, is the Castello di Soave. 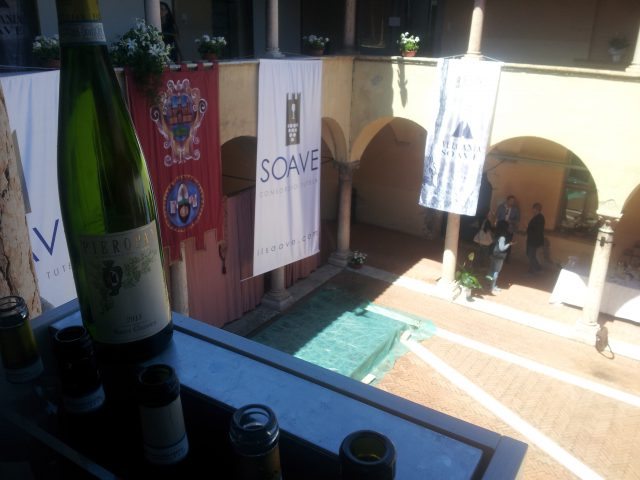 The Soave Preview took place in the august surroundings of the Chiostro del Palazzo Vescovile (the Cloister of the Bishop’s Palace) in Monteforte d’Alpone. 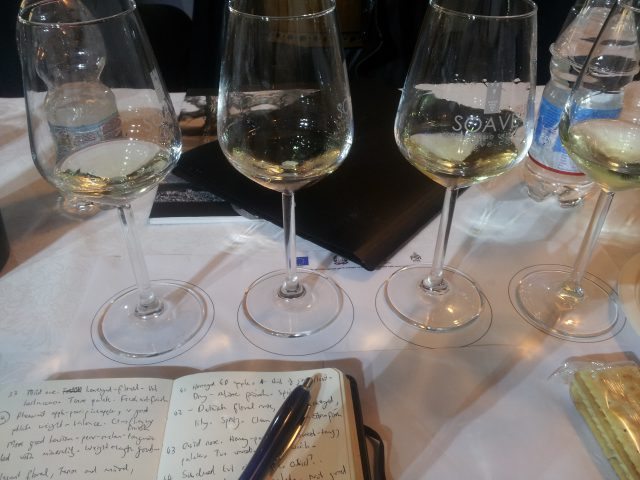 Guests were able to get to grips with what the 2015 had to offer in Soave through a marathon blind tasting of 61 wines. db‘s Darren Smith, seated next to Italian wine expert Kerin O’Keefe for support and to compare notes, took up the challenge with gusto. 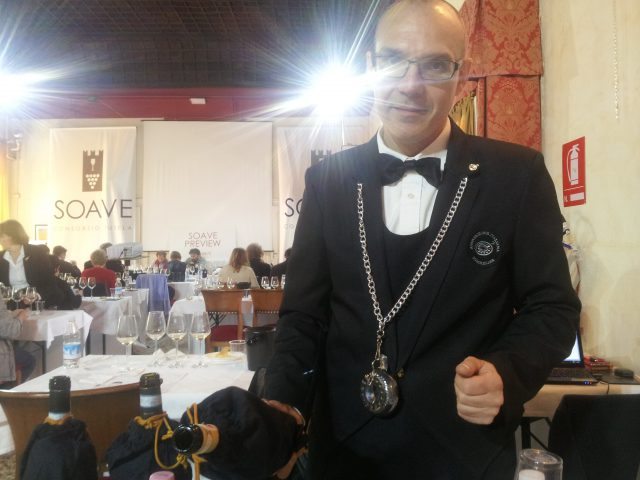 Delirium aside, the tasting was hugely informative, revealing a broad range of styles, running the gamut of pear (conference, stewed and drop) apple (green and red), citrus, peach, apricot, pineapple, herbs, almonds, coconut, elderflower and lily (Roman statesman and writer Cassiodorus is credited with having said that Soave wine is “so white and pure it seems born from lilies”).

What was instantly clear was the jump in quality from standard Soave to Soave Classico level, with the Classico wines showing greater focus, tension and minerality.

The blind tasting also confirmed the comments made by the consorzio regarding the 2015 vintage: namely that it was a relatively hot and extremely dry vintage in which fruit was to the fore (less floral than 2014 or 2013), and acidity lower than the norm. The best examples, however, showed a good balance of acidic, sweet and savoury/mineral components. 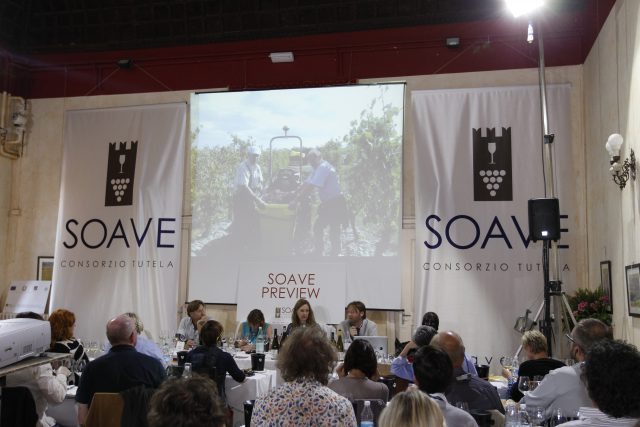 Created eight years ago by the Consorzio del Soave, the volcanic wine forum has helped Soave to define itself as a wine region and to gain something of a marketing edge amid the growing international interest in wines from grapes grown on volcanic soils.

Indeed, Nisbet Huseby’s presence at the forum was thanks to a prize-winning essay she had written in which she emphasised the importance of exploiting the cachet of volcanic wines to market Soave wines more effectively.

The forum followed a volcanic wines seminar held at the Institute of Masters of Wine last year, which was the basis of a db Top 10 volcanic wines feature. Oddly, there were no reds – though they really were not missed. 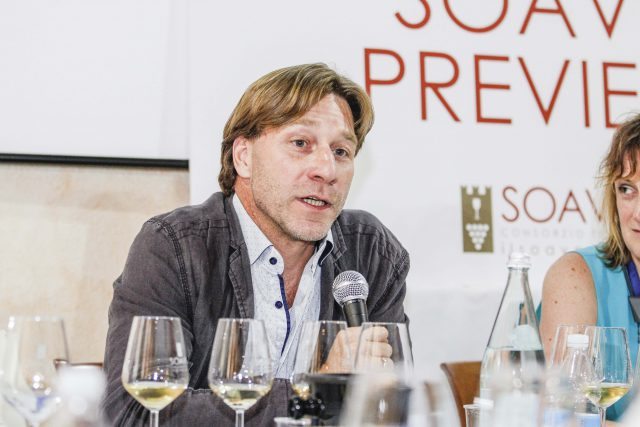 He didn’t just say this though. He followed by making the distinction that there are volcanic wines – plural.

Attempts to scientifically define them, he said, would always short.

“It’s impossible to scientifically define because the variables are staggering,” he explained.

“You think about different grape varieties and cultural techniques and climates – that’s one massive important thing – but even within one volcanic terroir the soil chemistry varies, the aspect , the age of the vines, the rootstock, the position on the hill, the water holding capacity from this parcel versus that…

“Once you start to add all these things up from a scientific perspective you can’t conclusively say ‘High pH in the soil equals x in the wine’ – you can’t do that. But we can taste it. We’re much more sensitive than the scientists, or we are much more able to synthesise information than a gas chromatograph ever could.

“So we’re left in limbo. We’re struggling with this notion of minerality – and I embrace it. It’s that extra dimension that some wines have and other wines don’t have.

“Why is that? We can speculate, we can even postulate, but we can never verify it scientifically. My feeling is why be so reductionist about it all?” 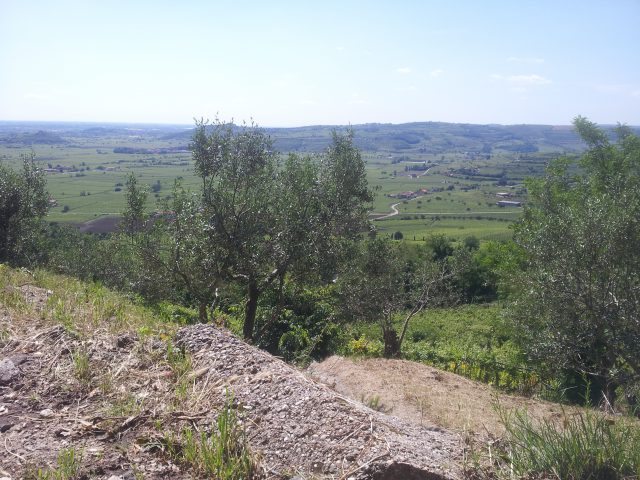 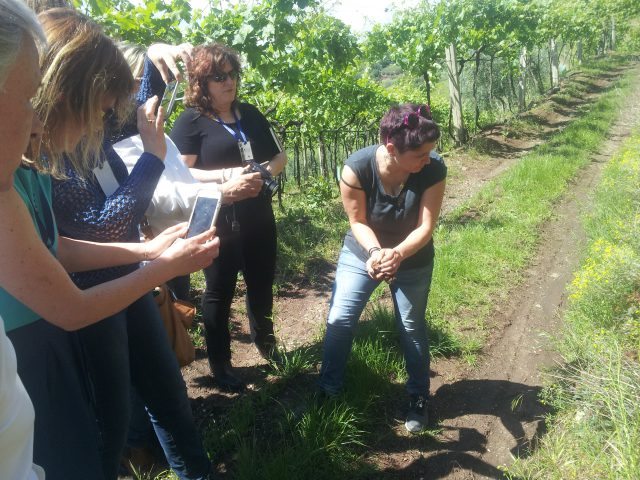 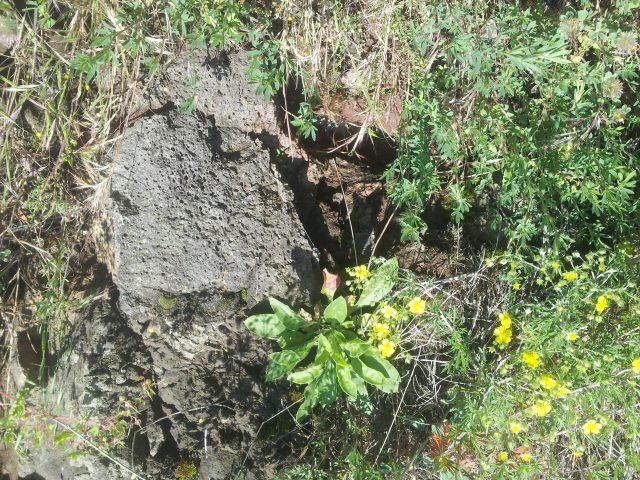 More mineral-rich basaltic rock on Monte Foscarino, where Monte Tondo makes its Foscarin Slavinus Soave Classico Superiore DOCG wine. Of the 75 or so producers in Soave, only 10 are Superiore. 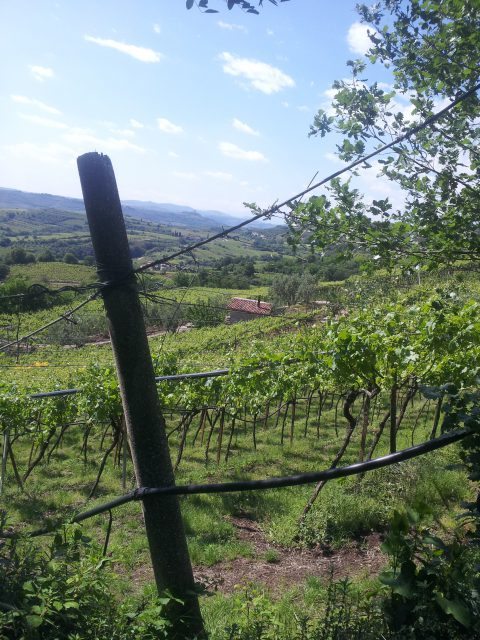 Young Garganega vines growing on the volcanic Monte Foscarino, one of 51 crus in the Soave Classico region. 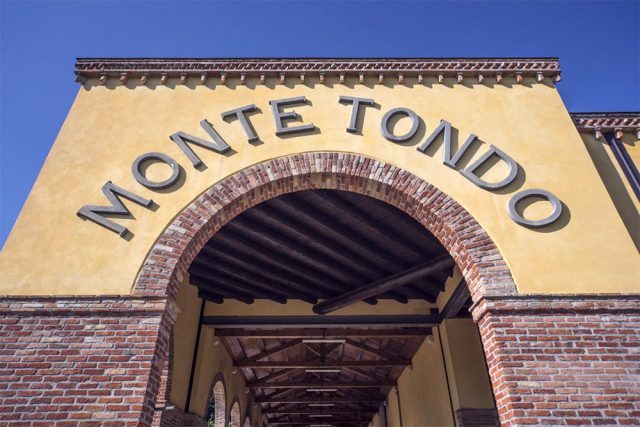 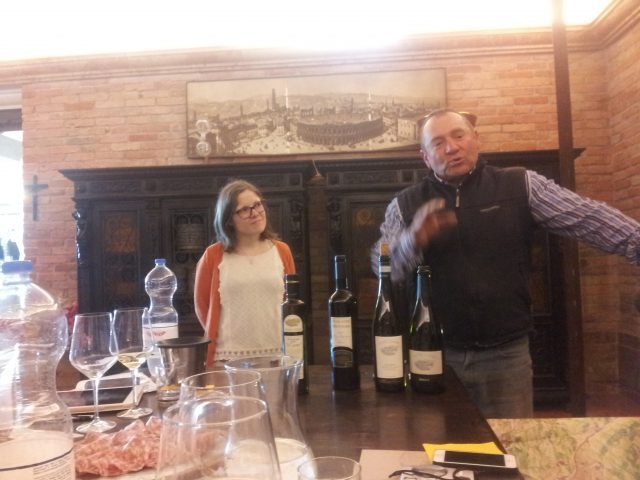 Back at the ranch, or la Cantina Monte Tondo, properly called, winemaker Gino and his daughter Marta took journalists through the range of Monte Tondo wines, which as well as Soave Classico included a delicious Recioto Spumante (sweet sparkling, made from Moscato Giallo, or Yellow Muscat) and an unctuous Recioto dessert wine. 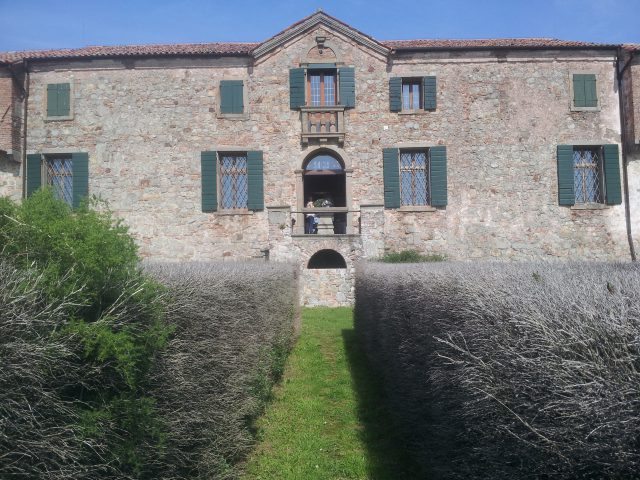 As if the pleasures of Soave were not enough, there followed a trip to the majestic Colli Euganei – the Euganean Hills – a formally recognised regional park, inspiration of poets from Petrarch to Percy Shelley, site of hilltop monasteries and luxurious villas (like Villa Beatrice D’Este on Monte Gemola, pictured) and many volcanic vineyards. 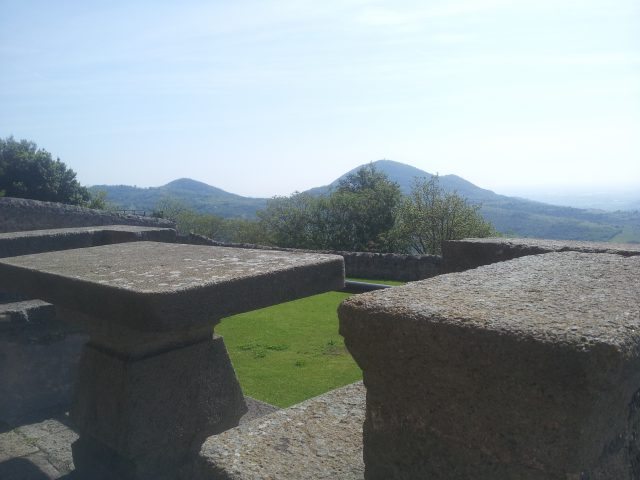 The rear terrace of Villa Beatrice D’ Este, featuring a table and chairs hewn from the local volcanic rock, commanded quite godly views of the surrounding Venetian-Padovan plain.

The hills that rise up so dramatically from the plain are described as volcanic but, as in Soave, they are not volcanoes in the same sense as Etna or Stromboli, for example. They have never erupted or produced lava flows; rather they are the product of non-eruptive submarine volcanic activity – the region was part of a shallow sea about 150 million, the bed of which rose up in places due creating the morphology we see here. Beneath layers of limestone, and in places jutting out of it dramatically, are huge strata of trachyte, rhyolite, latite, and basaltic rock.

The trachyte rocks of Colli Euganei were quarried for use in the construction of the excellent architecture and piazza paving of nearby Padua and Venice. 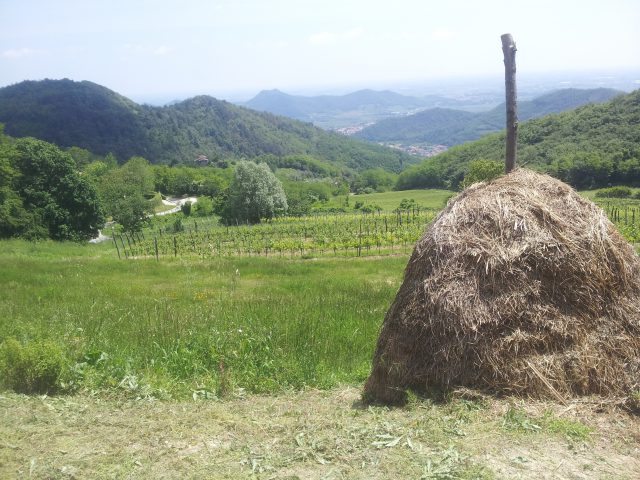 The Colli Euganei also have their own wine DOC, and for volcanic wine enthusiasts represent a place of discovery. Not all the wines of this region impress – the regulations on yields are fairly lax. However, those producers who work on low-yield principles are well worth seeking out.

The vineyard pictured, planted with Manzoni vines (it’s a cross between Riesling and Pinot Blanc) belongs to Cà Lustra, which produced the most exciting wines of the entire trip. 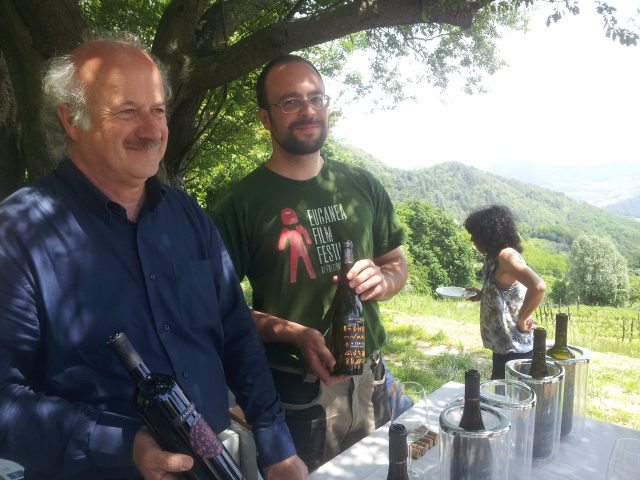 Cà Lustra is owned by the  Zanovello family, which also owns vineyards in Sicily. Franco Zanovello (pictured left), has handed over winemaking duties to his son, Marco (right), in recent years. Marco has implemented organic, loosely biodynamic viticultural practices, with minimal intervention in the vineyard.

Marco is holding Cà Lustra’s stunning and ageworthy dry Muscat, made from grapes grown in basaltic soils. Three vintages were presented, which showed thrilling terroir expression and evolution, as did most of the wines.

Franco is holding one of the reds. Cà Lustra makes reds from Bordeaux grapes Cabernet Sauvignon, Merlot and Carmènere, as well as Marzemino, all of which are made from grapes grown on limestone soil. Several back vintages were presented, which showed excellent evolution.

Bordeaux varieties are a strong part of the Veneto winegrowing identity, having been planted in the region as long ago as the mid-1800s. 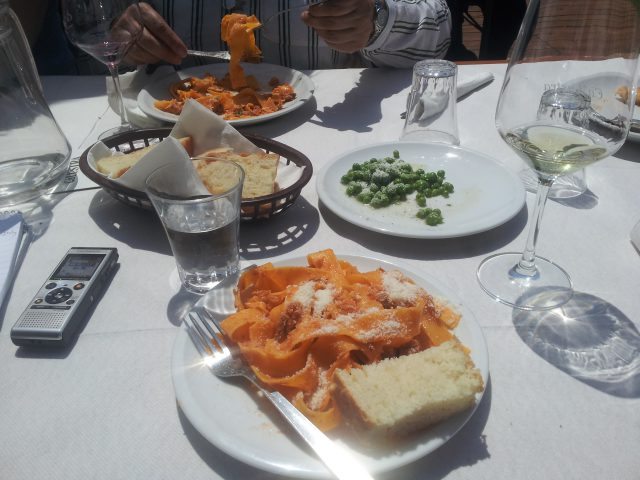 As well as a stonking view and delicious volcanic wines, press were treated to a wonderful picnic of fresh pappardelle with chicken and tomato sauce, and sweet, new season peas with Parmesan and local olive oil. It was a fine lunch. 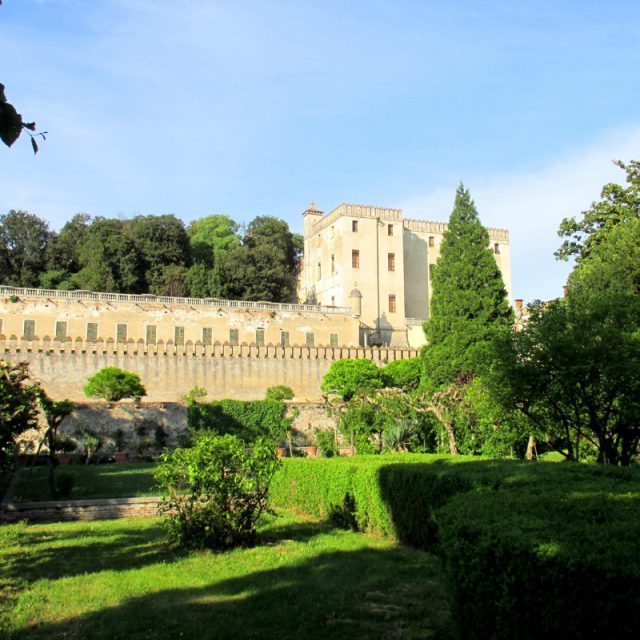 More volcanic wine fun followed at a Colli Euganei volcanic wine tasting at Villa Barbarigo – the ‘Versailles of Veneto’ at Valsanzibio. As well as tasting wines from a selection of producers from the Colli Euganei DOC, visitors were able to sample wines from other volcanic regions including Pantelleria in Sardinia (Vinisola), 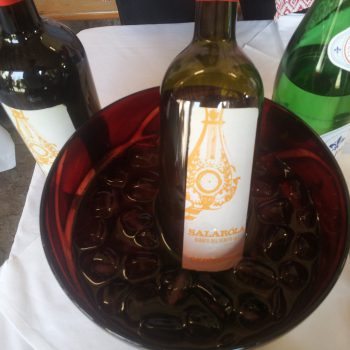 Among the producer highlights were Ca’Orologio. This is a small non-certified biodynamic estate run by Maria Gioia Rosellini and producing mainly IGT (rather than DOC) wines.

The Bianco del veneto IGT pictured is a blend of Moscato, Tai (formerly Tocai, aka Friulano) with some Riesling. Wild-fermented and part-aged in barrique. Rosellini also makes an excellent, vibrant varietal Barbera, among other outstanding wines. 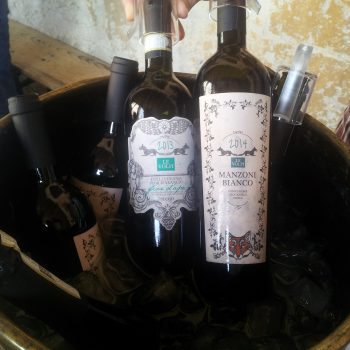 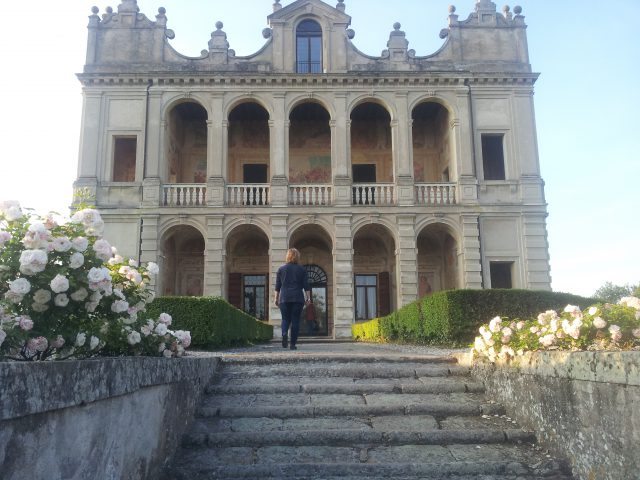 On a welcome break from wine tasting, we next took a trip to the outrageously pretty Villa Capodilista, a classic Venetian villa home to the Emo Capodilista family, whose patriarch, Giordano, represents the 22nd generation. Giordano runs the estate, which makes wine under the Conte Emo Capodilista label. 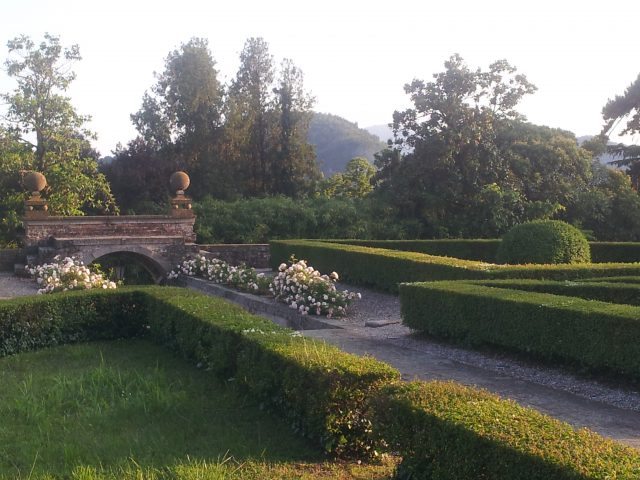 This stunning frescoed villa with topiared garden and extensive grounds was built in the 1500s and is now rented out to (very flush) holidaymakers. 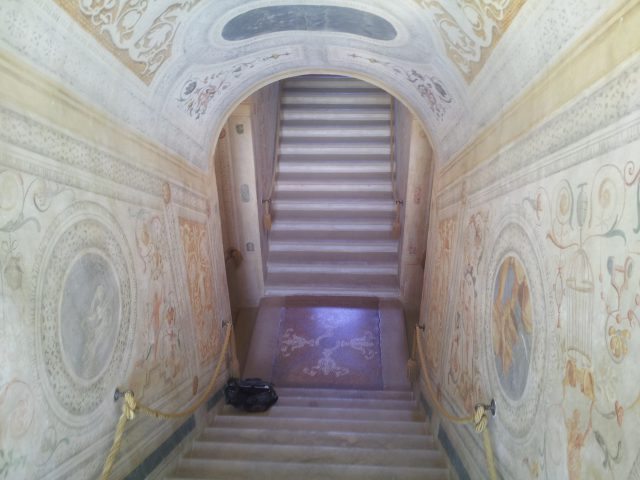 A sample of the frescoed interior of Villa Capodilista. Shakespeare geeks may recognise this cross-shaped staircase – and indeed the villa itself – as one of the locations used in the 204 film adaptation of The Merchant of Venice starring Al Pacino, Jeremy Irons and Lynn Collins. 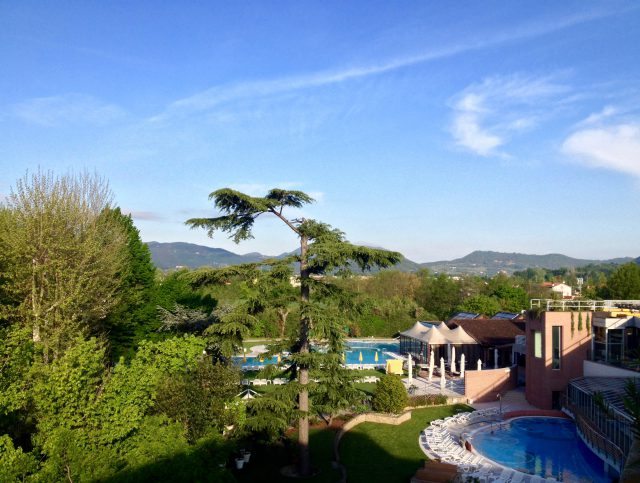 A memorable four days in Veneto concluded with a gala dinner at Colli Euganei Golf Course, which was a very enjoyable affair, but special mention must go to the accommodation at Hotel Terme Preistoriche where, for a blissful hour between a packed schedule of events we journalists were able to relax under bright blue skies in the thermal spa complex attached to the hotel.

People have been attracted to the hot springs of Colli Euganei for centuries, and these days there are scores of excellent hotels which have been built around these thermal sites. They are the perfect base for anyone wishing to explore the excellent food and wine available in this charming volcanic region.