Raising a glass to Cabernet Gernischt

China’s historic winery, Changyu made history by hosting a World Cabernet Gernischt Day at Vinexpo this year in recognition of the mysterious grape variety’s success in China. 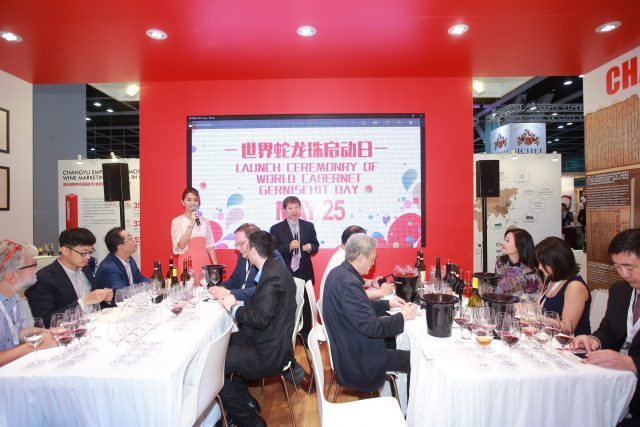 Cabernet Gernischt has previously caused a few raised eyebrows across the wine industry over the last few years, principally because no one was quite sure what it was.

It is grown in abundance at one of China’s largest (and historic) volume producers, Changyu and was one of the first 124 international grape varieties brought over by founder, Chang Bishi.

It wasn’t until DNA profiling revealed in that Cabernet Gernischt which has found a happy home in China was in fact Carmenere though initial studies in China claimed that it was Cabernet Franc.

In 2012, British supermarket chain Waitrose enterprisingly took up the mantle of selling Cabernet Gernischt for £9.99 (97 RMB, HK$114) after wine buyer Katie Mollet spotted an opportunity to bring in lesser-known wine in the UK and offered it as an “ideal accompaniment to a Chinese takeaway.”

Off the back of this, Jancis Robinson also gave 16 points to Changyu’s Noble Dragon, describing it has having “the aroma of herbs of Cabernet Franc and texture of Cabernet Sauvignon.”

Jeannie Cho Lee MW commented: “I am glad that Changyu has decided to launch a Cabernet Gernischt Day to recognize this special variety that performs very well in China. I first tasted Cabernet Gernischt from China in the mid 1990s and followed its progress and the improvements being made are impressive. Except for Chile, where one can find large plantings of Carmenere (same DNA as Cabernet Gernischt), there are very few places in the world that offers this variety so it is unique differentiation point for China. The Noble Dragon, made from Cabernet Gernischt is well-crafted, balanced red wine, with both herbal and black berry fruit flavors supported by soft, ripe tannins. As a leader in the Chinese wine industry, Changyu can help educate consumers about Cabernet Gernischt and help expand the market.”

As of 2016 – the 85th anniversary of its first release – Noble Dragon has been distributed to 28 countries in Europe, America and Asia with cumulative sales of over 430 million bottles.