Barcelona’s Andres Iniesta brings his wines to the UK

Winemaker and Spanish pro footballer Andres Iniesta is preparing to launch his family’s range of wines in the UK, having agreed an exclusive import deal with fine wine traders Twaites & Jones.

Based in the Spanish DO of Manchuela in Spain’s Castilla-La Mancha region, Bodega Iniesta was founded in the 1990s by Iniesta’s father José Antonio, who started with just 10 hectares of wines.

Iniesta, who was born in the Mancheula region and currently plays for Barcelona FC and Spain’s national team, signed his first contract with Barcelona at the age of 16 and used the money to buy a 300 hundred hectare estate in Fuentealbilla, within DO Manchuela, to fulfill his father’s dream of producing his own wines.

Since then the estate, which is 100% owned by Andres Iniesta and managed by his father, has grown to 200 hectares of vineyards across a 400 hectare estate. Planted varieties currently include Macabeo, Bobal and Graciano, as well as international varieties including Chardonnay, Petit Verdot and Sauvignon Blanc.

In 2010, the family built a winery on the estate, allowing it to process its own grapes and produce its first wines. It was following the 2010 World Cup, during which Iniesta helped Spain win the tournament thanks to a goal in the 116th minute, that Bodega Iniesta launched its first wines under the Bodega Iniesta label; Corazón Loco and Finca el Carril.

Six years on, Bodega Iniesta is now the biggest producer of bottled wine in DO Manchuela, with Iniesta’s influence credited by winemakers in the region with helping the DO to increase its wine sales by more than 100%.

Bodega Iniesta currently produces some 1.2m bottles a year with 65% exported to 309 exports marketing including Japan, China, Mexico and Germany. Now, the family is preparing to bring its wines to the UK for the first time.

Explaining the family’s decision to now target the UK market said Chris Twaites, director of Twaites & Jones, said: “They haven’t needed to come here before because there’s been so much interest from other areas in the world. They have always been wary of the UK market. They are aware of the competition here, but it’s an important opportunity”.

Iniesta plans to largely target the UK on-trade, with Ryan Giggs having already confirmed his intention to list the wines in his restaurant, George’s Restaurant, in Manchester.

Overseen by head winemaker Héctor Martínez, Iniesta’s 13-strong UK wine range includes its Corazón Loco brand, which includes a Tempranillo/Syrah blend, Sauvignon Blanc/Vedejo blend and a rosé made from 100% Bobal. The trio of wines are expected to retail in the UK at around £7.

Iniesta’s Corazón Loco Seleccion – a blend of Tempranillo, Syrah, Cabernet Sauvignon and Petit Verdot aged for 12 months in oak – will retail at around £18. Its Hechicero – Finca el Carril, known as The Magician – a red blend produced from grapes grown on the Bodega’s best plots and aged for 12 months in new French oak barrels, carrying an RRP of £12.

The range also includes two organic wines; a red made from Tempranillo and Syrah and a white from Chardonnay and Sauvignon Blanc. Both will carry an RRP of around £9. Iniesta is also planning to launch his Corazon Spumante blanco and rosado sparkling wines – grown in Spain but produced in Italy as a Spumante – in the UK.

“Wine is destined to be one of my great motivations,” says Iniesta. “I want the wine to be a reflection of who I am. The standards are set high, but so are the key pieces to meet them: hard work, family support and knowledge”.

Bodega Iniesta’s range will be available through Twaites & Jones in the UK from November. 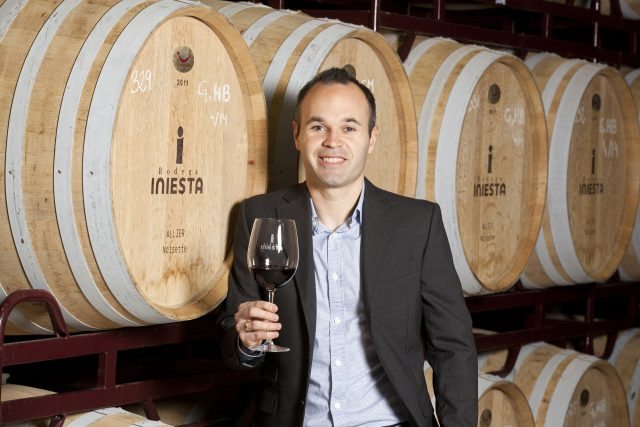