Kronenburg 1664 has brought back French football legend Eric Cantona for its latest advertising campaign, where he shares the spotlight with two Alsatian dogs. 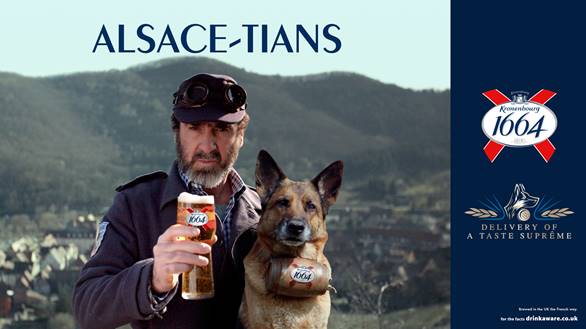 The former French international and Manchester United striker is seen commanding the two beer-delivering canines as they travel around Alsace, the region of France that Kronenburg comes from.

The ad re-imagines the legend of the famous St Bernard breed of dog which would carry a barrel of brandy around its neck to resuscitate avalanche victims in the Alps.

The TV spot will be supported by a PR stunt where the dogs will play the the role of bartenders at the ‘Bar D’Alsace-tian’ in London on 6 May.

It is the latest appearance of Cantona in a longstanding relationship between him and the Heineken-owned French beer brand.

His starring role in Kronenburg’s 2014 campaign led to controversy when British advertising watchdogs banned TV and print ads that could be interpreted to suggest the beer was made in France, when in fact it is brewed in Britain for the UK market.

The ad, in which Cantona says: “Here in Alsace, things are a little bit different… the hop farmers are treated like the footballers of Britain” made too many references to French brewing, the Advertising Standards Authority said. The ban was later revoked.

Heineken brand director of mainstream beers Ifeoma Dozie said of the latest ad: “The Alsace-tians continues the humorous and tongue-in-cheek narrative already established in past campaigns.”