London is the city to visit if you want to eat your way around the world. Only New York and Hong Kong come close to competing with its culinary diversity. Part of what makes the city so exciting is the fact that London’s patchwork quilt of inhabitants is reflected in its cuisine, with every possible type of food available within its beating heart. 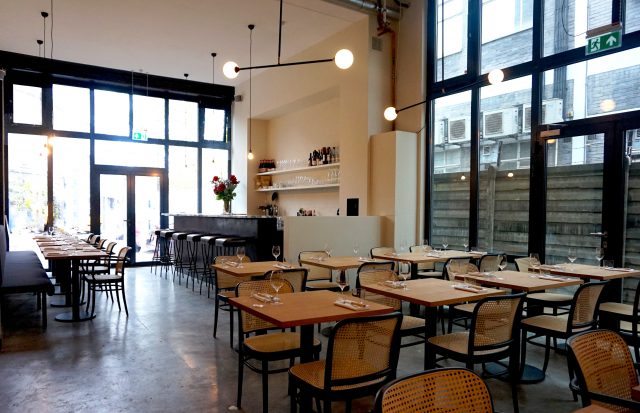 But, despite the capital’s rich pickings on the food front, only a handful of restaurants really nail the concept of food and wine matching, which seems like a missed trick. There are places I’d go for amazing wines, but not necessarily for clever, considered food and wine matching. Ellory, a trendy new site in London Fields, looks set to fill the void, offering exciting, thoughtful wine matches for head chef Matthew Young’s lip-smackingly fresh food.

At Ellory, wine is giving equal love, attention and airtime as food rather than being an afterthought. Keen to open up diners’ eyes and minds to quirky Eurocentric drops is sommelier Jack Lewens, who got on so well with Young when working with him on a food and wine matching event at London Wine Sessions, he decided to open a wine-focused modern British bistro with him.

Young comes by way of St John, The Wapping Project and, most recently, Mayfields. His time at Mayfields shines in his dishes, which slap you around the face with vibrant, fresh, seasonal flavours. Nestled in Netil House, I visited the 48-cover restaurant on a chilly April evening with a artist friend who lives locally.

The square space is light and airy from its floor-to-ceiling glass front. Inside, white walls, low-slung light fixtures and exposed piping lend the place an industrial vibe.

Arriving relatively early, the place was already buzzing with animated banter from an eclectic crowd from cool kids on Tinder dates to media types keen to check out the next big thing in modern British cuisine.

Having learnt his craft at The River Café, Zuma Hong Kong, and as group wine buyer for Sam and Eddie Hart’s Quo Vadis, Barrafina and Fino, Lewens’ ever-evolving wine list is made up of just 50 labels, which he switches up regularly to keep things interesting.

France and Spain dominate the list, though it’s far from traditional, with many of the wines hailing from renegade young producers pushing the boundaries of winemaking, from Daniel Jiménez Landi in Madrid to Marko Fon in Slovenia.

Whetting our appetites with an ice-cold flute of Jacquart, first out of the open kitchen was an ambitious dish of raw mullet, trout roe and tomato. The glistening fish was super saline, its fresh flavour lifted by notes of fennel.

To pair with it, Lewens poured Domaine de Bellevue One Shot of Granite Muscadet 2015, whose notes of jasmine and unctuous texture paired prettily with the raw fish.

Next came a heavier proposition – a lamb sweetbread with wild garlic and spinach, paired with a Vermentino/Macabeu blend from Côtes Catalanes. Hidden under a blanket of green, the fatty, oily sweetbread was given much-needed lift by a citrus thread surging through the dish like a lightening bolt.

The Sherry-like, bone-dry white proved an ideal pairing, slicing through the fat like a silk scarf through a sword. Veering away from the tasting menu, an interlude of creamy burrata, crunchy celery and salty bottarga was one of the standout dishes of the night.

While many would have found the following plate of pollack, white asparagus and hazelnuts swimming in a butter sauce too rich, my threshold for heavy flavours is high and I adored the artery-clogging combo given texture and crunch by the nuts.

Lewens’ wine match – a glass of nutty, salty Jura in the form of 2013 Cuvée des Docteurs Arbois by Lucien Aviet was inspired, harmonising with the decadent flavours in the dish.

Moving on to the meat of the matter, a perfectly pink sliver of middlewhite pork loin with courgette and anchovy was an anti-climax, the flavours too subdued and textures too similar to make an impact. The wine match however, a bright and juicy Garnacha from Sierra de Gredos near Madrid, was charming.

Ending sweetly, a simple pud of vanilla ice cream, strawberries and grapefruit felt like a wonderful reminder that the great British summer isn’t far away, its creamy and comforting character taking me to a happy place.

Ellory’s unassuming interiors mirror its laid-back approach. Service is friendly and informative but never over familiar or cloying. It’s part of a growing band of restaurants serving high-end, Michelin-worthy food in a fun and relaxed environment.

Priced at just £38 for a five-course set menu, with a £30 charge for the wine matches, Ellory’s tasting menu rivals The Manor in Clapham’s £25 set lunch for astounding value in the capital.

Dishes are deep in flavour and artful in composition but simple in structure. Young and Lewens’ passion and pedigree make Ellory an incredibly enticing proposition and one of the most exciting new openings in London. I only wish I lived nearer to London Fields to be able to make the most of it.