A beer for dogs called “Bottom Sniffer” has been launched in the UK, giving owners the chance to partake in a pint with their pooch. 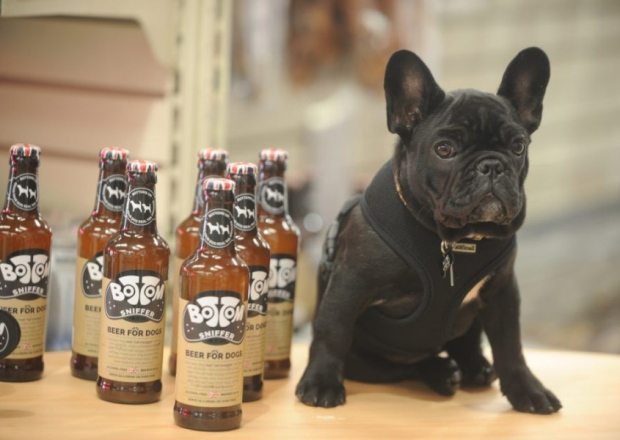 “Bottom Sniffer offers more than a treat for your dog,” reads its website, BottomSniffer.com. “It offers you an experience to share a beer together (humans must drink their own beer), to chill together after a hard day or simply relaxing in the garden. Or perhaps it’s your dogs birthday and you want them to have a few beers at a doggy party?”

The brew, made by St Ives firm Woof & Brew, retails at around £2.99 per 330ml bottle and can be served as a drink or over food.

Explaining its name, BottomSniffer.com said: “Bottom Sniffing is an important part of dogs socialising. Diet is one of the elements that dogs can sense from another dog’s bottom. We think the unique brew of ‘Bottom Sniffer’ offers real value at ‘both ends’ of your dog! Great taste & great appeal!”

Apparently, nine out of 10 dogs “lapped up the samples” when the brew was taste tested by a variety of different breeds.

Bottom Sniffer is by no means the first brew created for pampered pooches. Last year a Belgian beer for dogs called Snuffle was launched in the UK. First launched in the Netherlands in 2009, Snuffle is non-carbonated and made with malt barley extracts, mineral oils and vitamin B in two varieties; basic, with extracts of chicken and beef, and chicken.

In 2013 an Oregon-based brewer produced a non-alcoholic beer for dogs called Dawg Grog – described as “a healthy, nutritional, liquid treat for your best friend”. The brew was made from organic, low sodium vegetable broth, spent grain from Boneyard Brewery, water and glucosamine powder containing ginger, cinnamon, flax seed and honey.