Bordeaux 2015: pace of releases picks up

The number of en primeur releases is starting to pick up with Pape Clément, Armailhac, Malescot St Exupéry and Langoa Barton now out. 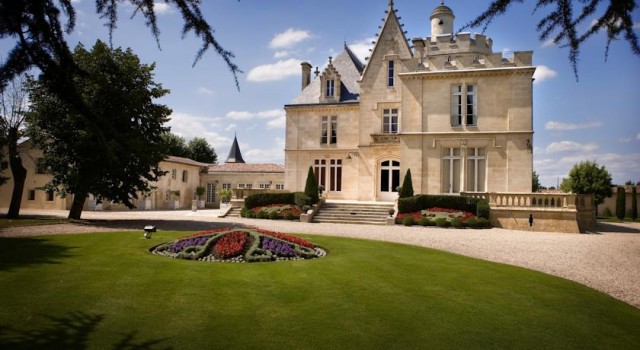 The Graves property came out at €58.8 per bottle ex-négociant. That represented an 18.1% rise on the release price of its 2014 (exactly the increase Liv-ex’s members predicted would be the average for this campaign).

Offered at roughly £625 a case in London, the wine is more expensive than some back vintages but sits at a “significant” discount to its 2005 (by almost 50%), 2009 and 2010 vintages – again an area Liv-ex suggested would provide probably the “best value” for wines this campaign.

That said, with an initial 97-98 points from The Wine Advocate’s Neal Martin, those not convinced by either price, score or the wine’s potential may prefer the 2012, which has a similar score, was one of Robert Parker’s top wines of that vintage and is available for £571 a case.

Again, looking for “value”, these releases are all cheaper than their 2005s by varying degrees.

Armhailac arguably offers the least value against available vintages when looking at price margins (via Liv-ex), although the 2015 has a better score than many back vintages. 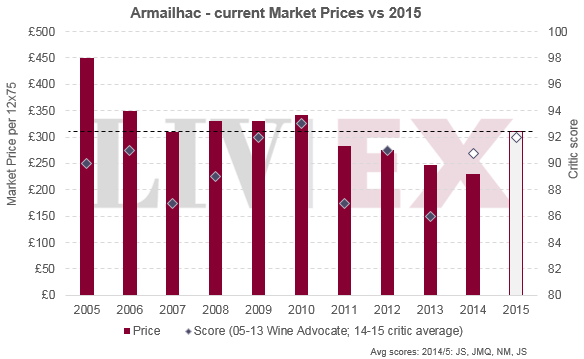 Langoa is likewise a little tight, the similarly scored 2009 and 2014 are both cheaper. In an email offer to its clients though, Corney & Barrow said that Langoa: “Deserves to be first on this offer, a very moderate increase on the 2014 and it fits our criteria, being well under the price of 2005, 2009 and 2010 – we loved the wine and it is a firm recommendation.”

Lea & Sandeman were similarly enthusiastic, saying it was a wine the team “just loved” and while it was a shame it wasn’t “a little cheaper”, it added: “This is a wine that has improved dramatically in the last ten years, and as a drink it’s one we’d look forward to having in our cellars – it’s just delicious.”

Malescot probably presents the most compelling case, its 2015 (with a 93-95 point spread from Martin) is better scored than cheaper back vintages but its release price makes it cheaper in turn than the better scored 2005, 2009 and 2010 wines.

As Liv-ex noted: “For buyers seeking the best of Malescot, this might therefore appear interesting.” 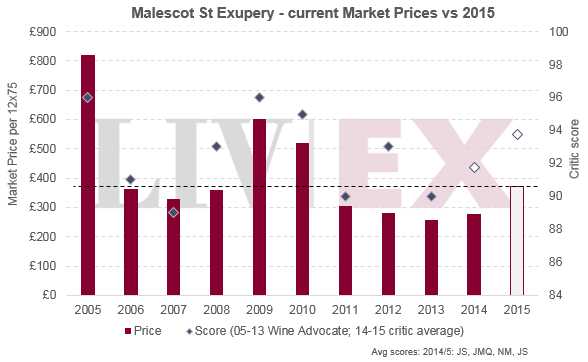