40% of Burgundy affected by frost

The serious frosts that hit Burgundy last week gravely damaged almost half of the viticultural area, according to reports. 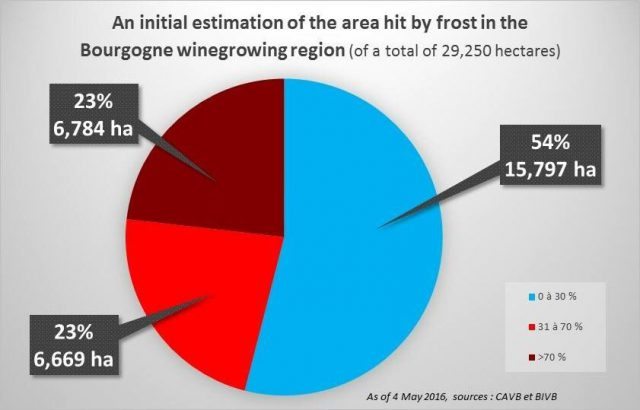 Although the full impact of the frost is still being calculated, 46% of the vineyards – 13,453 hectares – were damaged by over 30% it would appear, according to the Bourgogne Interprofession.

Worryingly, it appears at the moment that 23% of the vineyards have been damaged by over 70%.

As was reported at the time, the frosts of 26/27 April hit the entire length of Burgundy from Chablis to the Maconnais with many areas that normally escape such freezes being affected.

The frosts have been described as the most severe since the early 1980s. Other French regions, most notably the Loire (also in its entirety), were also affected.

Reports from the Loire likewise seem to indicate that damage in excess of 30% is commonplace.

Unlike hail damage, which is more immediately obvious, frost damage can take longer to manifest itself and several growers and the BIVB have told the drinks business it is unlikely to be until the end of this week or the beginning of next that the situation is clear.