Tips for wine brands in restaurants

Neil Grant, founding member and chairman of the South African Sommelier Association (SASA) and owner of three restaurants – Burrata, Bocca and Open Door – shares his insights and tips on how to effectively “Approach Restaurants with Style”.

His talk featured at the latest WineSPIT – a series of professional workshops launched by Debra Meiburg MW aiming to tackle up-to-date industry issues in Hong Kong and provide most-needed skills.

“First of all, you’ve got to come prepared!” he said blatantly, addressing the major complaints by importers that their beautifully-produced brick-thick portfolio were given only two short seconds and quickly tossed aside: “Sommeliers work long hours and they just don’t have enough time for everything. Show me only what I’m missing on my list.”

He advised the eager salespeople to really research the restaurant website first – the menu, the existing wine list, the clientele and style, everything. “Every list has holes. If you can point out the hole and match it before going, then you’ll get on.”

Appointment is also the key. Taking himself for example, available only on Tuesday and Wednesday morning for all three restaurants’ new tasting, he said, “No joking, if you come by during service, you will be spammed.”

As for another big concern raised by the audience – the inevitable listing fee – Neil admitted that “pay to play” was something unfortunate and should be removed, which is what SASA had done already.

“The mindset should be to become the “business partner” of the restaurant and figure out how to help them make money.” He suggested numerous ways to get on the most competitive “by-the-glass” list such as making restaurant-only special labels (even for the same wine) that cannot be found in retail shops or supermarkets to allow for higher margin, or creating a special “sommelier selection” to make extra selling point and also create prestige for the sommelier. “But no matter what strategy, you have to show your constant support and back it up in the long run.” he said. 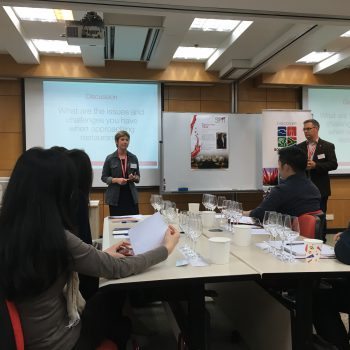 Neil advised the importers to “Create the wine culture first. Work together instead of fiercely competing with each other to just get people to drink wine instead of tea or beer.” He also shared his own experience nurturing the new upcoming wine drinkers in South Africa. “Just simply put a wine glass on the table makes a huge difference and get people to think about wine.”

He also emphasized the importance in helping the concerning restaurant to solve their problems, such as space limitation. Delivery next day with only one case MOQ? Glassware cost? Providing stemless or simply water glasses. And start small, 4 or 6 wines only. “It’s not easy going into unchartered water, but you just have to try. Staying in the safe zone doesn’t make a sale.”

All in all, Neil reiterated that wine was all about fun. “Come up with creative solutions – flights, tasting menus, games or lucky-draws.” That’s how you get success when approaching restaurants.