Century-old whiskey on sale for €10k

The 34% abv bottle of Allmans Pure Irish pot still whisky, distilled by the long-closed Bandon Disitlley in West Cork was bottles by the also defunct Nun’s Island Distillery in Galway.

The whisky is set to be auctioned by Adam’s house next week, which said it “may be the oldest unopened expression of Irish single pot still whiskey sold in modern times.”

Founded in 1826, the Bandon Distillery was owned by Richard Allman, who had served as Liberal MP for Bandon during the rise of Charles Stewart Parnells Home Rule movement.

At its peak the distillery had 15 warehouses storing 9,000 casks of whiskey and the second-largest malt house in Ireland, second only to the Guinness operation at St James’s Gate in Dublin. It closed in 1925 with American Prohibition crippling its operation, missing its own centenary by just a few months.

Originally bottled for a Captain R.E. Palmer, this bottle was bought last year in the UK by collector Willie Murphy, according to reports by the Irish Times.

At that time Murphy described it as “utterly unique”, adding: “There are older bottles of Irish whiskey out there but nothing with the provenance of this”.

There are very few surviving examples of Bandon whiskey. One of the best known is owned by the Old Still Bar, which once housed the distillery’s offices. However most of its contents “boiled away” in a fire that broke out in the pub in 1971.

“Originally introduced as a means of dodging the notorious Malt Tax, the use of raw barley has been a feature of Irish whiskey since the 18th century and although the less efficient green barley produced lower yields, the practice was so ingrained in the taste of many Irish whiskeys that the practice remained even after the tax was repealed in October 1880”, explained Adams, adding: “To contemporary connoisseurs, this bottle is arguably a touchstone to the provenance of Irish whiskey’s distinct culinary heritage.” 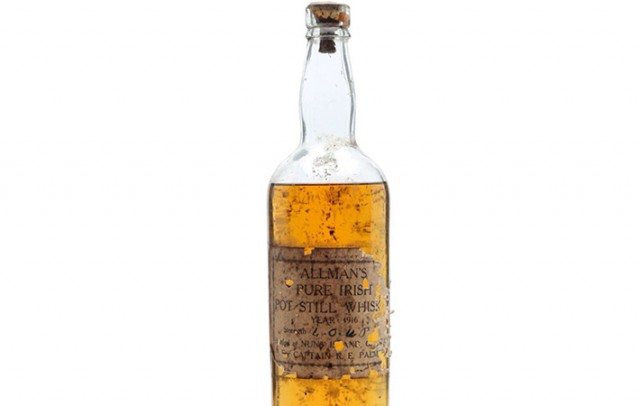