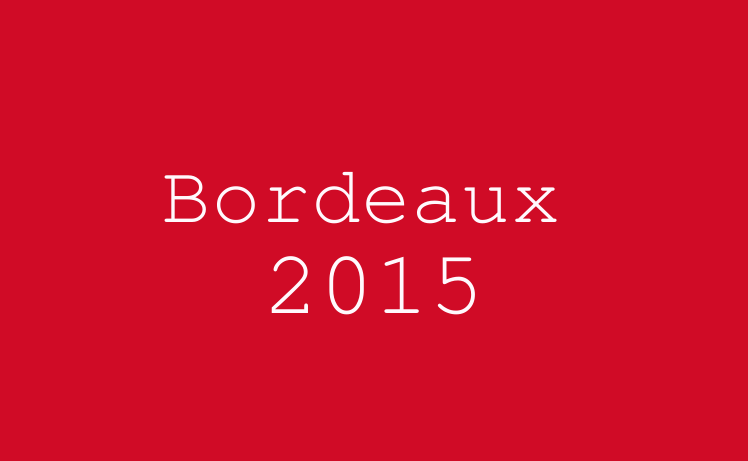 Reports prior to en primeurs was positive and it seemed as though Bordeaux might have matched the heights of 2009 or 2010 with its latest effort.

With the trade now returning or returned from Bordeaux it would appear this view has been tempered somewhat.

Some reviewers have been extremely positive. Liv-ex has looked through James Suckling’s notes on the vintage to find 33 instances of “best ever”, 80 mentions of “powerful”, 16 “wows”, 15 “sexy” notes and one “OMG” – for Clinet.

Rather more though have voiced some doubts, not least Tim Atkin MW who has been quite vocal in his belief that it is a “very inconsistent” vintage as a whole.

“The vintage is by no means homogenous, even within communes,” BI’s Giles Cooper told the drinks business. “[There are] More ups and downs than the press coming out of Bordeaux for the last six months would have us believe.”

If anything, it is this heterogeneity that probably just disbars 2015 from joining the ranks of the truly ‘great’ or ‘legendary’ vintages.

It was not an easy growing season – with extreme heat in the summer and then late rains in September and October.

Although increasingly bullish of the vintage’s qualities with more of the trade around – lest one forget Michel Rolland’s recent outburst – in general the Bordelais have been decidedly more modest of the vintage.

Charlotte Denjean, public relations manager at Château Lagrange, told db that while the estate viewed its effort as superior to that of 2005, “it’s not at the level of ‘09 or’10.”

“It’s an interesting vintage for lots of reasons,” said Anne-Françoise Quié of Château Rauzan-Gassies. “It doesn’t have the exuberance of ’09 or ’10 but it’s tempered and balanced.”

For Lilian Barton of châteaux Léoville and Langoa Barton, the 2015s have more body, more fruit and more structure of the 2014s – “more of everything really.”

The general merchant view appears to be, in the words of Corney & Barrow’s Will Hargrove, that 2015 is a, “very good to very, very good without probably being a legendary one.”

“Where it’s great, it’s great – but it cannot be judged overall as such because of relative inconsistencies. I would class it as very good to excellent,” agrees Cooper.

The Left Bank appears the most inconsistent in terms of results and it is not a year where one can buy in at any level and expect impeccable quality.

Many of the wines from Haut-Médoc and Listrac and Moulis for example showed themselves to be rather tough – at least at this stage.

As Roberts notes, it is many of the second wines, “that show some of the weaknesses of the vintage, particularly in the Médoc.”

Cooper noted too that some of the wines in rain-struck St Estèphe were “a little below the general standard.”

Despite the praise the Right Bank has been generating there are, again, words of caution. Cooper reported some of the wines seemed a little over-extracted, Wine Owners agreed noting on its blog that, “there are plenty of wines that are too big and too powerful.”

Roberts added: “One of the dangers of the vintage is that some Merlots got almost too ripe with the intense heat, so some wines risk having very high alcohol levels. Cabernet Franc in the Right Bank really helped to balance this out.”

The effects of the weather can be a little over-egged as well. It is worth remembering that many vines on water-retentive sites will have sat out of the dryness of the summer in relative comfort while freer–draining plots will have shrugged off the worst of the heavy rainfall in September.

As Quié also points out, the late rains may have made for leaner and more tannic wines in places like Pauillac but they also “stopped the wines from being hugely alcoholic.”

The criticisms aside, the peaks of 2015 are lofty indeed. The best wines of the Right Bank have a lushness to them, those of Pessac are focused and juicy and the Left Bank classically structured and long-lived for sure.

It’s a very terroir-driven vintage in many ways in that the wines taste very much of their place and the effects of the weather upon them.

Margaux is undoubtedly the most consistent commune of the Médoc and Château Margaux itself possibly one of the wines of the vintage.

Nonetheless, as Wine Owners has argued on its site, with the exception of Margaux and Palmer: “In our view the most impressive individual wines from the Médoc come from Pauillac and St. Julien.”

Several merchants commented on the evident “lightness of touch” that had gone into a lot of the winemaking in 2015 – and how much easier they were to taste than the 2010s for example.

For Hargrove, some of the best aspects of the vintage were: “Balance and the generally light handed winemaking, restraint and tenderness seemed a key word, the wines were not hard to taste and the colours were not too dark.”

Roberts too commented that, “the best wines are very natural and producers haven’t tried to over-extract. I love the freshness of the vintage which will make them very digestible and drinkable in a few years time.”

How the 2015s are going to turn out and evolve is obviously a key question – as it is at every en primeur.

More structured than the 2014s yet not as immense as the 2010s nor quite as soft and fruity as the 2009s, will it close up in its youth or stay accessible?

“I’ve asked the same question myself and I’m still not sure,” said Barton.

Bordeaux winemaker and commentator, Gavin Quinney told db he thought the former might be more likely pointing to the tannic structure at the core of most of the wines but it’s also true that with élévage the fruit may come to the fore and make them enjoyable younger.

As always, 2015 is its own beast. “They taste like 2015,” Barton said had been her admittedly facetious response to questions on comparisons to other vintages.

Overall, it is a vintage that defies generalisation. Rolland, in his rant, huffed that it would only be in 10 years that everyone would see how great the 2015s really are and he may very well be right – but this is often the case.

Suffice it to say that those châteaux – from firsts to fifths – one might have expected to make a good wine have done so but it is a vintage where one might have to pick rather carefully lower down the scale.

Roberts concluded: “The best wines will give huge pleasure and have the balance and potential to age extremely well. It is wrong to put 2015 in the same category as some of the great years, but there are some extremely good wines.”