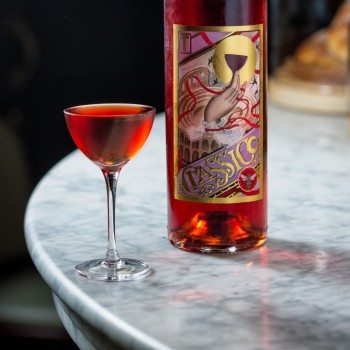 Cooked “sous-vide” at a very low temperature for several hours, the gentle heat stimulates the breakdown of aromatic compounds in the liquid and speeds up the ageing process, creating a drink that is almost identical to a bottle-aged cocktail, says Conigliaro.

The Classico Negroni comes in a bottle adorned with a hand-drawn label designed by Conigliaro’s long time friend, and London tattoo artist, Mo Coppoletta, who is also a co-founder of Bar Termini in Soho.

Having worked in the drinks industry for more than 25 years, Conigliaro is drinks consultant to the Zetter Townhouses in Clerkenwell and Marylebone, Bruno Loubet’s Grain Store restaurant on Granary Square, King’s Cross, and also curated the drinks list at Heston Blumenthal’s Dinner in Melbourne, Australia.

He published his first book Drinks in 2012, winning the James Beard award for ‘Best Drink Book’ when published in the USA in 2014. A second book, 69 Colebrooke Row, followed in 2014.

Tony Conigliaro’s Classico Negroni (70cl bottle/18.9% ABV) is available now at The Drink Shop and Amathus Stores with an RRP of £36.95.