Chardonnay is ‘the white truffle’ of Champagne

Philippe Sereys de Rothschild, president of Château Mouton Rothschild, has made Chardonnay his focus at his Champagne project as he believes the grape to be the “white truffle” of the region.

Speaking to db at The Ritz before a dinner celebrating a collaboration between Champagne Barons de Rothschild and the hotel group, Sereys de Rothschild said:

“Chardonnay is the white truffle of Champagne – it’s the best and we wanted to do the best. In order to put the Rothschild name on it, it had to be the best. Also, there are only a couple of Chardonnay specialists in Champagne like Salon and Delamotte, which gives us a chance to stand out.

“I love Champagne – my grandfather was one of the main shareholders of Ruinart but sold his stake in the ‘50s. He also had his own-label, Reserve Baron Philippe, made by Henriot, which I grew up drinking as a teenager.”

Starting out in 2005, the Champagne Barons de Rothschild range is formed of five wines: an extra brut, a brut priced at £42, a blanc de blancs, a pale pink rosé made from 85% Chardonnay and a prestige cuvée priced at around £200. 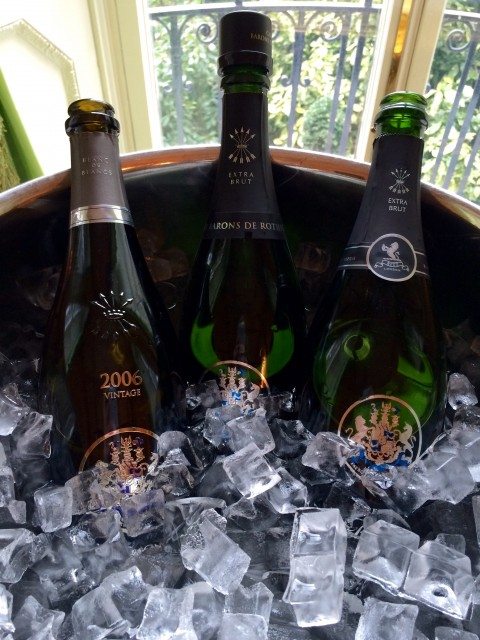 The company also makes a bespoke vintage expression for The Ritz hotel group, with 500,000 bottles make across the range a year.

With few newcomers to the region, de Rothschild was pleasantly surprised at how welcoming the Champenois were to him and his family.

“People have been very welcoming  – they seem happy to have a family come to the region as so many of the houses are owned by big corporations now.

“We were walking on eggshells at the beginning. The biggest challenge was sourcing the grapes and building relationships with the growers.

“Trust is really important in Champagne. It took five years to find the right growers and five years to build up our stocks; it was a long process,” he said.

Managing director Frederic Mairesse told db that the Rothschilds went against the advice they were given when starting out in the region.

“When we came to Champagne everyone was advising us to make wine with Pinot Noir and Menuier as the majority of vineyards in the region are planted with those grapes, so naturally we decided to do a Chardonnay,” he joked.

“We knew we wanted to be a small producer at the premium end. We source from 75 hectares of vineyards in the Côtes de Blanc, 82% of which are grand and premier cru sites.

“In 2013 we bought a 0.5-hectare clos in Vertus that we hope to make a single vineyard wine like Krug’s Clos du Mesnil from one day but the vines are too young at the moment – they need at least another eight years. It’s called Clos Napoleon at the moment but we’d call the wine Clos Rothschild,” he added.

While de Rothschild admitted that he was “looking to buy land” in the region, he stressed that it wasn’t an urgent situation. “We’ve been busy building the brand over the last five years. Whenever we make a decision all three branches of the family have to agree on it or it won’t go ahead.

“We’d like to buy more land and get a lot of calls form people trying to sell tiny plots but it isn’t worth it for us unless it’s at least half a hectare,” he said.

“We decided not to have any Pinot Meunier in the blend as it doesn’t age well and our Champagnes are aged on the lees for longer than most. The brut is aged for at least four years, sometimes five, and the vintage 7-10 years,” he added.

While Rothschild looks to Salon as a model, he doesn’t want to age his Champagnes in oak as he’s seeking “grapefruit freshness” from the wines. He admitted that he’d never tried English sparkling wine but was curious to do so after reading about Taittinger acquiring land in Kent.

Champagne Barons de Rothschild’s key markets are France, the US, Japan, China, Hong Kong and Brazil. The Champagnes are served at all events and dinners hosted by the Rothschilds and it its various private banks around the world.