Bolney Wine Estate is to invest around £1m in a new winery and a small wine museum at its Sussex site, as it expands production to around 400k bottles a year. 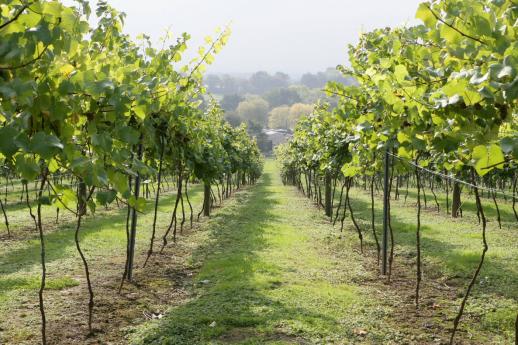 Work on the new winery is expected to start at the end of this year, Bolney’s md and head winemaker Sam Linter told the drinks business, and comes as part of the vineyard’s ten-year growth plan.

“Significantly” larger tanks holding around 30-40kL will replace the current 13.5kL tanks, and the new metal framed winery will be sited to make use of the naturally sloping land to include a gravity-fed press. It will also feature easier access to allow tractors to bring grapes into the winery more easily during harvest time and catwalks above the tanks to boost efficiency.

Linter is also already talking to specialists about boosting the sustainability of the site to incorporate geo-thermal and air chill technology.

“We use a lot of heating and chill in the winery, so we want to look at using more sustainable technology, Linter said. “We looked at solar, but it wasn’t able to do what we wanted.”

Linter said there was no reason why the English wine industry would not keep growing, but pointed out that availability was still a problem for many consumers.

“The issue is availability – people want to try English wine, but can’t find where to buy it. It is not listed enough because we are not producing enough [as an industry],” she admitted.

Once the new building is completed, the existing winery will be turned into additional storage to cope with increased production, with a small section of the barn developed into a small museum charting the development of the English wine industry.

“Bolney was one of the earliest vineyards so we have lived through the development of the English wine industry,” Linter told db. “A lot of people have come in recently – which is great, as they move the industry on – but it’s not been recorded from the start. And that is what we’d like to see.”

The move follows the development of a new café and visitor facility this year, which will see a mezzanine floor and outside balcony over-looking the vineyards this spring. This is intended to improve its visitor offer and allow extra space for tasting and visitor interaction.

“It is not just about doing a tour of the vineyard followed by a tasting and food matching – although that is very popular – but we want to use our knowledge and develop something for people who know more about wine, and who are interested,” Sam Linter told db. “It will also make the vineyard more accessible – we are not a massive site, but we want to make it an experience.”

The new facilities are expected to see a boost to visitor numbers from around 15-16k a year to around 50k, she said, with a large proportion – around 35k of visitors, coming as self-guided and drop-in visitors.

In October, Linter told the drinks business it planned to significantly increase production, doubling output by 2020 through partnerships with local growers in the area and then doubling it again by increasing its own acreage.

Currently the vineyard comprises 39 acres, but it is supplemented by partnerships with producers who own around 65-70 acres of land in the surrounding area.