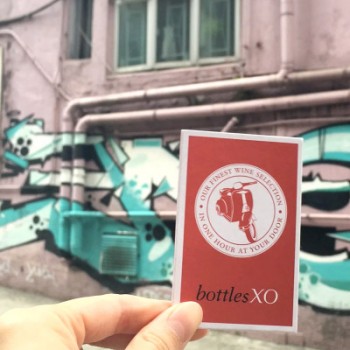 Catering to Hong Kong’s residents who are endlessly spoilt with fast and generally reliable food delivery services, BottlesXO claims to cut out the ‘middlemen’ of importers, wholesalers and retailers and deliver wine at around 20% less than the retail price.

The Shanghai company also promises to deliver the wine within 60 minutes and at the perfect temperature – but for now, only to Hong Kong’s expat-populated areas of Central, Sheung Wan and Mid-levels where customers can order via the BottlesXO smartphone app.

Co-founder, Thilo Fuchs said he was getting increasingly frustrated with the high prices set by retailers for what he saw as poor quality wine.

“In Asia, wines offered in supermarkets are often expensive and mass-produced,” he said. “At BottlesXO, we want to make good wine accessible and affordable by connecting the customer to the wine producer more closely.”

BottlesXO is keen to tap into Asia’s younger generation who are eager to try new varieties of wine and increase their knowledge – the delivery service has already been launched in Shanghai and Suzhou in China’s Jiangsu province –  and for novice wine enthusiasts, BottlesXO also suggests food pairing options.

“We want to show young professionals in their mid-20s in Asia that wine can be an integral part of their day,” said Fuchs.

The start-up company sources red, white, rose and sparkling direct from wineries in Europe at competitive prices, starting from HK$95 (£8) for red and white to HK$150 (£13) for prosecco and the cheapest Champagne. Delivery is also free with no minimum spend.

BottlesXO rolled out its Hong Kong delivery service last week and the app is available for Apple and Android phones, as well as WeChat.