Albert Adrià, the chef brother of El Bulli founder Ferran Adrià, is to take over the restaurant at the Café Royal hotel in London’s Piccadilly for 50 days next spring. 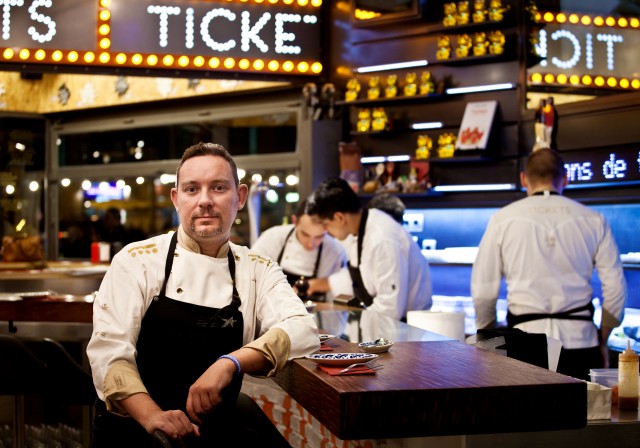 The 50-day residency, titled “50 Days by Albert Adrià”, is the chef’s first project outside of Spain, where he runs the successful tapas bar Tickets in Barcelona.

The Michelin-starred, theatrical-themed venue is known for its outlandish molecular cuisine, and serves the likes of exploding olives, basil air waffles and mini “airbags” stuffed with manchego cheese foam.

Prior to Tickets, Adrià worked at El Bulli for 23 years. In addition to the tapas bar, he and Ferran also run Nikkei restaurant Pakta, Mexican sites Hoja Santa and Niño Viejo, and vermouth bar Bodega 1900, all of which are in Barcelona.

Adrià’s London residency will run every Monday to Saturday from 12 February until 9 April 2016. Tickets cost £150 per person excluding drinks and service.

The evening will begin in the ornate Oscar Wilde bar, where the writer famously wooed his lover Lord Alfred Douglas (known as “Bosie”), with a cocktail and signature snacks created by Adrià, followed by a tasting menu dinner in the Domino restaurant.

Details of the dishes are being kept under wraps but will be inspired by both Catalan cuisine and flavours found on Adrià’s travels around the world.

Other guest chef residencies at the Café Royal have included Spanish chefs Paco Roncero and Aurelio Morales, and Milanese chefs the Costardi brothers.

Tickets entered the World’s 50 Best Restaurants list for the first time this year in 42nd place for its cutting-edge tapas. At the same awards ceremony, Adrià was crowned the world’s best pastry chef.

For more on Albert Adrià, see the drinks business Spain report, published with the December issue of the magazine.