Six white grapes to watch in the Douro

Following on from our article on the red grapes to watch in Port country, we turn our attention to the potential varieties for making great white wine from the Douro.

While yesterday’s story on red grapes considered a selection of niche varieties for boosting the future quality of Port, today’s piece looks at a fresh set of possibilities for making a great white table wine from the Douro.

The grapes were recommended by the Symington’s head of viticulture R&D, Fernando Alves, who has been put in charge of a new experimental vineyard in the hottest part of the Douro to uncover which native grapes are best-suited to the conditions of the Portuguese region.

Within the site, which covers 2.25 hectares in the Douro Superior, are 24 white varieties, including international grapes such as Chardonnay, Sauvignon Blanc and Semillon.

Symington Family Estates has already created a red fine wine from the Douro with Chryseia, a joint venture begun in 1999 with Bruno Prats, Frenchman and former owner of Château Cos d’Estournel in Bordeaux.

However, there is still scope for the Symingtons to craft a top-end white from the region.

“The Douro is one of the most interesting places in the world for wine right now, and we can make some really interesting white wines,” said Paul Symington, chairman of the company, which owns more than 1,000 hectares in the region.

Agreeing, Charles Symington, who is head of viticulture at the family company, stressed his belief in the quality potential of white wines from the Douro.

“Great white wines from the Douro is an option,” he commented, during a discussion with the drinks business earlier this year. Continuing, he suggested that, unlike for reds, making a top-end white might require the use of international grapes.

“We are much more interested in foreign grapes for whites than we are for reds, because the native red grapes in the Douro are exceptionally good”.

He also admitted, “I’ve been wanting to make a great white for many years, but I don’t know whether it will be done with local varieties or not… I’m thinking more along the lines of the white Rhône model, and if I can make a white like that with our own varieties, then that’s better, but if not, then I’ll go off-piste; it’s fun stuff.”

Indeed, some believe that Niepoorts whites are better than his red table wines.

Over the following pages we have listed six grapes that Symington Family Estates believe have the necessary characteristics to produce great white wines from the Douro.

This native Douro grape is favoured for producing age-worthy whites with good acidity and a slightly oily texture.

Once wrongly called Verdelho in the Douro – a grape that is widely planted in Madeira – Gouveio is in fact the same grape as Godello of Spain’s Galicia, although the variety was first mentioned in connection with the Douro in 1531, according to Wine Grapes.

Less than 1,000 hectares of Gouveio are planted in Portugal, mainly in the Douro, but also in Dão, and in both regions it can be used to make full-bodied whites, although it is almost always blended with other grapes. Occasionally in the Douro, it is used in white Port too.

Indigenous to the small Portuguese sub-region of Bucelas in Estremadura, Arinto is favoured in the Douro for its ability to retain acidity, even in very hot sites.

Mainly used as a blending grape, it is used to make varietal wines in Bucelas and sometimes Vinho Verde too, although it is more commonly blended with Alvarinho and Loureiro in the latter region.

Due to its ability to produce wines with a lemon freshness even in hot climates, Arinto, which is one of Portugal’s oldest grapes, is attracting greater attention from wine producers in the Douro, and elsewhere in the country. 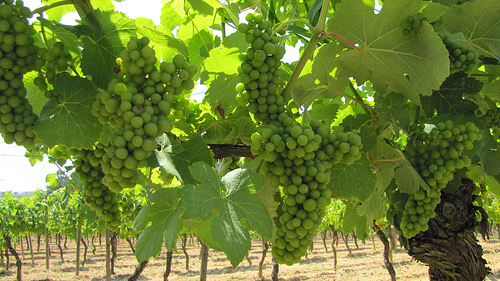 Described by Symington viticulturist Fernando Alves as a cousin of Arinto, Dorinto produces citrus-scented wines, while proving particularly drought-resistant, a useful trait in the Douro Superior.

The variety was in fact historically known as Arinto no Douro, but was renamed Dorinto to distance itself from Arinto, which has a different DNA.

In any case, Dorinto does not originate from the Douro, but Portugal’s Dão region.

According to Wine Grapes, as little as 20 hectares of Dorinto is planted in Portugal, with the majority located in ancient vineyards of the Baixo Corgo, the Douro’s mildest sub-region.

Almost exclusively grown in the Douro, Rabigato is appreciated for its ability to retain acidity in hot areas as well as produce age-worthy whites with floral aromas.

Indeed, so well adapted is this grape to the climate of the Douro, Symington Family Estates is top-grafting Rabigato onto its plantings of Malvasia Fina.

It also featured last year as a possible “flagship grape of the future”, when grape geneticist and Wine Grapes co-author José Vouillamoz picked out 14 obscure varieties that he believed could be (or at least should be) well-known and widely-planted grapes of the future.

Found in the old mixed white vineyards of the Douro, Viosinho was described as a “great variety” by Symington viticulturist Fernando Alves, although it has been historically unpopular with growers due to its low yields.

According to Wine Grapes, the variety originates from the Douro, and has been dubbed the Portuguese Sauvignon Blanc for its intense aromas.

Only around 100 hectares exist in Portugal, although plantings are increasing due to Viosinho’s potential to produce full-bodied, aromatic and long-lived whites.

This international grape originates in the northern Rhône and is favoured by Charles Symington, who believes that it could be the source of a Douro fine white of the future.

Favouring acid soils in hot regions, it is certainly naturally well adapted to the Douro, and fits with a Symington sentiment that a great Douro white should resemble one from the Rhône.

“I like Viognier a lot and I think it could be very interesting for making a wood-aged white from the Douro,” Charles Symington told db.

He also said that using an international grape to make a varietal white in the Douro would be a big departure from the traditional approach.

“Very few wines from the Douro are mono-variety, or use foreign grapes,” he stated.

Click here to see five red grapes to watch in the Douro.