Lesser-known Bordeaux on the move

It is easy to judge the performance of the secondary wine market on the Bordeaux first growths, but looking beyond the leading names shows strength in the region’s depths, according to Liv-ex.

First growth prices have fallen 39% since the market peaked in 2011. The last year has seen some recovery, with the Fine Wine 50 index rising 0.94%, yet it is undeniable that the headline numbers are negative. But are the first growths an accurate representation of the whole Bordeaux market? We have examined in detail the performance of the sub-indices of the Liv-ex Bordeaux 500 Index to see how other wines have fared.

As shown in Chart 1, the Right Bank 100 has been the star performer since the market peaked, climbing 7.6% over this time. There is a clear divide in the performance of the ten individual wines: five have risen, and five have fallen. The top performer is Angelus, which has rocketed 35.5% since July 2011. It was boosted by its promotion to Premier Grand Cru Classé A in the September 2012 St Emilion reclassification, while fellow promoted wine Pavie has risen 17.3%. Clos Fourtet, with a 33.8% gain, is the second best performer, having seen trade invigorated in recent years by the 100 points awarded to its 2009 vintage, and Parker’s description of the wine as “one of the greatest young Bordeaux I have ever tasted”.

Nonetheless, the impact of the promotion has slowed. Following 13 consecutive monthly rises throughout 2012-2013, the Right Bank 100’s growth has stagnated, and the second, third, fourth and fifth growths from the other side of the Gironde have outperformed it.

While Bordeaux has been a weak performer in recent years, the numbers show that pockets of recovery are underway. The 2009-2011 bull market was driven by brand status. With buyers now seemingly more motivated by quality, it would seem that the fundamentals of wine investment are returning. 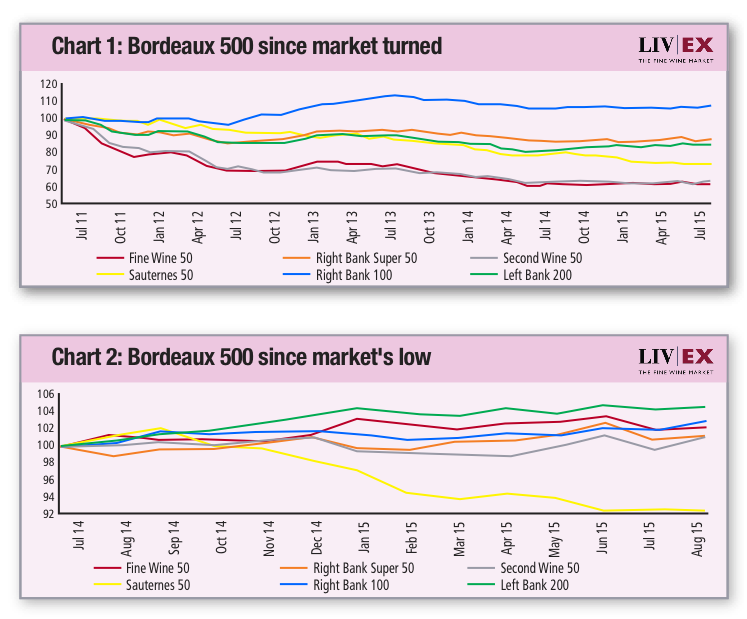