It is well known that Napoleon drank Vin de Constance while in exile on St Helena, but his cellar was apparently much broader than first thought. 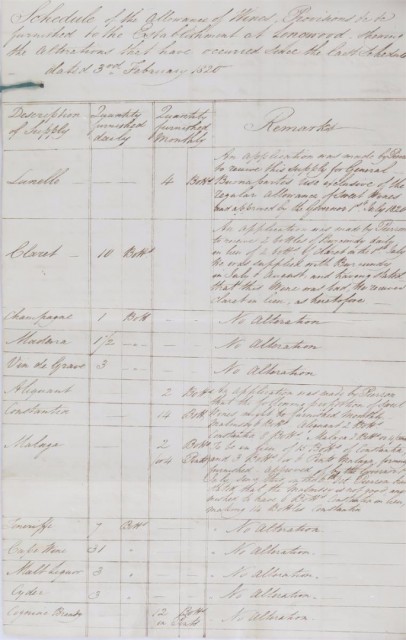 Napoleon is often quoted as saying of Champagne: “In victory you deserve it, in defeat you need it.” Having lost the battle of Waterloo he appears to have followed his own advice.

New documents sold at an auction in Salisbury this month show the food and drink provisions of 1820 for the exiled French emperor and his staff while imprisoned on St Helena.

The daily wine allowance was comprised of: a bottle of Champagne, 10 bottles of claret, half a bottle of Madeira, three bottles of “Vin de Grave” (white Bordeaux?), a bottle of “Tenerife” and 31 bottles of “Cape Wine” as well as “cyder”, malt liquor and other drinks.

Meanwhile, his monthly allowance included 14 bottles of “Constanter” (Constantia/Constance?), two to four bottles of “Malaga”, two of “Aliquant” (Alicante presumably and using the synonym for Grenache as Alicante Bouchet hadn’t been created at this time), four of “Lunelle” (Muscat de Lunel perhaps) and 12 bottles of Cognac.

He also exchanged two bottles of claret for two bottles of Burgundy in July and August, Chambertin being a favourite of the emperor according to Comte Emmanuel Las Cases who accompanied the Corsican for a substantial part of his exile.

The documents were sold for £800 by Woolley & Wallis and show the “Allowance of Wine and Provisions” for Napoleon and his staff. Sadly, the producers of the wines remain a mystery.

In addition to wine, Napoleon and his court in exile received a food allowance of 50 pounds (lbs) of beef and veal, 68lbs of bread, 50lbs of mutton and pork, one roasting pig, two turkeys, 12 pigeons, four ducks, nine fowls, two geese, 42 eggs, 15 bottles of milk, cheese, mustard, salt, flour, rice, vegetables and “tongues”. With items either provided daily or monthly like the wine.

Napoleon had been exiled to the small Atlantic island following his defeat at the Battle of Waterloo in June 1815.

He died on St Helena in 1821 at the age of 51 having reportedly drunk a glass of Vin de Constance a day in the week leading up to his death – though this was not the cause of his demise it should be noted. His body was repatriated to France in 1840.

This is not the first piece of Napoleonica to have come up for auction this year, Christie’s having sold a bottle of “wine” that had been in the emperor’s carriage at Waterloo and a hat he wore on campaign in Poland in 1807 at a sale in July. Interestingly the bottle of wine from the carriage was also said to be “Malaga”.