Vidiano is Crete’s most promising white variety with which to build the country’s reputation on the international wine market, according to one winemaker who has described it as the Greek equivalent of Chardonnay.

“For me Vidiano is the top grape of Crete”, said Demetri Tsoupeis, winemaker at Alexakis Winery in Crete, speaking to the drinks business on a recent trip to the island. “Vidiano is like Chardonnay. For me it is the future [of Cretan wine]”.

Vidiano, a white variety native to Crete, has gained popularity in recent years among winemakers, alongside the island’s other native white variety Vilana.

Easy to pronounce, fresh and not subject the oxidative problems that can affect Vilana, Vidiano seems to have the qualities necessary to attract the attention of consumers outside of Greece looking to discover a new varietal. Its rise has happened at the same time as an increase in quality at wineries across Crete, generally led by younger, often foreign-trained winemakers.

Alexakis is the largest winery on the island of Crete and was founded by oenologist and chemical engineer Stelios Alexakis in the 70s. It’s now run by his two sons Lazaros and Apostolos, both oenologists with degrees from the Universities of  Florence in Italy and Fresno in California respectively.

Citing the spread of Pinot Noir as an example of what Vidiano could achieve, Tsoupeis believes winemakers in Crete should be encouraging those outside of Crete to plant the variety in order to raise its profile.

“We have got to get Vidiano growing elsewhere, Crete will always be its motherland”, said Tsoupeis. “If you drink an Assyrtiko, you want to drink a Assyrtiko from Santorini as that is its motherland.”

This, coupled with greater promotion of Cretan cuisine and blending indigenous with international varieties, is what will improve Crete’s presence outside of Greece says Tsoupeis.

Referring to a typical blend of Syrah and Kotsifali – a high alcohol red grape native to Crete – Tsoupeis said: “Everyone knows Syrah. It is the key to opening the international market because people know it.” 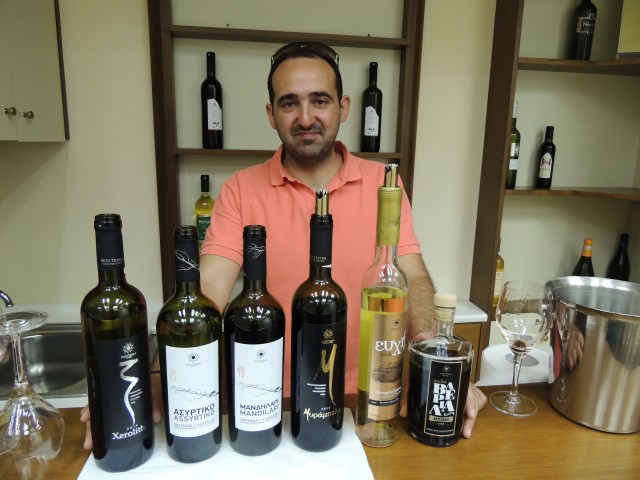 George Stratakis, winemaker at the Mediterra Winery agrees, but notes that while international varieties might be their ticket in, Greece’s long-term strength lies in further developing its indigenous varieties and in raising their profile on international markets to maximise their potential.

Mediterra Winery, located in small village within the appellation zone of Peza, was founded in 1973 and today produces two million bottles a year and 80 different labels. Its Xerolithia White 2012 – a 100% Vilana – is already stocked by Oddbins in the UK.

“In the last two or three years winemaking in Greece and Crete has improved and we are making much better wines”, said Stratakis. “But we have to turn toward our local varieties to try and develop and show own character, and tell people that we have these varieties and are making great wines, that are also well-priced.”

Its Pyrorago is a dry red made from a blend of Syrah, Cabernet Sauvignon and Kotsifali, a variety also often blended with Mandilaria.

“People don’t know about Kotsifali or Mandilaria or Vidiano, so if we put it with a variety people do know it’s easier to sell”, said Stratakis.

When asked to compare Kotsifali to an international variety Stratakis said it was “completely unique” and unlike any other variety.

“It’s like trying to compare Syrah to Merlot”, he said. “It’s different and not comparative to any other grapes. We like to make something unique at Mediterra, as a philosophy.”