Although Hong Kong has a thriving drinks scene today, wine has been a relative newcomer to the city and prior to the late 1970s it was Cognac with ice cubes that dominated bar tables.  Thanks to some rather jaunty advertising and the growth of importers, Hong Kongers now have a plethora of wine choices. 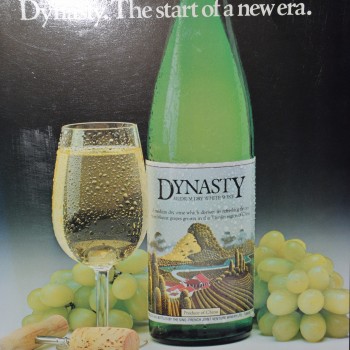 Since wine was imported to Hong Kong in the 1960s, companies recognised the value of good marketing and before too long, adverts sprung up in revered newspapers such as the SCMP and the Standard advertising choice tipples for discerning gentlemen to enjoy after a long day in the office.

The gloriously named Remy Martin Far East Ltd and its sister company Remy Fine Wines were one of the first wine importers to hit Hong Kong and we’ve unearthed the following advertising gems which date from the late 1980s to mid 1990s. 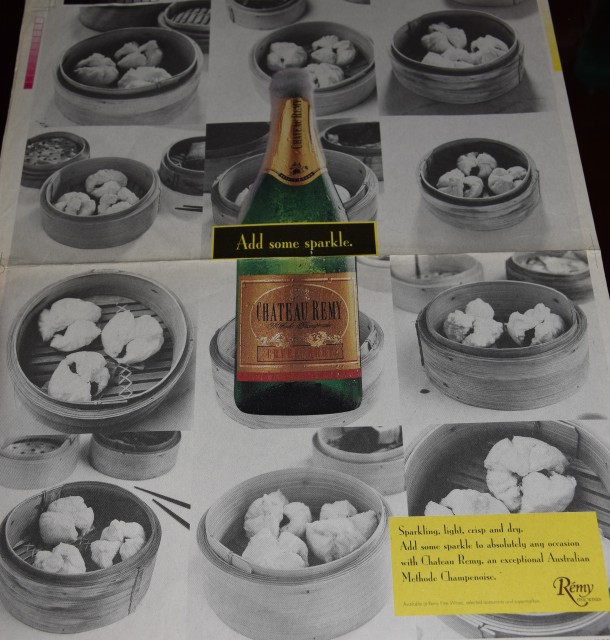 An early advert from Remy Martin, “Chateau Rémy” was a “méthode champenoise” wine from Western Victoria, Australia which is now known as Blue Pyrenees. Somewhat ahead of its time, the advert demonstrated the wine’s propensity for Cantonese food pairing – something even today’s wine companies are struggling to crack. 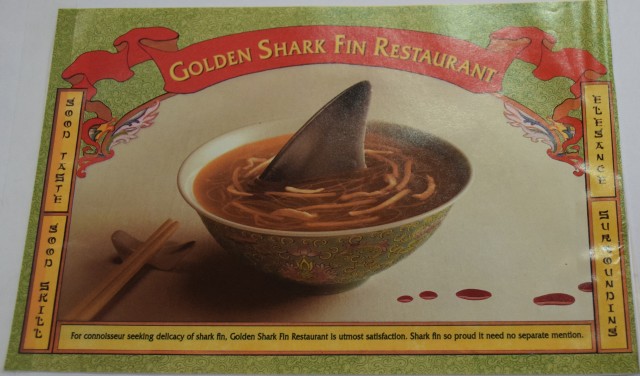 An advert which would definitely not appear nowadays on account of animal rights lobbyists – despite shark fin still appearing in many Chinese restaurants as a delicacy. Back in the mid 1990s however, there were no such qualms… 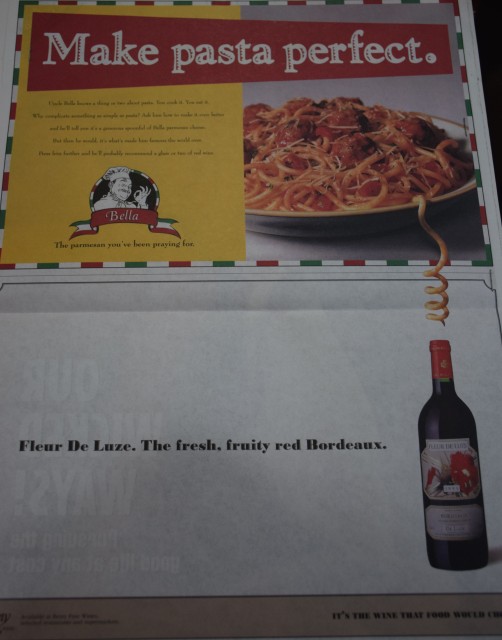 A Hong Kong favourite in the mid 1990s, Fleur de Luze was (and still is) made by the negociants Maison A. de Luze et Fils, founded by Baron Alfred de Luze, Grand Duke of Hessen. Described as “making pasta perfect,” Fleur de Luze was the go-to affordable wine for busy expats. 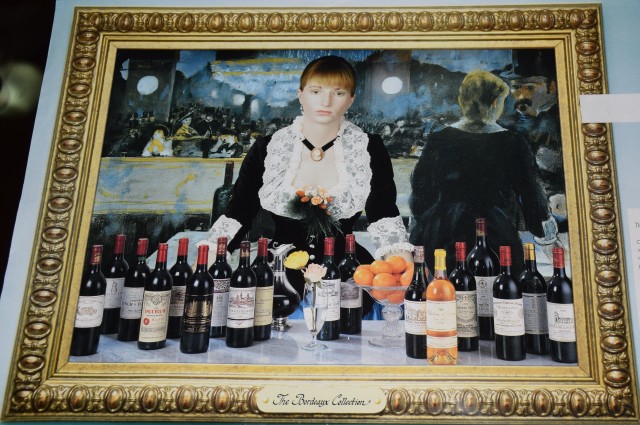 Despite her less-than-cheery demeanour, the girl is promoting one of Hong Kong’s largest selections of top Bordeaux at that time. Enthusiasts could have picked up a bottle of Petrus at any of Remy Fine Wine’s retail outlets in Exchange Square, Taikoo Shing, Pacific Place, Harbour City or Lee Gardens. 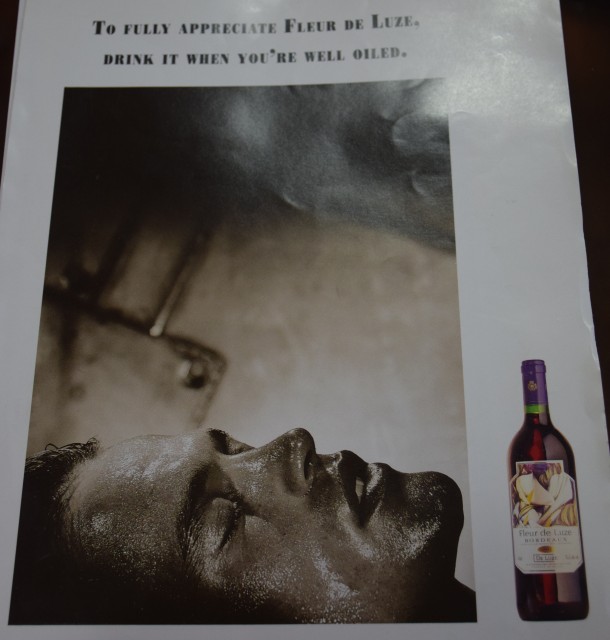 Another ad for Fleur de Luze, though it could easily be a David Gandy advert from today. It solemnly advises: “To fully appreciate Fleur de Luze, drink it when you’re well oiled” – presumably meaning when one is operating efficiently as opposed to drunk.

The winemaker of Clos Vougeot in the 1960s, Alfred Noblet proudly mentions négociant Alexis Lichine who proclaimed his Vosne-Romanée as “the finest vintage of 1971”. Noblet’s and Lichine’s wines were available through Watsons Wine Merchants. 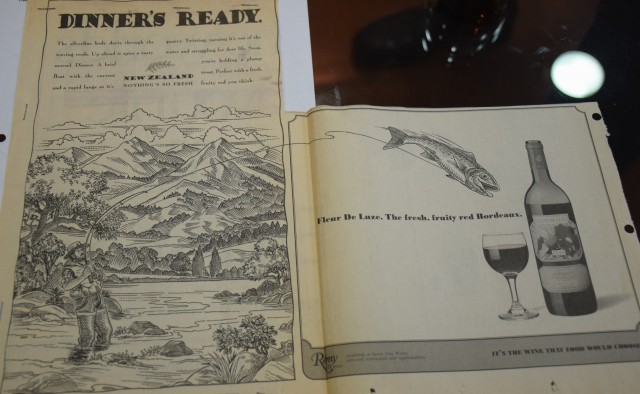 Fleur de Luze certainly being the flavour of the mid 1990s, this SCMP advert challenged traditional views that only white wine should go with fish. 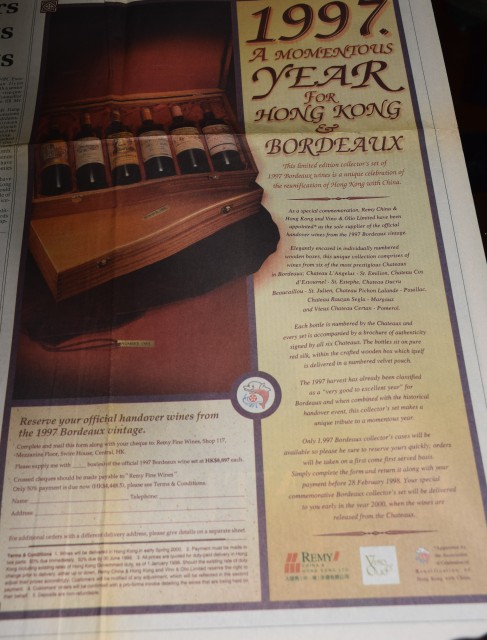 Expats who mourned the moment that Hong Kong was handed back to the Chinese in 1997 could at least pick up a case of 1997 Bordeaux. Remy cleverly cashed in on the historic occasion and while 1997 wasn’t the best vintage, at least the wines came in a nifty presentation case. 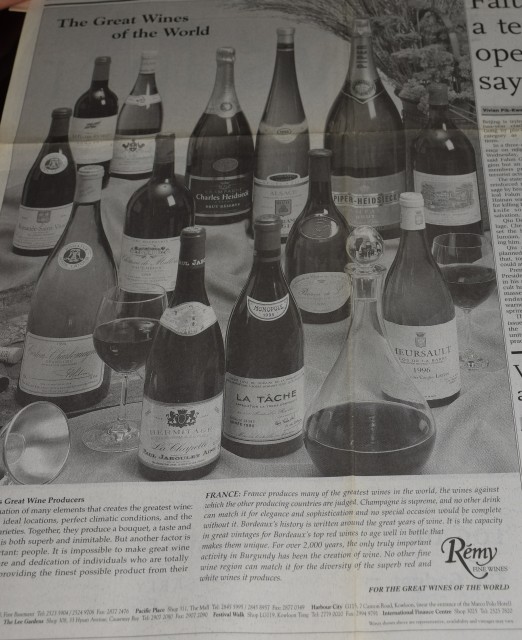 Remy’s growing and formidable portfolio of fine wines were proudly advertised as a full page in the SCMP. 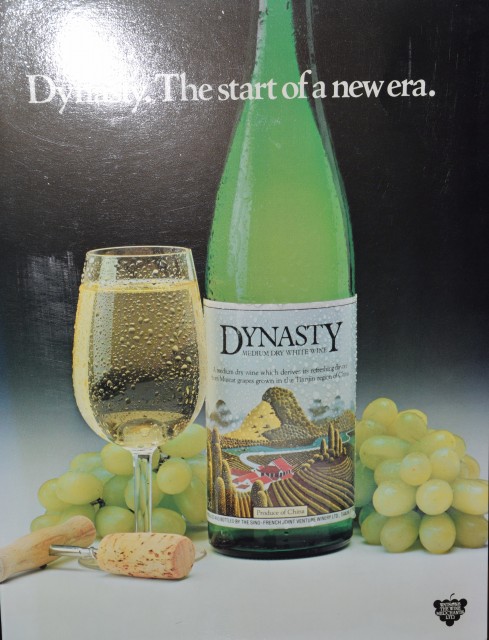 This mouthwatering advert showcased Dynasty Wines, a Chinese wine producer founded in the 1980s that is still going strong today. One of Remy’s top selling wines, Dynasty was as much part of Hong Kong’s burgeoning wine drinking scene as Cognac with ice cubes on restaurant tables.