Mencía the ‘Pinot Noir’ of Spain

Fragrant red variety Mencía is “the Pinot Noir of Spain” due to its delicacy and sensitivity to terroir according to one young winemaker championing the grape.

Speaking to the drinks business during a recent visit to Bierzo, Veronica Ortega, who makes a pair of high quality Mencías in the region, said:

“Mencía is a very delicate grape variety, it’s the Spanish Pinot Noir as its incredibly sensitive to terroir and its environment. Its character changes a lot depending on the soil. The minerality comes through when grown on schist, and those made on sandy soils are more silky and elegant.

“Mencía is a very transparent variety – you get a lot of vintage variation and the styles differ a lot depending on the soil type and altitude of the vines. To me, soils are more important than altitude on the final character of the wine.”

Ortega’s experience at Domaine de la Romanée-Conti inspires her approach in Bierzo, which is also informed by her time working in Crozes-Hermitage in the northern Rhône. 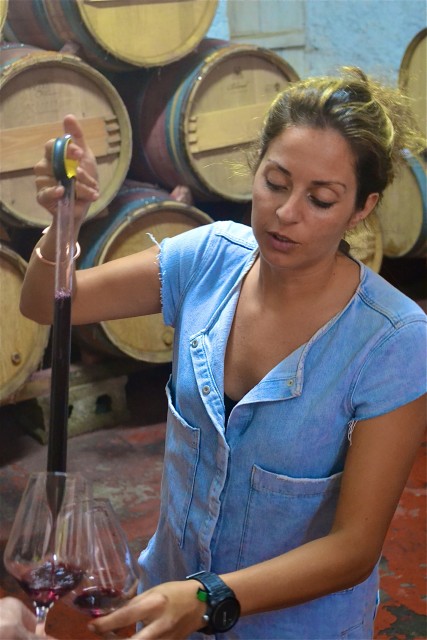 “Most people view Spanish wine as highly concentrated and alcoholic, I want to show that there’s another way. I want to make a Burgundian style of wine.

“While it’s often compared to Pinot, I think there are a lot of similarities with Mencía and Syrah from the northern Rhóne – they share the same wild nature and savoury character – in blind tastings people often get the two confused,” she told db.

A meeting with Bierzo pioneers Raul Perez and Ricardo Perez Palacios spurred Ortega to up sticks from the Rhône and move to the region to make Mencía.

Arriving in 2010, her first few vintages were trials, with her results coming to fruition from 2012 onwards, culminating in her renting her own winery for the first time this year.

Ortega makes two Mencías, the more entry-level Quite that spends eight months in oak, and top drop Roc, made from an 80-year-old schist vineyard in the village of Valtuille de Abajo.

Both wines are made using organic practices and are hand harvested. Ortega is in the process of converting to biodynamics.

She is currently experimenting with ageing a portion of Quite in amphora to lessen the oak influence in the wine. “I don’t want the oak to stand out too much, I want the wine to be able to breathe,” she said.

As for Roc, it’s a wine she’s keen to build to last so Mencía can be taken seriously as a fine wine. “There are a lot of young wines in Bierzo so it was important to me to make a wine built to age as I wanted to do make something will still taste great in 10 years,” she said.

Expanding rapidly, Ortega is doubling her production every year and currently makes 4,500 bottles of Roc and 15,000 bottles of Quite a year, which are sold in the UK via Indigo Wines. She’ll be making a Godello for the first time this year, which is rare in Bierzo.

“There’s a new breed of young winemakers in the region like José García who are keen to retain Mencía’s freshness and elegance and are doing exciting things,” Ortega told db, though admitted securing parcels of land is a struggle.

“People are very closely tied to the land here so it’s hard to get hold of parcels to buy and when you do you have to buy in tiny plots,” she said.

As for her longterm goal, hailing from Jerez, she hopes to make wine down south.

“I’d love to make a Sherry one day as I’m from there but it takes time. It’s my dream to have a small solera,” she said.