Sales of Sherry have all but collapsed in the category’s top five markets over the last decade, with global exports nearly halving since 2002, new graphs show.

The following inforgraphics, which have been compiled by Wine Stats using information from Consejo Regulador de Los Vinos de Jerez, show the rate at which exports of Sherry have sharply declined since 2002. 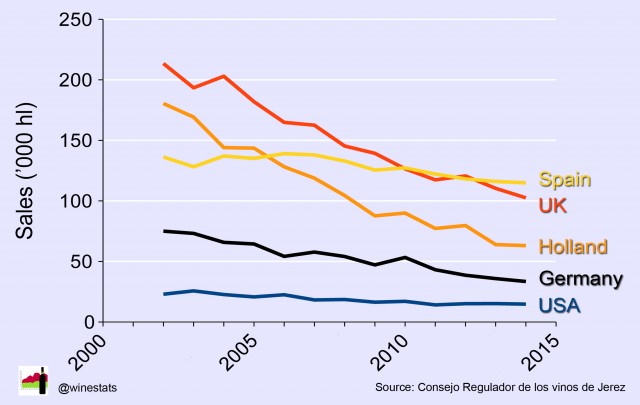 While domestic sales have hovered around 120,000hl since 2002, overall sales including exports have dropped from nearly 700,000hl to around 370,000hl, showing that the taste for Sherry outside Spain is in seemingly irreversible decline.

These figures are despite the fact that Spain is now the biggest wine producing nation in the world, due in part to the growing popularity of Rioja and an improvement in the performance of Cava. Spain exported 24 million hectolitres of wine worldwide in 2014, up from 10 million hectolitres in 2002. 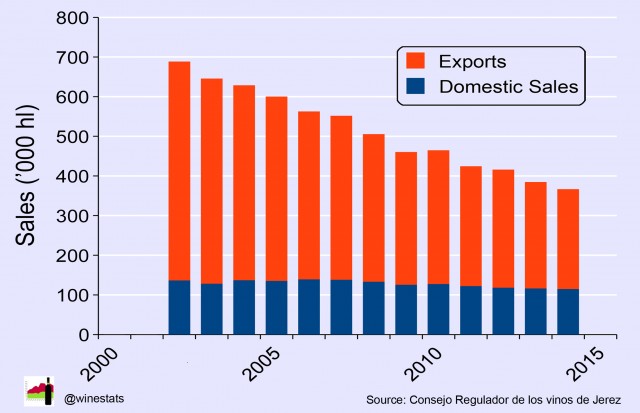 This drop sales is mirrored by the shrinking area under vine in Jerez and the smaller Sherry producing areas, which in total are now only two-thirds of the size they were in 2002, according to the figures from the region’s wine governing body.

Jerez was one of the most affected by the EU grubbing up initiative between 2007 and 2011 that saw surplus vines uprooted to counter increasing wine overproduction in Europe. 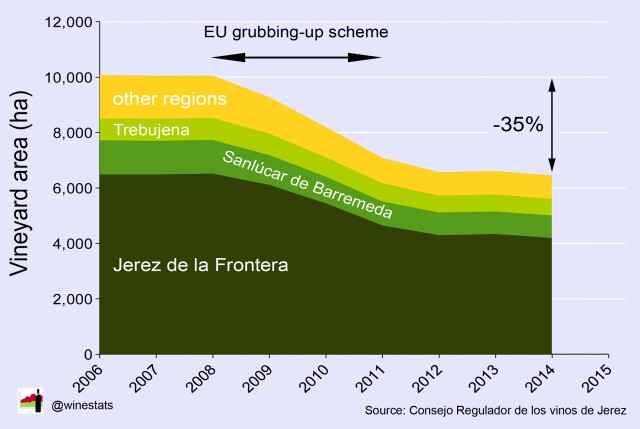 However, as the drinks business reported in 2010, high-end Sherry in the UK is enjoying a renaissance, riding on an on-trade trend that is affecting nearly all other categories – namely that consumers are drinking less overall, but choosing to spend more on frugal amounts of premium brands. Evidence of this has been the explosion of Sherry bars opening in London over the past few years that are still bringing in new customers.

Therefore, while these graphs show that overall consumption is sharply declining, it is important to note that this is most strongly impacting sales of cheaper, entry-level Sherries.