Winemaker Sting sings to his wines

Musician Sting has revealed that he often sings in his wine cellar and likes to think the wines “take it in”, while attending a star-studded bash in Cannes. 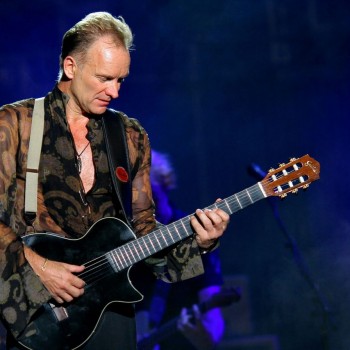 Sting and his wife Trudie Styler have for the past 15 years been producing wines from their Tenuta il Palagio winery in Tuscany. The 16th century,  350-hectare estate was purchased by the couple in 1999 with the entire estate now run biodynamically.

The couple produce four Tuscan reds, all influenced by Sting’s musical background, named Sister Moon, When We Dance and Casino Delle Wie, whose name translates as “little house by the roads”.

The latest addition to the lineup is Message in a Bottle, a Toscana IGT blend of Sangiovese, Syrah and Merlot aged for 12 months in French oak barrels.

Speaking to MailOnline at Cannes Lions, Sting said his greatest pleasure was giving bottles away to friends who “actually know about wine”.

“Of course they look sceptical when we tell them about it, but it’s nice to see that scepticism shrink when they taste and realise it really is a good wine – that’s a great pleasure”, he said.

Message in a Bottle was served by at a dinner party held for a host of celebrities at the MailOnline yacht party on Tuesday evening, prepared by top chef Raymond Blanc. Sting played an intimate gig on board to a star-studded crowd that included Will.i.Am, Freddie Flintoff and Louise and Jamie Redknapp.

Despite the wine’s A-list credentials, the couple are keen that their wines remain accessible to the public, with some retailing at £11.99.

Describing themselves as “enthusiastic amateurs”, the couple have a team of professionals to oversee their winemaking, led by Paolo Caciorgna. However Sting hopes his musical background has played a part in making his wines.

Vintage Roots is the sole importer of Sting’s wines in the UK, with the range starting at £11.99 for the ‘When We Dance’ Chianti.