Symington Family Estates has planted an experimental vineyard in the hottest part of the Douro to uncover which native grapes are best-suited to the extreme conditions of the Portuguese region.

The new plot covers 2.25 hectares in the Douro Superior and contains 53 different vitis vinifera varieties – 29 red and 24 white – which were planted just over one year ago. The majority are indigenous grapes, but also included are a range of international varieties.

The project was the brainchild of Charles Symington, head of viticulture at Symington Family Estates, the largest Port producer in the Douro, and also the biggest landholder with a little over 1,000ha in the region.

Speaking last month to the drinks business, which was the first publication to be introduced to the project, Charles said that he has wanted to create an experimental vineyard in the Douro ever since completing his MSc in oenology and viticulture at the University of La Rioja Logroño back in 1992. While he began a vineyard research project in the Pinhão Valley’s Quinta da Cavadinha in 1995, this was focused on the five main red grapes in the region (mentioned below).

However, the new experiment is a significant development of this initial study, fueled by his – and others’ – limited understanding of which varieties were best suited to the region, and why.

But where should the Symingtons plant such an experimental vineyard? For that, the family-owned company needed a place that was relatively homogenous, as well as climatically extreme, to ensure that all the varieties were subject to the same, intensely hot Douro conditions. Such a site had in fact come with the acquisition of Cockburn’s assets, which the Symingtons bought in 2006, before taking over the brand too in late 2010.

Called Quinta do Ataíde, the experimental plot is within an 81ha planting in the Douro Superior, where Cockburn’s pioneering viticulturist, Miguel Corte Real had undertaken the first clonal selection of Touriga Nacional as many as 35 years ago (and was using the site for growing grapes for Port, whereas today the area is mostly used for table wine production). Importantly, the estate is gently undulating – quite unlike the Douro valleys with their steep gradients and terraced slopes – eliminating the distorting influence of altitude on the vines. It is also warmer than in the valley, on average around 2°C hotter, while it is drier too, with annual rainfall averaging under 400mm. Nevertheless, the soils are the same schistous rock as the main Douro Valley, with an almost equally low content of organic matter: less than 2%.

The management of the entire site is slightly different: not only is it 100% organic, but it is also fully irrigated – with the Symingtons applying the equivalent of an extra 200-250mm of rainfall per year (still less than the wettest and lowest part of the Douro, the Baixa – or lower – Corgo, where around 1,000mm of precipitation falls annually). What is interesting is how dry the area is. The Symington’s new head of viticulture R&D, Fernando Alves, uses a measure called Vapour Pressure Deficit – essentially the air’s ability to draw water from a plant – to highlight the hot and dry nature of the environment. “If it is 5 Kilopascals (kPa) in the Médoc, and the Douro Valley is around 6-7kPa, in Ataíde it is 9kPa, so the vapour pressure deficit, or the dryness of the air, is nearly double that in the Médoc,” he says.

Importantly, the 53 varieties in the experimental vineyard are being subjected to every type of measurement, whether it’s the water pressure in the plant, moisture content in the soil, or vigour of the vine – with the latter monitored using GIS.

Furthermore, a similar vine library has been planted in the heart of the Douro’s best site for Port production, the Cima Corgo, at the Symingtons’ Quinta do Bomfim. This will allow for comparisons with the results from Ataíde, deep within the more arid Douro Superior.

Although Quinta de Ataíde is not home to Portugal’s only library collection of native grapes – the Alentejo’s Esporao estate has a comprehensive planting of indigenous varieties, while there is a national ampelographic collection in DOC Torres Vedras near Lisbon – head of Symington Family Estates Paul Symington assures that “nobody had done something on this scale, and in the Douro”.

Furthermore, the Symington experimental plot includes international grapes from Chardonnay to Syrah for the sake of comparison. As Paul explains, “Varieties such as these are already widely studied, so we can compare existing results with our findings.” Then there’s the fact that the experimental vineyard incorporates the same grapes grown on different rootstocks, as well as different clones of each variety.

However, despite all the variables in the Douro, such as the rootstock used, or clonal selection, as well as the training system employed, Fernando stresses that it is the choice of variety that makes the biggest difference when it comes to the vine’s response to variations in soil pH, water availability or microclimate.

He also states that this experimental vineyard is not only designed to help Symington Family Estates select the best grapes for its range of sites along the Douro, but also to share the findings with the region as a whole.

And the aim of that? To enhance the diversity of varieties in the region – because this will add to complexity in the wines, and increase the area’s resistance to the threat of a warming climate in a place that’s already at the limits of heat and dryness for vine growing.

But the results will have even wider significance. With many parts of the wine producing world suffering from greater restrictions on their water supply and extreme heat, the identification of obscure grapes that can produce balanced berries in almost desert-like conditions is of immense global value.

On the following page you can see a full list of the grape varieties planted in the Symington experimental vineyard. 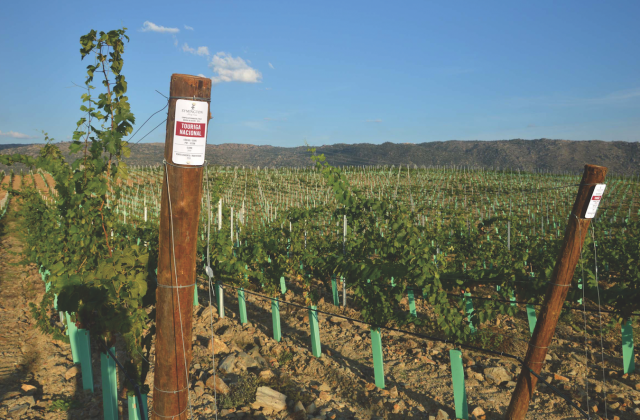