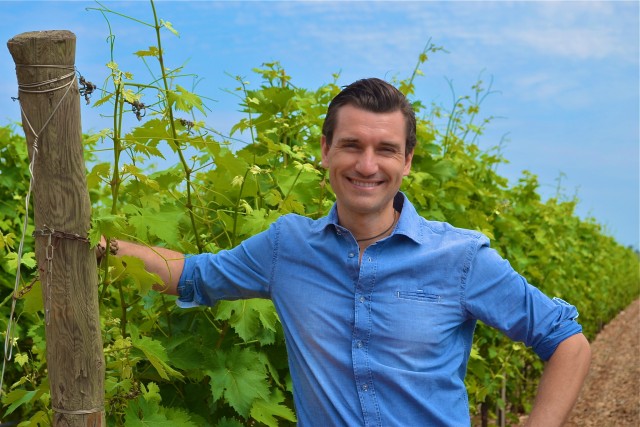 db was lucky enough to be invited to Puglia, the heel in Italy’s boot bordering the Adriatic and Ionian Sea, to take part in Zonin’s Gastronomy Experience, which recently won The Drinks Business award for its Contribution to Wine and Spirits Tourism. The trip was hosted by the delightful Lorenzo Zonin, wine ambassador for Zonin and owner and winemaker at Podere San Crisoforo in Tuscany. 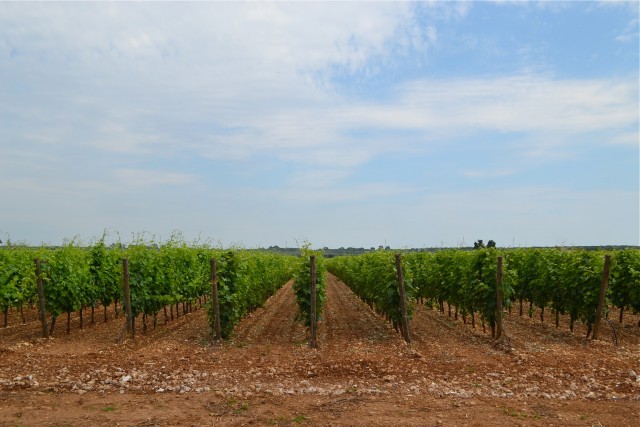 Our first stop was to Zonin’s Puglian estate Masseria Altemura in the town of Torre Santa Susanna in Salento where 150 of its 300 hectares are planted with Primitivo, Negro Amaro, Aglianico, Fiano and Falanghina vines on mineral rich, rocky red soils dotted with crushed limestone. 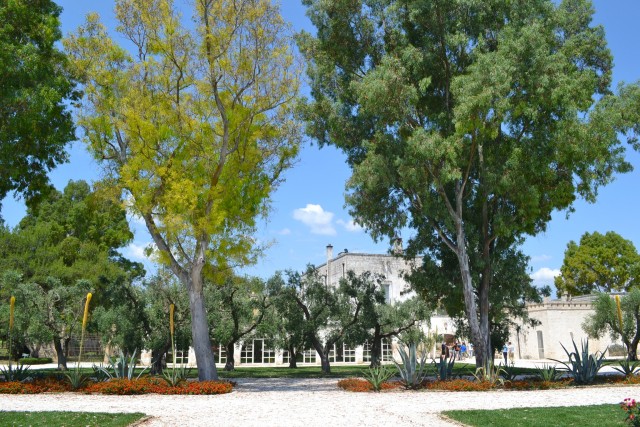 In addition to grapes, the estate is home to 40 hectares of olive trees, allowing Zonin to produce a small amount of delicious extra virgin olive oil, which we enjoyed a lot of during the trip. Built using the region’s famous tufa limestone, the masseria boasts a small chapel prettified with 16th century frescoes. 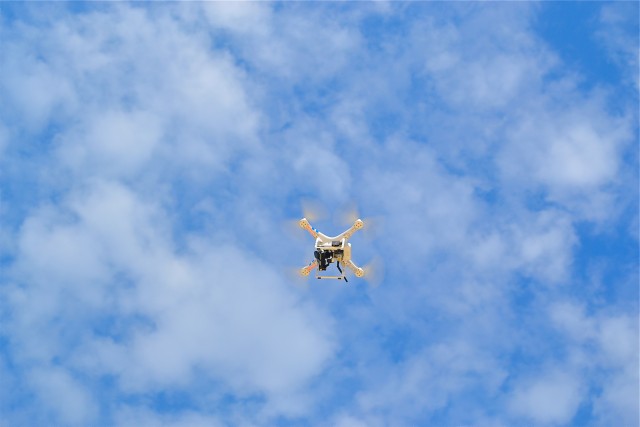 While touring the estate, we spotted this white drone buzzing about, which we thought might have been used to monitor the health of the vineyards, but in fact took to the skies to film our visit. 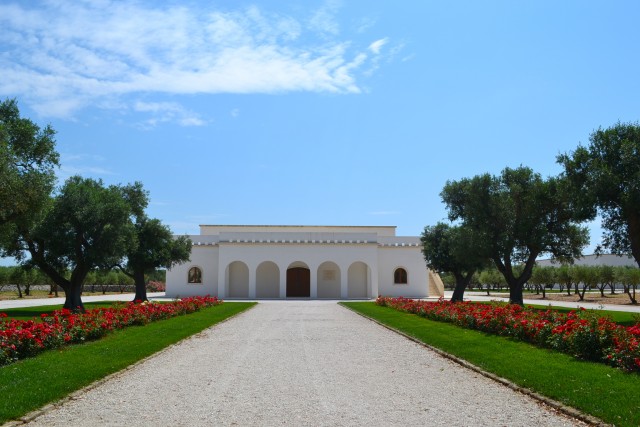 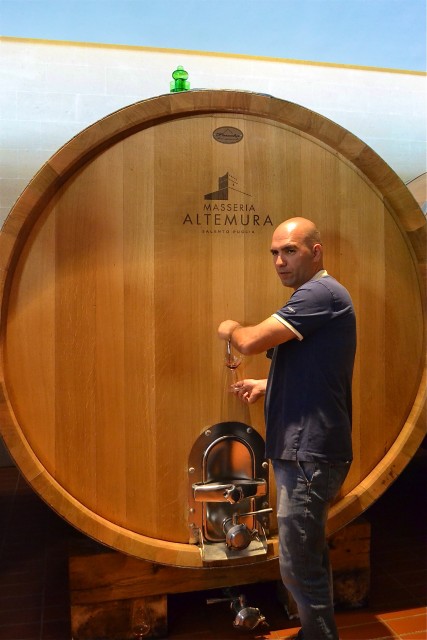 Inside, winemaker Antonio Cavallo treated us to a tasting of Primitivo straight from the botti 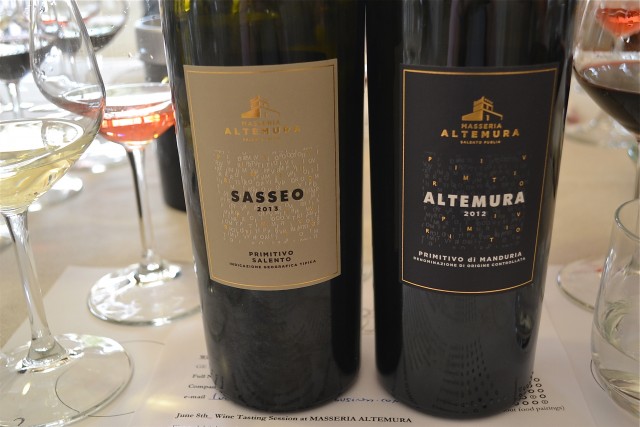 Over lunch we got to taste through the Masseria Altemura range, including top drops Sasseo and Altemura. Both crafted from 100% Primitivo, the former is an IGT made in an international style with fully ripened grapes in a bid to express the intensity and sunshine of the region. Altemura meanwhile serves as an expression of the Torre de Santa Susanna soils with notes of violets, blackberries, chocolate and balsamic. 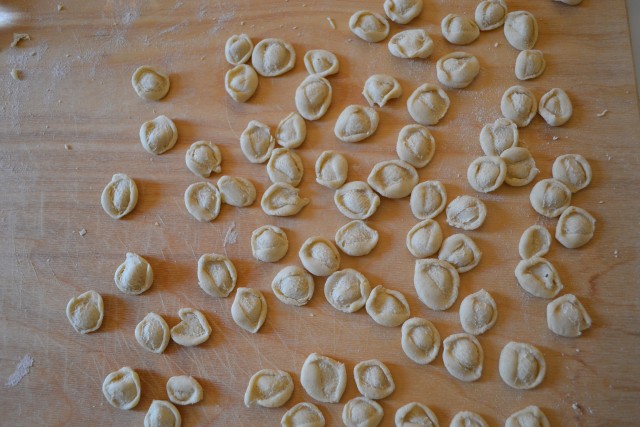 After lunch it was time for a spot of pasta making. Our chosen shape was orecchiette, which means “little ears” in Italian and is enjoyed widely in Puglia. 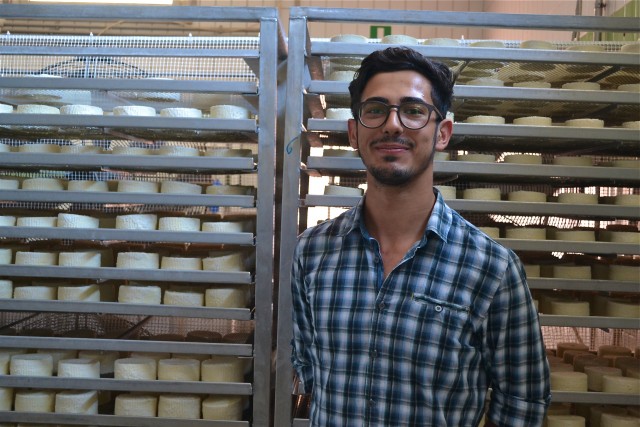 Our next stop was to cheese maker Casearia del Levante, where we were greeted by the affable young Francesco Gallone, who talked us through the process. 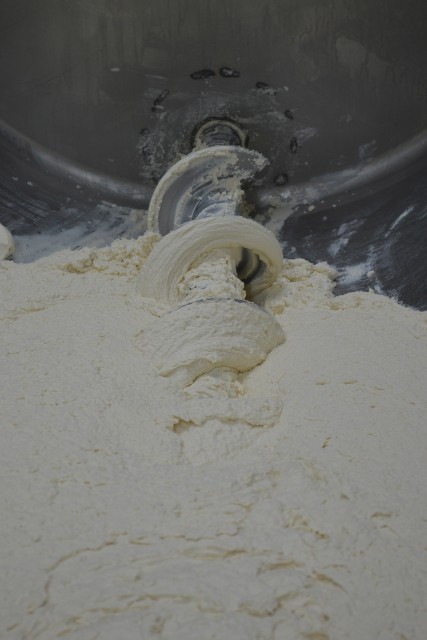 Among the company’s specialities are a ricotta aged for a year (pictured): a punchy, tangy, turbo charged take on ricotta, and ricotta smoked with olive wood, which had an appealing peaty character like an Islay single malt. 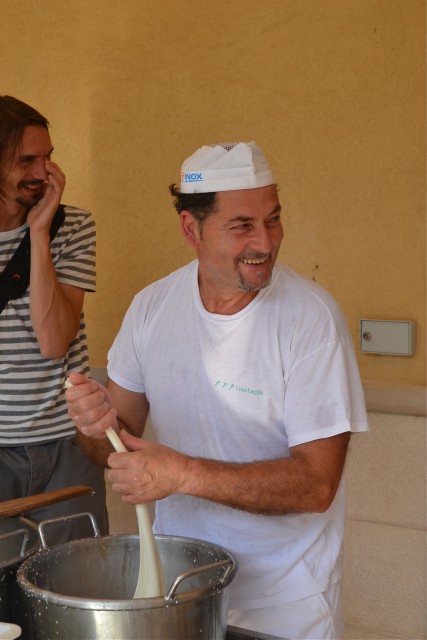 We got to see the mozzarella making in action – this nimble fingered guy weaved the cheese into everything from balloons to baby elephants. 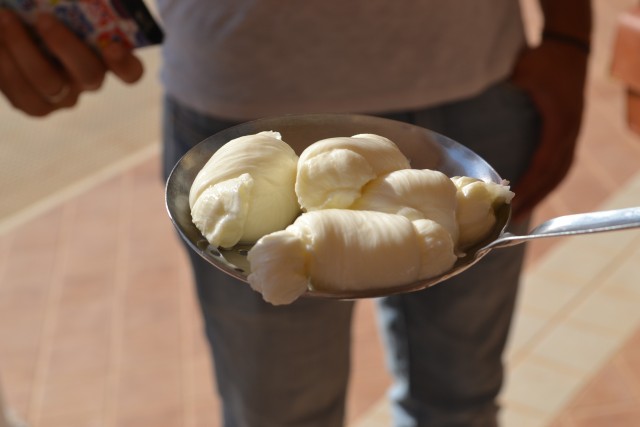 It tasted as good as it looks – creamy and far fuller in flavour than a lot of the mozzarellas you find in UK supermarkets. 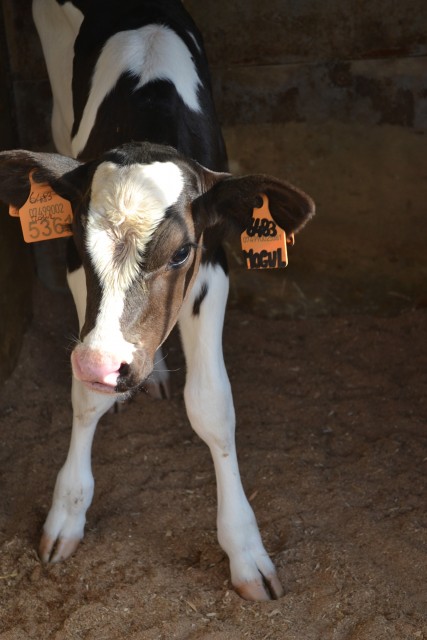 After the cheese tasting we were introduced to the calves that would one day help produce the cheese. Some, like Mogul here, were just a week old. 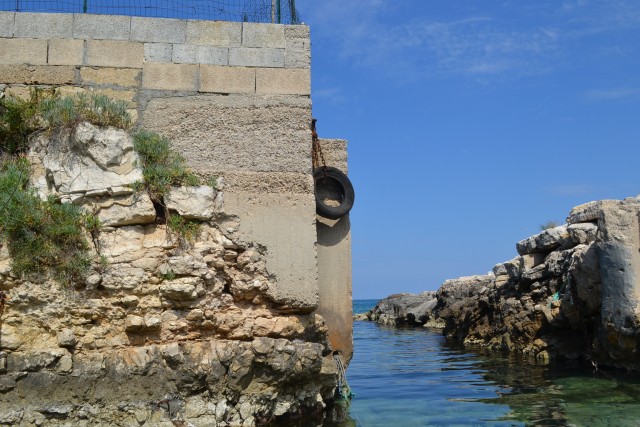 With the sun already high in the sky, we began day two with a fishing trip in Gallipoli, which shares a name with the famous Turkish town and means “beautiful town” in Greek; a name it more than lived up to. 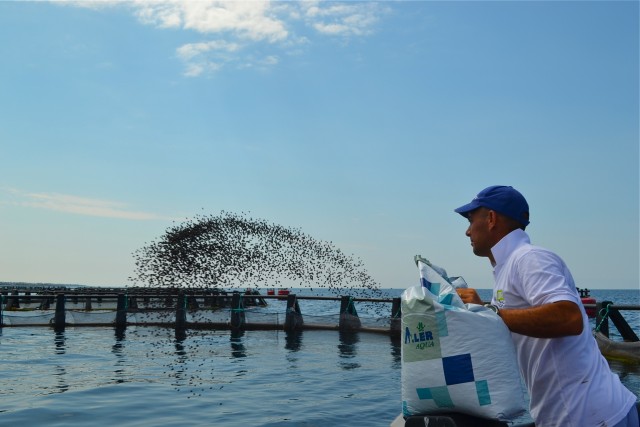 We were taken out on a small fishing boat by Reho Mare, a local open water fishing company run by Aldo Maria Reho, who catches fish from inside large round contained nets in the middle of the ocean. 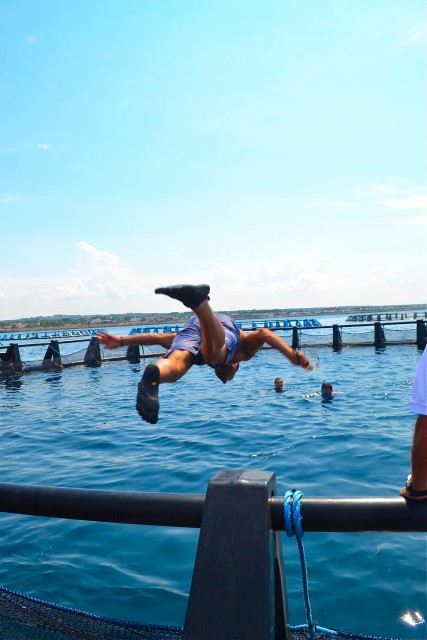 Never one to shy away from the action, Zonin’s prestige accounts manager Eduardo Caballero couldn’t wait to dive in to get a better look at the fish. 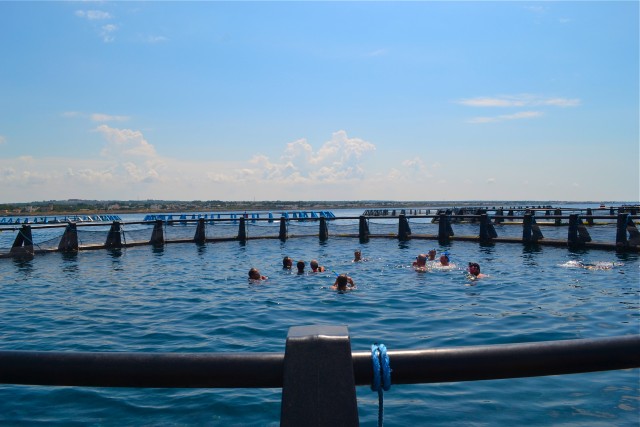 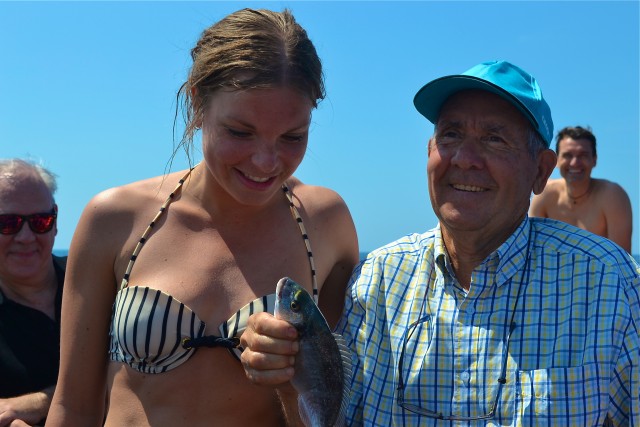 Among the fishing crew was the charming, 83-year-old Genuino, who was on the eve of celebrating his diamond wedding anniversary. During the trip, he taught us all how to fish – Swedish sommelier Frida Hansson from Eriks Gondolen restaurant in Stockholm was delighted with her catch… 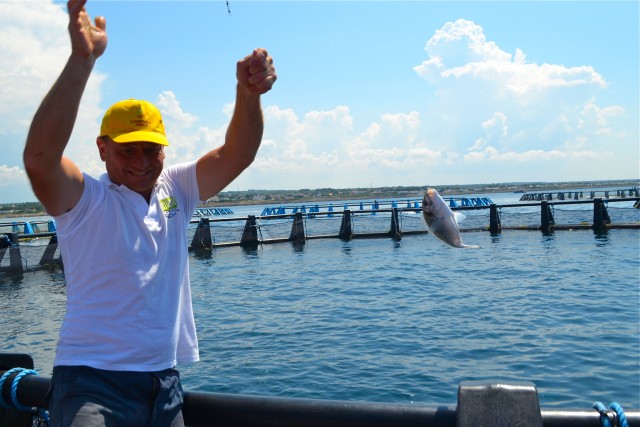 as was this guy 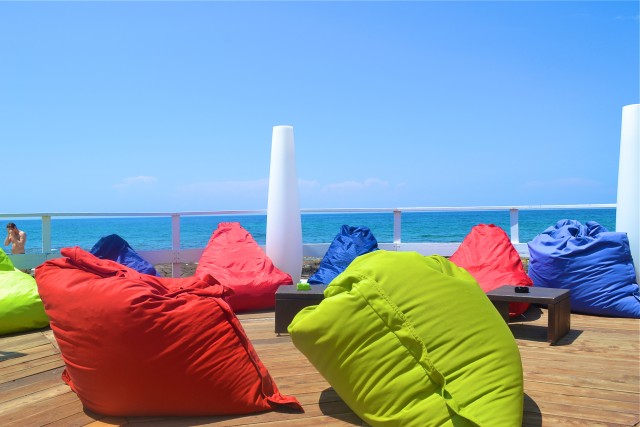 After a successful morning of fishing we headed to this serene spot to unwind with a glass of Zonin Prestige 1821 Prosecco followed by an abundant lunch that included smoked sea bream and an entire roasted sea bass each followed by lashings of gelato and limoncello. 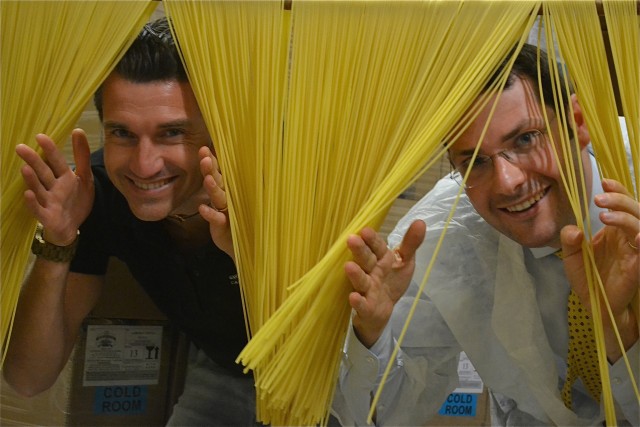 Our final stop was to renowned pasta maker Benedetto Cavalieri, founded in 1918, where we learnt how artisan pasta is made – as it turns out in 35-degree humid heat. The family firm is run by third generation Benedetto Cavalieri and his son Andrea (right), who gave us a tour of the site. Its star product is spaghettoni pasta, which takes 16 minutes to cook due to its thickness but tastes like a dream with lemon, parmesan, extra virgin olive oil and parsley.