Drinking wine does make you appear more attractive, but more than one glass will send you spiralling back to mediocrity, according to a recent study. 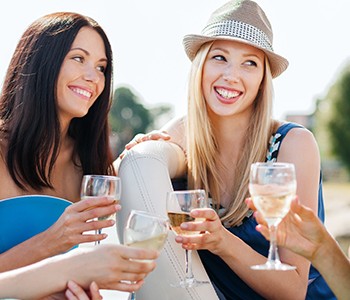 As reported by Live Science, a study carried out by Bristol University concluded that a glass of wine can help impress while on a date, changing your facial features to become seemingly more attractive.

The study, entitled Increased Facial Attractiveness Following Moderate, but not High, Alcohol Consumption, saw 40 students volunteer to have a drink with researchers photographing their faces three times: when sober, after drinking one glass of wine, and after drinking a second alcoholic drink, to see how their appearance had changed. A separate group of students then rated the attractiveness of each headshot.

The study found that those who had consumed one drink appeared more attractive to the majority of would-be suitors than those who had opted for a second drink, or were completely sober.

Munafò theorised that after one drink participants’ faces showed greater pupil dilation, commonly perceived as a positive trait, or that increased muscle relaxation made them look more attractive.

Another explanation could be that those who had consumed a small amount of alcohol had a “slightly rosier complexion”.

“Rosiness is attractive because it characterizes good physical health characteristics”, said Munafò. “That obviously doesn’t mean that alcohol is healthy,” he said. “What it means is that alcohol is sort of hijacking that mechanism, or promoting the aspects of facial features that we regard as attractive for other reasons.”

Publishing their research in the journal of Alcohol and Alcoholism, the report authors concluded: “In addition to perceiving others as more attractive, a mildly intoxicated alcohol consumer may also be perceived as more attractive by others.”