Merchants’ prayers have been answered with Latour’s well-pitched release for its 2003 vintage, which may set the tone for Bordeaux’s 2014 campaign

At the equivalent of £5,950 a case for the 2003 vintage, Château Latour 2003 is the toast of the trade. “It’s a very, very punchy price, and they pitched it absolutely right,” said a clearly delighted Gary Boom, MD of Bordeaux Index. “They released the price yesterday and we sold out instantly.”

The 100 point wine had been trading at around £6,500 a case on the open market, and there were fears Latour would have pumped up the price for the cachet of coming direct from the château’s cellars. Although “ex-château’ is such an overused term, it doesn’t mean so much these days,” said Berry Bros & Rudd’s Bordeaux buyer, Max Lalondrelle.

For Boom, the message to the château-owners as they ponder the price of their 2014 in the forthcoming en primeur campaign, is clear: “Don’t squeeze the last cent out of the price. If you pitch it at the right price and leave something in it for the trade, we’ll sell it.”

It is a message Boom intends to hammer home at Bordeaux’s en primeur tasting in a couple of weeks.

Lalondrelle was doubtful that Latour’s release would “send out a huge signal because it’s a very small volume of 1,000 cases,” but Boom disagreed. “I think it does say 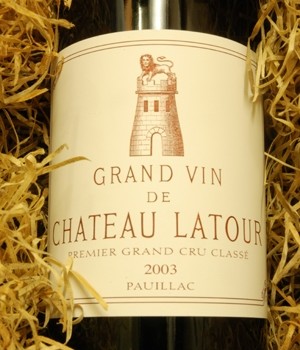 quite a lot, when Bordeaux hears how fast it sold out and its huge demand. It will set the tone.”

He urged Château-owners to look at their last year’s release prices and offer a 10% discount. With a better vintage in the offing and the benefit of the weak Euro, it would certainly help reignite the trade’s passion for Bordeaux.

We will soon find out. In the meantime the 3,000 cases of Fort de la Tour 2008, the château’s second wine released at the same time, have been somewhat buried in the excitement. For those interested the current market price is now £1,200 a case.