It is hardly “hold the front page” news, but last month’s dip in the Liv-ex 100 was a little disappointing after such a strong January. 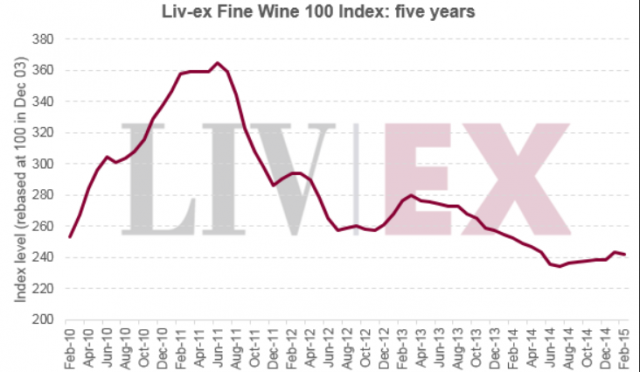 It was not quite “two steps up, two steps down”, on Liv-ex 100, as the slight dip in February of 0.4% was only a fifth of the 1.9% jump in January – the index’s biggest monthly rise in two years. Perhaps it demonstrates a skittish mood among merchants as the 2014 campaign draws closer, as well as the fact February saw no bounce from the Chinese New Year unlike the previous two months.

Interestingly, of the top five performers, the three from Bordeaux were all from 2005 – a vintage that is looking better all the time, as recent tastings have confirmed.

For traders on Liv-ex there is the salivating prospect of more 100 point wines to come with a “comprehensive 10-year retrospective on the incredible 2005 Bordeaux vintage” promised on the eRobertParker bulletin board.

Liv-ex director, Anthony Maxwell stressed that, while any dip is disappointing, levels of activity are high. “Trade on the exchange in February was up 7% on February 2014, and transactions by 25% over the same period,” he said, crediting the relative weakness of the Euro as one factor.

Although there is a buzz about the 2005 vintage, he did not see it in any way eclipsing the forthcoming campaign. “2014 will be its own beast, and with no Parker there, people will have to write their own tasting notes and form their own opinions, especially on price.”