As Robert Parker steps back from Bordeaux en primeur tastings, one fine wine fund has highlighted a number of signs that his overall influence is on the wane.

Such is Parker’s present effect on the Bordeaux market that The Wine Investment Fund uses his scores as one of three pillars (along with the “brand value” of an individual château and reputation of the vintage) by which it measures the relative value of one wine against another.

Presenting evidence of Parker’s significant impact on the Bordeaux secondary market, TWIF cited the example of Smith Haut Lafitte 2009, which traded for £600-700 per case until February 2012, when the critic upgraded his rating from 96-98+ to a “perfect” 100 points. Almost immediately the wine shot up in value by 150% on Liv-ex. 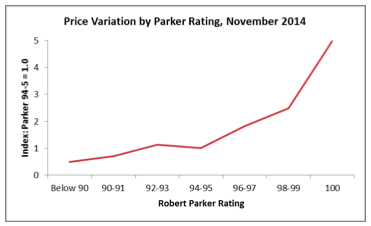 In addition to flagging up how an upgraded score from Parker can result in an increase in the price of the wine, TWIF data indicated that the increase becomes much sharper at the highest end of the points spectrum. (see chart, right)

However, the company noted a diminished impact of Parker points on prices in November 2014 compared to November 2009, tracing a shift that shows “less of a premium for top scores, and less of a discount for lower scores, than there was five years previously.”

In addition to this development, TWIF tracked a decline over the same period in the premium commanded by Bordeaux wines holding a 100-point Parker score. It found that the average price of a top-rated wine had fallen from 18 times that of a wine scored below 90 points in November 2009 to around 12 times higher by November 2014. (see chart, below left) 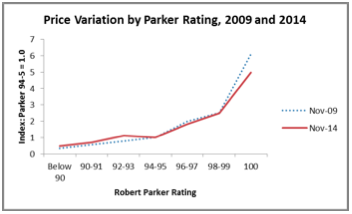 “In fact,” TWIF commented, “looking across the whole range of ratings, there is a fall of approximately 25% on average in the extent to which wines with higher Parker ratings achieve higher prices. This appears to be significant enough to say that his influence has been reducing.”

While stressing that its interest as an investor lies in observing rather than explaining these trends, the company nevertheless suggested: “Perhaps this reflects the market anticipating his retirement, or other factors could be at play.”

Despite these signs that his impact is on the wane, the company maintained that Parker “still remains the dominant influence on prices” for the Bordeaux market.

Highlighting the unusual nature of this situation, TWIF compared it to having just one rating agency or equity analyst in the financial world. “In any situation where a single opinion is dominant it is likely that there will be a high degree of self-reinforcement, it observed.

However, here TWIF highlighted the far more subjective nature of wine quality than any example from the financial market. “Alternative views may emerge, but it will be impossible to prove that the dominant critic was ever wrong,” it remarked. “Thus the self-reinforcement in prices can have a much higher degree of persistency than in financial markets.”

Parker himself recently acknowledged the role his scores play in pushing up prices, although he laid most of the blame for recent rises at the door of Bordeaux châteaux.