A wine investment firm has tracked the varied fortunes of 2005 Bordeaux and, with Robert Parker set to revisit the vintage, considers the impact of any upward re-evaluation. 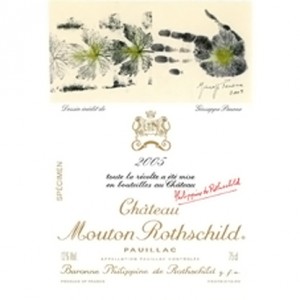 According to London-based firm Cru Wine Investment, which bases its valuations on the Eleanor Independent Wine Index, a Bordeaux-focused system that the company uses in tandem with Liv-ex data, 85.4% of wines from the 2005 vintage are currently trading for above their en primeur release price.

However the last six months have seen a single digit percentage average decline for the 2005 vintage in each tier of the Left Bank classed growth categories, with the exception of the first growths which remained flat thanks to the 23% rise for Mouton Rothschild following its upward reappraisal by Parker.

Over the near-decade since 2005 en primeur prices were released, the biggest price leap has been seen by the second wines of Médoc first growths, especially Carruades de Lafite, which has made early investors a 469% return.

Noting the “brand spill-over effect” driving this performance, CWI managing director Gregory Swartberg told the drinks business: “a buyer is essentially acquiring a wine from a famous châteaux but for a large discount.” As a result, he remarked: “The demand for these wines is still high in Asia. As long as these châteaux price their second wines right, the demand will be around the same level.” 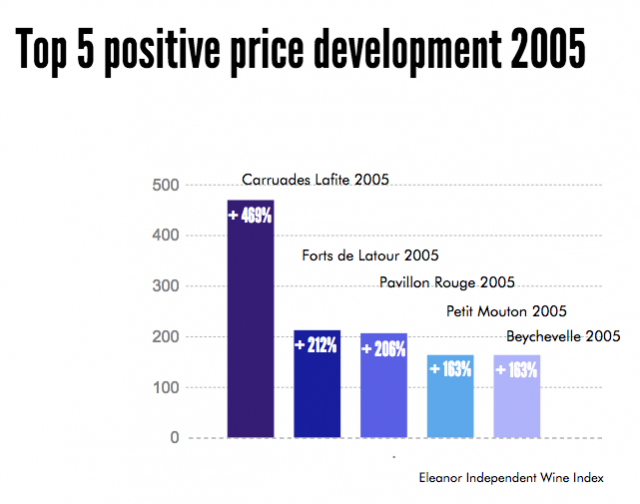 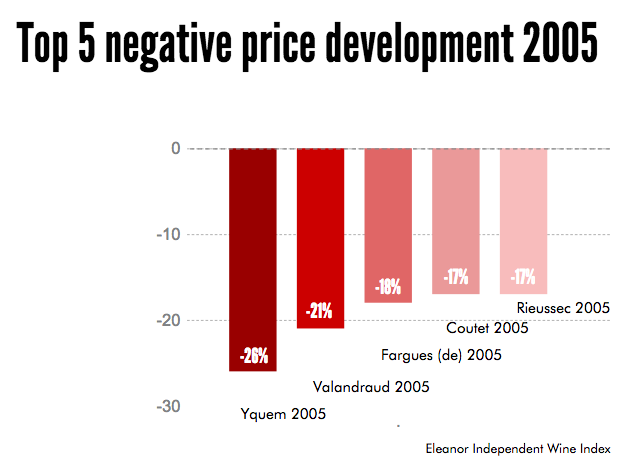 By contrast, despite sharing in the highly acclaimed quality seen in the rest of Bordeaux this year, Sauternes prices show some of the biggest declines. According CWI, even the region’s star estate Château d’Yquem has experienced a price slide of -26% for this vintage since en primeur.

Overall the Sauternes appellation has seen a decrease of -7.3%, while Pauillac’s first growth concentration has led to a 99% price rise on original en primeur levels, with increases for other classed growth appellations growing between 50% for St Emilion and 72% for Margaux.

Nevertheless, flagging up the six-month data picture, Swartberg remarked: “These numbers do not quite support the overall idea that Bordeaux 2005 is heading back into growth.” However, he echoed other fine wine commentators in predicting that further upward re-evaluations from Parker would “definitely have a positive impact” on the market.

Alongside Mouton’s 2005 example Swartberg cited Parker’s earlier 100 point upgrade of Lafite 2003 once it was bottled, a move which, he noted, “fuelled demand for it on the market.”

However, he warned, “We don’t believe this projection applies for all ‘05 classified growths.” Noting that wines from lower classifications “tend to receive lower scores,” Swartberg observed: “a rise from 90 to 92 has a lower impact on value than an increase from 98 to 100. Although if one of those third growths receives a perfect score than all traders will have their eyes and hands on it.”

As for first growths such as Margaux and Haut Brion, which are already sitting high on 98 points, Swartberg suggested: “a 100-point score will have a large impact but an increase of one point will have less of an impact.”

So would the anticipated upward re-appraisal by Parker of the 2005 Bordeaux be enough to halt CWI’s picture of this vintage’s price decline over the last six months?

In Swartberg’s view, “this depends mainly on two things: the upcoming primeur campaign and the strength of the [2005] scores.” Nevertheless he concluded: “The re-evaluation definitely causes an increase in buyers’ attention on the ‘05 vintage.”