A tasting panel hoping for a rare treat when opening a 150-year-old bottle of wine that had been salvaged from a Civil War shipwreck were left sorely disappointed. 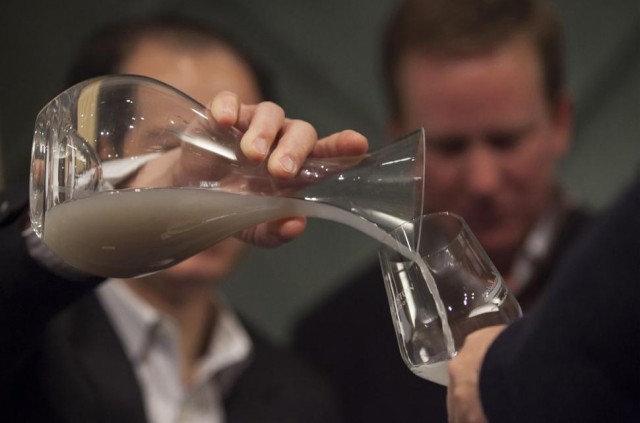 The bottle was one of five discovered on the wreckage of the Mary-Celestia in 2011. The ship sank off Bermuda in 1864 on her way to try and break the Union blockade of the Confederacy.

Fifty people bought tickets to watch a panel, including Napa-based master sommeliers Larry Stone and Paul Roberts, open a bottle at the Charleston Wine and Food festival at an event, rather grandiosely, titled: “From Deep Below: A Wine Event 150 Years in the Making”.

“I’ve had shipwreck wines before,” said Roberts, “they can be great.”

However, apparently to laughter from the audience, the panel were quickly reaching for the spittoons as the milky-grey liquid turned out to taste of little more than saltwater.

Despite some attempts to say the nose contained “hints of citrus”, Pierre Louis Teissedre, a wine chemist from the University of Bordeaux, summed it up rather more truthfully as a mix of “camphor, stagnant water, hydrocarbons, turpentine and sulphur”.

His analysis showed that it was also 37% alcohol, so it’s possible it was not a wine at all and was in fact once a brandy or other spirit.

If it was ever a wine, then Madeira would be the most obvious choice. Only a fortified wine could have anywhere near that level of alcohol and Madeira has a long-established history with the sea and the American south.

Shipwrecked wines can indeed be drinkable as proved by the Champagne discovered in the Baltic in 2010, 79 bottles of which are still judged “drinkable”, likewise two six-bottle lots of salvaged Gruaud-Larose from the same period, 1865 or 1869, sold for over £5,000 apiece at auction in 2013.

Meanwhile, a Belgian and Finnish team set about recreating the beer found alongside the Baltic Champagne and launched their version last year.