There are reasons to be cheerful studying the Liv-ex Bordeaux 500 since July, and it’s not all down to Robert Parker.

There is a discernible positive vibe at Liv-ex, “tempered with feelings that we’ve seen January bounces and Chinese New Year bounces before,” Liv-ex director Justin Gibbs told drinks business. “They turned out to be false dawns. We’ve also got the rapidly approaching 2014 campaign, and there’s not a huge amount of faith that the Bordelais are going to price it right, on the basis they’ve priced it wrong for the last four years on the trot.”

Still, if you want a shot of optimism you could do worse than study the top 20 performers on the Liv-ex Bordeaux 500 index since July.

“Each of them are up by plus 15%, and that is not a market that’s unsure of itself,” said Gibbs. “People would consider that a bull market.” Those fortunate enough to buy Château Haut Bailly 2009 six months ago would have seen a hefty 62.4% rise in value, the result of Robert Parker’s decision to upgrade its score to 100 points in November.

Of course that and similar recent upgrades for Château Montrose and Château Mouton Rothschild would have been hard to predict back in July.

However even if you discount those three, Gibbs feels the Bordeaux 500 is moving in the right direction. “Maybe it is wishful thinking, but 60% of the wines have been in positive territory over the last seven months.” 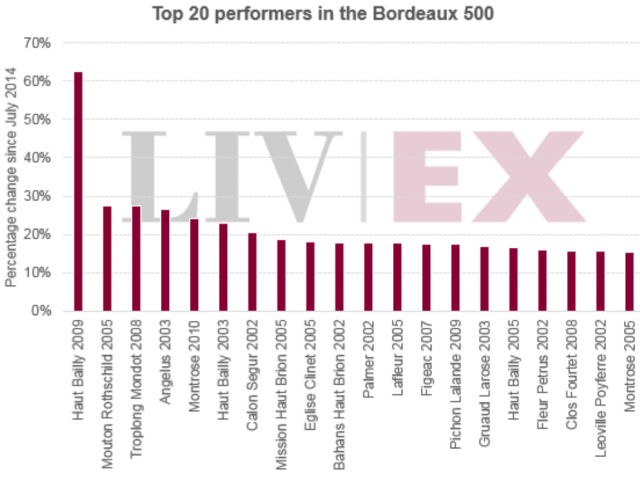