From Ron Burgundy’s love of “Scotchy Scotch Scotch” to Bond’s dalliance with The Macallan, behind many a leading man is a strong malt whisky, as this round up proves. 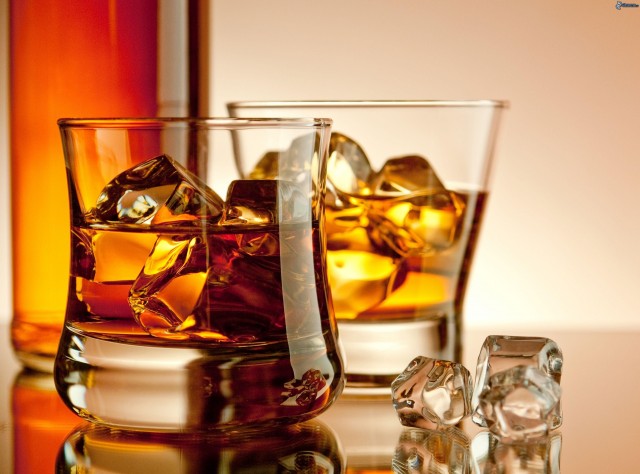 For whisky enthusiasts, there is a certain geeky thrill in spotting a tumbler or decanter of whisky in a film and being able to decipher its brand, age and malt. Sometimes it is obvious, other sightings require further investigation, but all are a welcome tip of the hat to the greatness of Scotch.

Whisky has played a supporting role to many legends of the silver screen over the years. While offering a lucrative shot at publicity for its makers, the prominence of whisky in big budget films is an endorsement of its popularity and, in many cases, its enduring cool – a ticket to sophistication if you will. We have racked our brains to come up with a handful of our favourite whisky-themed scenes in recent years.

Lost in Translation tells the story of Bob Harris, played by Bill Murray, an ageing American actor who travels to Tokyo to film an advertisement for Suntory’s 17-year-old Hibiki whisky in return for $2 million. While in Tokyo, Harris strikes up an unlikely friendship with a recent college graduate named Charlotte, played by Scarlett Johansson, after a chance meeting in a Tokyo hotel. This humorous clip typifies how Harris is literally “lost in translation”, as he films the advert with a Japanese director.

Anyone growing up in the 90s is unlikely to have missed the hype over American Pie, the 18-rated teen comedy that spawned a total of seven sequels and spin offs. Among the film’s central characters, who are desperate to lose their virginity, is Paul Finch who is portrayed as the “sophisticated” member of the group preferring a fine single malt over beer and with a liking for older women, as this memorable encounter with Stifler’s mum proves.

“Aged eighteen years. The way I like it.” – Stifler’s mom

The irrepressible news anchorman Ron Burgundy loves Scotch, so much so that he released his own brand. From the imagination of Will Ferrell, Anchorman: The Legend of Ron Burgundy, stormed the box office in 2004 gaining cult status thanks to its quotable dialogue, plentiful cameos and a legendary street fight between rival news teams based on West Side Story. Burgundy is often seen holding a tumbler of his favourite “Scotch. Scotchy, Scotch, Scotch”. 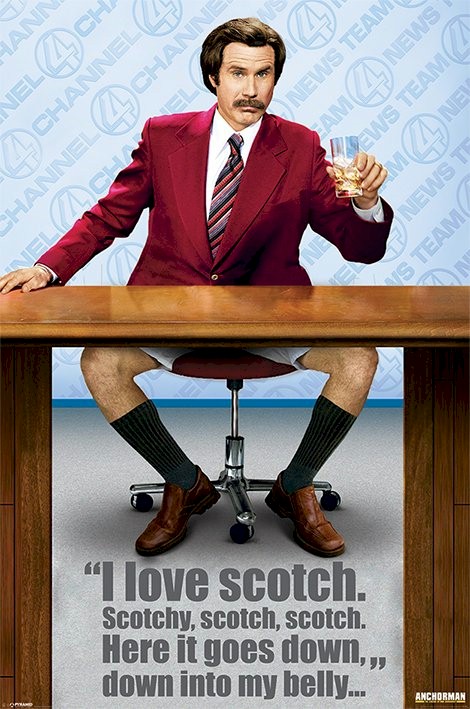 While a glass of 18-year-old Scotch might sound like an enticing prospect, its appeal somewhat weakens when it is presented to you at 8.15 in the morning, some might agree. Knowing he is in line for a promotion Nick Hendricks, played by Jason Bateman, is dutifully chugs a full glass of the nectar goaded by his boss, played by Kevin Spacey, in this clip from the 2011 comedy Horrible Bosses.

Whisky Galore! (released in the US as Tight Little Island) is a 1949 Ealing comedy based on the novel Whisky Galore by Compton MacKenzie. Both are based on the real life 1941 shipwreck of the S.S. Politician near the island of Eriskay, and the subsequent snatching of its cargo – which includes 50,000 cases of of whisky – by the inhabitants of an isolated Scottish Island of Todday in the Outer Hebrides. The town had been largely unaffected by wartime rationing, until its whisky supply ran out, making their discovery all the more triumphant.

Eagle-eyed whisky lovers will have spotted an appearance of The Macallan in the most recent James Bond adventure, Skyfall. In this clip, Bond deliberately misses a shot glass of The Macallan balanced on the head of Bond girl Severine declaring that it would have been a “waste of Scotch” to Bond villain Silva, played by Javier Bardem. A bottle of The Macallan 1962 signed by cast members of Skyfall, including Daniel Craig and Javier Bardem, raised £9,635 for charity when it was sold at auction in 2013. The label of the donated bottle bore the signatures of villain Javier Bardem, Bond girl Bérénice Marlohe and Bond himself, Daniel Craig, who all appear in this scene.