It may not be the most likeliest of pairings, but a pop-up cocktail bar in London is giving guests the chance to sip a cocktail while petting a live owl. 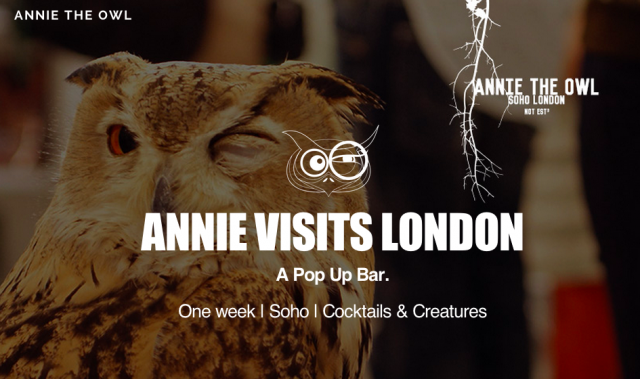 In a first for the city, Annie the Owl will open in Soho next month from 19 March to 25, with guests able to get up close and personal with a number of birds while enjoying a cocktail or two.

As its name suggests, Annie the owl is the star of the show, who will be joined by six of her friends, accompanied by a professional falcon trainer.

The concept is based on Tokyo’s owl cafés, where visitors routinely sip a coffee surrounded by a number of feathered friends.

The quirky cafe will open only between the hours of 8pm to 2am in respect of the birds’ nocturnal nature.

Sam Sheiky, curator for the event, said: “There will be a minimum of four to five owls and professional falcon trainers, running for two hour slots. It is for a good cause and Londoners will have fun. We have spent lots of time taking care of animal welfare and making sure the owls will be comfortable.”

Tickets, which are being issued by ballot, cost £20 and include two cocktails. The profits from the stunt will go toward The Barn Owl Centre charity.