It seems to be rather futile complaining about macro breweries, their [shady] business tactics, and their [shoddy] products.

But last night during the Super Bowl, there was a commercial for Budweiser that was clearly a shot at the entire craft beer community. All my fellow lovers of “fussy” beer were immediately up in arms; blogs have already been posted commenting on the commercial and what it means for the beer industry at large and the craft beer niche in particular.

Like I said, complaining about this is essentially just screaming into the void. In fact, responses like this are probably what Anheuser-Busch/InBev expects and wants. Their name and product are the hot topics of the moment; that kind of publicity can’t be bought. Not that that beer nor that brewery is in any way lacking in mainstream recognition, though.

When I first saw the commercial I was aghast. Not because Budweiser had insulted me (they hadn’t), but because they took the route that they did. One thing I’ve noticed about macro beer commercials (and Budweiser products in particular) is that for the last several decades they never actually claim their products are any good. They are simply 30-second comedy sketches with their brands attached.

And up until last night, the major macro breweries hadn’t really acknowledged the existence of craft beer as a negative thing (if at all). There was, however, a fairly recent Miller Lite commercial in which they said something along the lines of “…this lead to brewmasters admiring their craft,” but it was fairly neutral, if not complimentary (albeit ridiculous; as if Miller Lite had anything at all to do with perpetuating the craft beer movement).

With their “Brewed the hard way” commercial, AB/InBev essentially said (with a stone straight face) that no one drinks Budweiser for the taste! It was also a proverbial middle finger at the craft beer industry as they threw down the gauntlet and essentially said, “Now what are you gonna do about it?!”

To take that approach requires either chutzpah of steel, or complete and total imbeciles at the helm. Perhaps both?

What’s really funny was the fact they came across as stereotypical buffoons in the process. I’m surprised they didn’t have “Meathead Rob Lowe” as a pitchman saying “Pumpkin peach beers are for pussies! Real men drink Budweiser!” and absolutely mean it. That was the implication, after all.

Now, there are a million ways to react to this commercial, as people and craft breweries already have done on social media. So this blog is admittedly just another teardrop in the ocean. There’s nothing I can really say, not even less than 24 hours later, that hasn’t already been said. All I really want to add to the conversation is that this commercial isn’t something to be angry about, but something to be viewed optimistically. It marks a pivotal point in the paradigm shift of the entire beer industry. Gandhi supposedly said, “First they ignore you, then they laugh at you, then they fight you, then you win.” Clearly, we’re well into the third phase as we’ve seen numerous attempts by ABI to buy up distributors, bully the competition with litigation, and lobby at the state and national level for more ridiculous regulations that only harm small breweries. This article at ithinkaboutbeer.com does a great job of rounding up some of the most egregious examples.

It’s actually something worth celebrating, because we know what’s coming next. 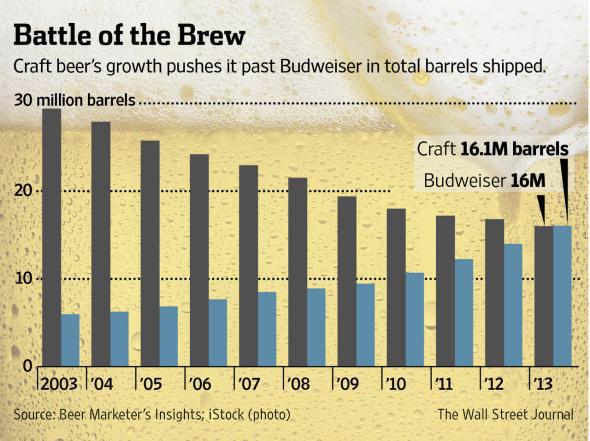 Chad Polenz is a 38-year-old IT professional by day and a beer blogger by night. He posts daily beer reviews on his blog ChadzBeerReviews.com. He also writes about beer events, news and trends for the Times Union newspaper of Albany, NY at blog.timesunions.com. Mr. Polenz recently co-authored his first book “The Handbook of Porters and Stouts” which is available for sale online and at most major book retailers (portersandstouts.com). Chad is an award-winning homebrewer, a beer judge, and a Cicerone Certified Beer Server.