Dogs often form an integral part of the winery, so much so that they become part of the family, eulogised in books and websites and immortalised on wine bottles. 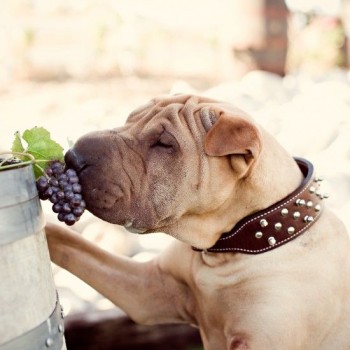 Wherever wine is made, it’s likely that a canine companion won’t be far away, stalking the cellar or vineyard. Having sifted through dozens of winery dog mentions online, we have pulled together a few of our favourites, finding that for many a winery dog, it really is a dog’s life.

Do you know of a much-loved winery pooch? Please send us your pictures by emailing lauren@thedrinksbusiness.com, or tweeting us @teamdb.

Meanwhile, scroll through for a look at some of the winery dogs currently marking their territory at wineries across the world…

This is Stella the lurcher, whose breed is a cross between a greyhound and deerhound. She can be found at Poe Wines in California’s Anderson Valley gulping down whole bunches of grapes. POE was founded in 2009 by Samantha Sheehan, an advocate of the vineyards and wines of Burgundy and Champagne. Its brand was designed to showcase California’s “incredible and distinctive terroir”. It only produces single vineyard wines in a bid to show this distinction.

Tug is the official mascot of Pearmund Cellars in Virginia, available for “belly rubs” from 10am to 6pm seven days a week. He can often be found lounging around the winery’s 25-acres of vineyards with a bottle of Cabernet Franc. Pearmund Cellars is located in the foothills of eastern Fauquier County and boasts a 7,500-square-foot geothermal winery and vineyard producing Chardonnay, Viognier, Riesling, Late Harvest Vidal, Merlot, Cabernet Franc, Cabernet Sauvignon, Petit Verdot and Ameritage. 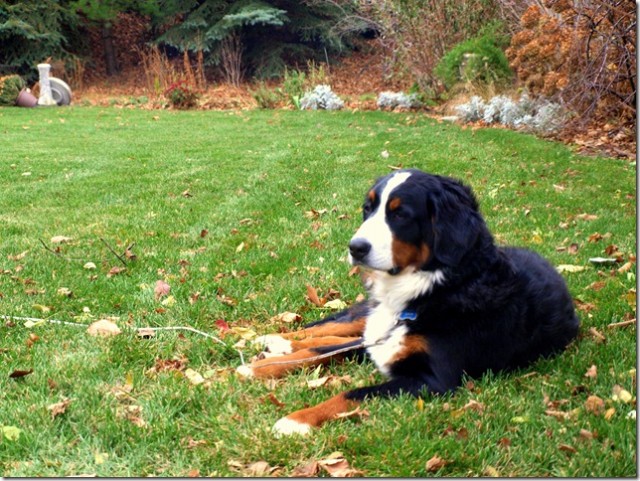 Brix Cuvee Stegenga is a Bernese Mountain Dog and an integral part of the Bowers Harbor Vineyards in Michigan. Named after the sugar concentration in wine grapes, which is measured in degrees Brix, he continues a line of wine dogs which have previously called the winery home. Brix even has his own sparkling wine named in his honour, Brix medium sweet bubbly. Founded in 1991, Bowers Harbor Vineyards comprises five distinct vineyards planted with Pinot Grigio, Pinot Noir, Cabernet Franc, Riesling and Chardonnay to name a few.

Charlotte and Matilda are often seen greeting visitors to Ballabourneen in Australia’s Hunter Valley. Matilda, a cattle dog cross kelpie, was bought from a local RSPCA as a pup. Her worst habit is listed as “eating a fellow wineries duck” which earned her the nickname “Mackillda”. Two years ago Matilda lost her leg in a road accident and is now a “proud Tri-pawd”. Her companion Charlotte, also a kelpie cross cattle, is the winery’s latest canine addition. 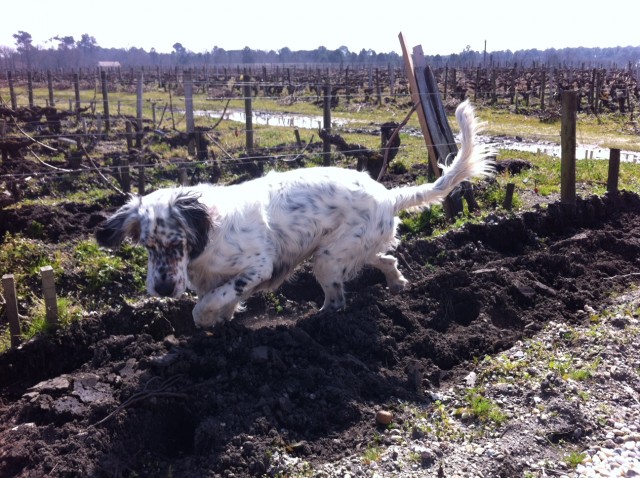 Happy, the English setter, loves a good romp through the vineyard, spotted here at Domaine de Chevalier in Bordeaux by db’s own Gabby Stone. 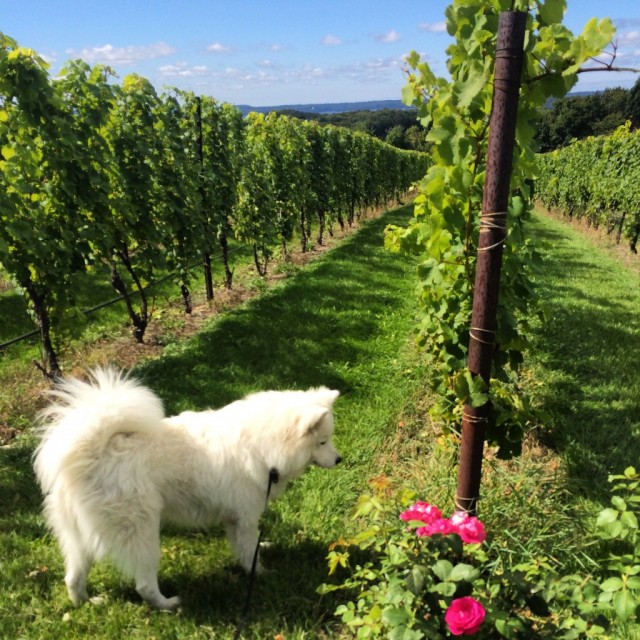 Sitka arrived at Chateau Grand Traverse last year joining eight-year-old Chaboo, or “Boo”, continuing a long line of Samoyeds that have lived at the winery. He can often be found “chewing on anything left around the office, pestering his big brother, or cheering on the Michigan State Spartans”, according to his owners. Chateau Grand Traverse was established in 1974 by Ed O’Keefe Jr. – an Irish, Olympic gymnast, Army Green Beret Special Forces paratrooper and NYC undercover narcotics agent from Philadelphia.

Habanero Renzoni is the official winery dog of Robert Renzoni Vineyards in California, seen here assessing the vineyards latest produce. So loved is Habanero that the winery has named its own-produce pepper sauce after him, appropriately named Leila’s Habanero Pepper Spice. “Made in honor of our winery dog ‘Habanero’”, the sauce is a blend of Habanero chile with fresh carrots, onions, garlic and a hint of lime juice.

Stop into Muscardini Cellars, the home of Sonoma Valley Wines in Kenwood, and you might just be served by this four-legged sales clerk. Beni the Golden Retriever proudly presides over the establishment with his owner, winemaker Michael Muscardini.

Ranger is the live-in mascot of Harney Lane winery in Lodi California and can often be found checking vineyards (usually riding in the truck) or “working” in the winery. “Be careful to not start a game of fetch you can’t finish!”, warns his owners George and Kathleen Mettler. Harney Lane Winery is a family-run winery founded in 2006, although its farming heritage stretches back to 1907. It produces a range of wines including estate Zinfandel, Albarino and old vine Zinfandel. 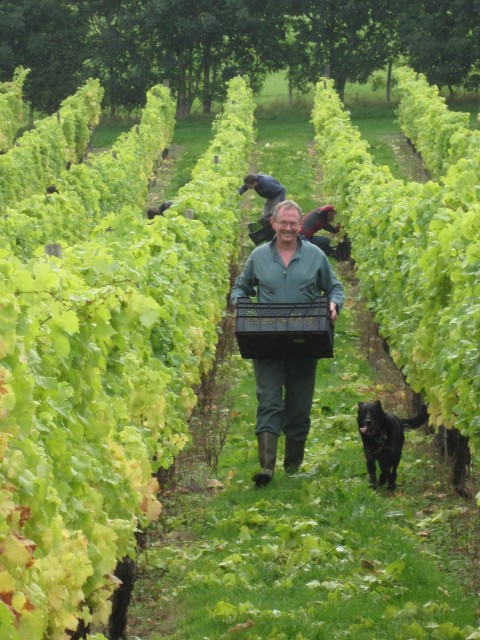 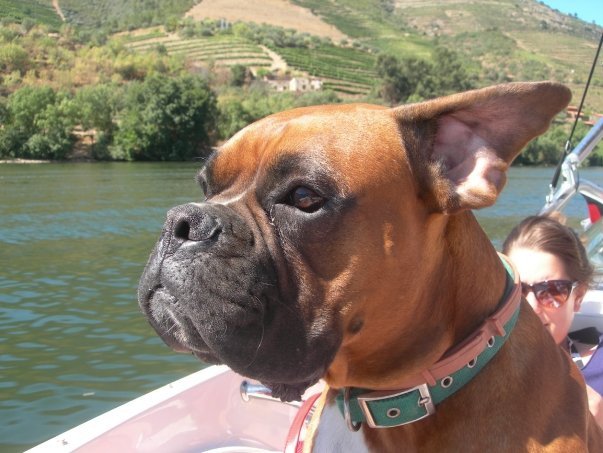 Paul Symington’s beloved boxer Mungo is often seen patrolling the Douro River by speed boat. He’s so famous he even has his own Facebook page. Symington presides over Symington Family Estates, which includes Graham’s, Cockburn’s, Warre’s, Dow’s and Quinta do Vesuvio in its portfolio. 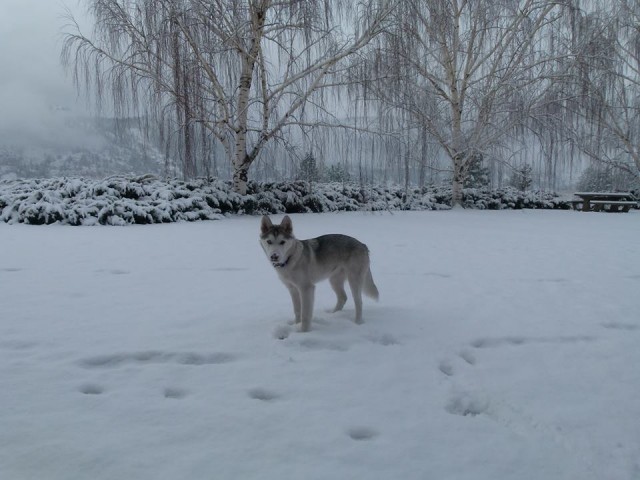 Chinook, mascot of the Blue Mountain Vineyard & Cellars in Okanagan Falls, British Columbia, is no stranger to the white stuff.