The long-awaited new Miller Lite ads have arrived from the brewery’s most recently appointed ad agency, a trendy place full of trendy people, located in trendy Los Angeles. So what have these clever folks come up with?

Miller’s press release makes quite a deal out of the fact that the ads were created using a high-definition GoPro® camera immersed inside a 700-gallon beer tank. Here are three still photographs of what that little underwater (under-beer?) camera captured. (What is actually being done to the beer to make it swish and bubble so exaggeratedly is not disclosed.) The actual ads amount to multiple shots like these, one after another, running for most of the commercial, 22 of 30 seconds (or 11 of 15 seconds). As such, they represent the dominant focus of the advertising. 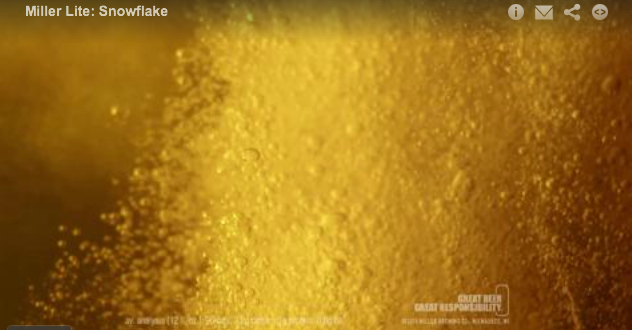 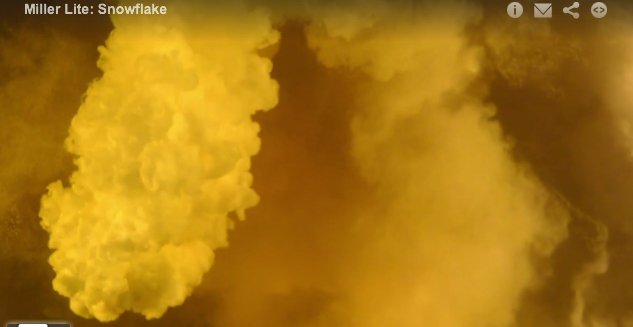 Ad Age opined that the commercials make the beer the star of the commercials. Not so. The commercials make all the frothy yellowness (or yellow frothiness) the star. Beyond one bit of spoken copy yakking about darker color and more flavor, there’s absolutely nothing here to make any particular brand of beer – much less, the one that paid for the commercials – the star. Heck, if they didn’t tell you it was beer, the frothiness could easily be something else you’ve seen after a visit to the bar, but let’s not go there.

When Miller Lite announced their newest ad agency, we said: [Success for Miller Lite] “… lies not in white cans, Los Angeles, retro-hipness, or even ‘talking about the beer’. The answer lies in saying something about Miller Lite that is factual, and at the same time persuasive to enough beer drinkers to cause them to try the brand, come back to the brand, or choose the brand more often. This is what sound marketing strategy does.” (Early in 2014, when Miller Lite named a different ad agency they later fired, we said much the same thing.)

Yellow frothiness is not unique, not distinctive, and not persuasive. It is not really focusing on the beer, certainly not in the sense of focusing on a specific property of one beer. It isn’t even very entertaining to watch. Perhaps commercials yet to appear for Lite will add a focus with real substance. Some clever and persuasive claim to uniqueness. Some good reason to call for this particular brand. One can hope.

But if none of that is forthcoming, Miller Lite will continue to suffer from the same trend (without the “y”) that has plagued it for years: The lack of a sound marketing strategy.