A US brewery has been forced to apologise for using a robot-like image of Mahatma Gandhi on one of its beers. 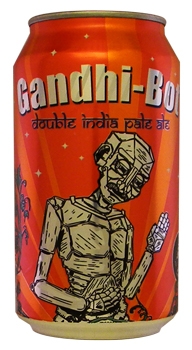 Produced by the New England Brewing Company in Connecticut, Gandhi-bot is an “intensely hopped double India pale ale” which, according to its website, is an “aromatic and fully vegetarian” beer ideal for “self-purification and the seeking of truth and love.”

However its packaging, which depicts a robot image of Gandhi with its hand held up in a blessing, has sparked controversy.

Indo-American statesman Rajan Zed said in a statement that “peace icon” Mahatma Gandhi abhorred drinking and that selling a beer named after him was “highly damaging to his legacy” and hurt the feelings of Indo-Americans and Indians.

Gandhi led a non-violent resistance against British rule in India and was assassinated in January 1948 just months after the country achieved independence.

According to reports by the BBC, a petition was filed at a court in the southern Indian city of Hyderabard which branded the beer can’s image of Gandhi as “condemnable” and punishable under Indian law.

The company has since apologised for any upset, but has given no indication that it would be withdrawing the beer.

Matt Westfall, head brewer and partner at the company said in an email to the Press Trust of India news agency: “We do apologise if the good people of India find our Gandhi-Bot label offensive. Our intent is not to offend anyone but rather pay homage and celebrate a great man who we respect greatly,”

He added that he had hoped the product had inspired people “to learn more about Mahatma Gandhi and his non-violent methods of civil disobedience. So many Indian people here in America love our tribute to the great man.”

“We hope that you understand our true intent and respect the method and the freedom we have to show our reverence for Gandhi.”